Spend 1 supply and exhaust Venturer: Place 1 supply or ammo on an asset controlled by an investigator at your location. 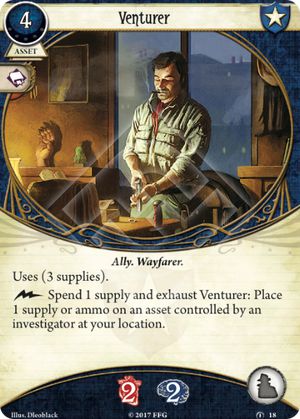 This card starts off fine and only grows better with time. Levelled up guns can be very powerful and this card keeps them around longer, whether its a Lightning Gun or just a .45 Automatic. Dont forget that "Skids" O'Toole can use this to fuel a Lupara or .41 Derringer. There's also the power combo of Venturer + Ornate Bow to get 2 shots without stopping to reload.

So the effect is good, worth the price even, 3 extra ammo tokens and a bit of expendable tank that you'll actually be glad to kill-off when he's empty, this means that the occupied Ally slot is less of an issue since you don't need Venturer to stick around.

To further integrate Venturer in a deck consider Inspiring Presence to speed up how quickly you reload a gun or even Calling in Favors to juggle him with Beat Cop and refund the charges. A charisma based Roland Banks deck with Beat Cop, Venturer and Dr. Milan Christopher actually plays very smoothly (And Leo Anderson similarly so with Leo De Luca).

Obviously you need targets if you pick this for your deck, firearms are the obvious target, the less obvious ones include: Strange Solution, Lockpicks, First Aid and Flashlight. There's also Painkillers, Smoking Pipe and Liquid Courage but those usually don't warrant Venturer charges.

Strange Solution is an interesting standout in that lineup, if you're playing Rex Murphy then keep this interesting interaction in mind.

I've never been a huge fan of firearms, due to their limited ammo. Do I want a .45 Automatic, which costs 4 and I can use 4 times, or Machete/Fire Axe/Survival Knife, which are cheaper and I can use all day?

However... Venturer changes that. An ally that reloads a firearm, and then provides a damage soak before shuffling off? Sounds good. Oh, and he's non-unique, so Leo Anderson can easily play him. For Leo, he's way better than Extra Ammunition - no XP, costs only 1 more, and gives that 2/2 soak.

In the Forgotten Age I picked up Shotgun after the first scenario. I'd neglected it for a long time, as that 2-ammo was a killer. Now, though, with a couple of Venturers, well, Leo isn't flush with ammo - but he does have enough.

He synergises well with Calling in Favors, too; Beat Cop is the same price, so make sure Leo hires some of those for the Jungle, too.

For other investigators, he'll take a bit more investment; you'll probably want Charisma, as I still reckon Beat Cop is still too good to pass up for most guardians (or possibly Art Student for Roland) - but if you're going down the Lightning Gun or Shotgun route, I think it would be worth it!