Spend 1 supply: Investigate. Your location gets -2 shroud for this investigation. 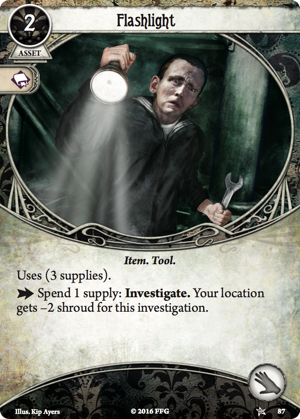 One of the best cards in the game on Expert. Flashlight is consistently very useful, so much so that I run it in the majority of my level 0 Expert decks.

The power of Flashlight lies in the fact that it can reduce test difficulty to 0, if it targets a 1 or 2 shroud location. That means every token except the autofail will succeed. Even the -8 is no threat! So Flashlight essentially equals three guaranteed clues from low-shroud locations. That's very strong.

The average token in the Expert chaos bag is usually somewhere between a -3 and -4, which means directly investigating a 2-shroud location with an Intellect value of less than 5 tends to go very poorly. Yes, you could just let the party's Seeker handle the low-shroud locations; but it's extremely useful for the non-Seekers to chip in with a few clues. The team can advance the Act deck far faster if the Seeker gets some help. Flashlight is one of the most reliable ways to provide that.

Flashlight does face competition from other cards that can help low-Intellect characters pick up clues, cards like Scene of the Crime or "Look what I found!". But it can get more clues than any one of these events, albeit at the cost of more actions.

A further benefit of Flashlight is that it stays in play when its charges are exhausted. This makes it useful fodder to protect your essential assets from the likes of Crypt Chill, Pushed into the Beyond, Corrosion, etc.

Three more synergies should be mentioned. First, Flashlight turns Double or Nothing into a de facto Deduction (if used on a low-shroud location), which is a very nice play. Second, Flashlight works very well in conjunction with "Look what I found!". Investigate a 3 or 4 shroud location with Flashlight and it is guaranteed that you will either succeed, or you will fail by 2 or less and be able to play "Look what I found!". Third, if your Seeker friend is running Arcane Insight, you can combine it with Flashlight to near-automatically crack 3-4 shroud locations, too.

So under what circumstances should a level 0 Expert deck not run Flashlight? The first is if you can't afford to give up a hand slot. This isn't often the case with level 0 decks, but maybe if you were really excited to run Baseball Bat, Flashlight would not work. Of course, XP increases the value of hand slots, and adding powerful two-handed assets like Lightning Gun may necessitate dropping Flashlight down the road.

Seekers can also often skip Flashlight. If you can investigate with a base Intellect of 6+ (as all Seeker builds should aim to do), and your class provides plenty of efficient ways to boost yourself further, Flashlight's ability to auto-succeed on 1-2 shroud locations ceases to be that significant. Flashlight still isn't terrible, as +2 to three investigate tests is a decent return, but it's no longer a game-changer. Seekers can generally find more efficient investigation boosts from their own class, and leave Flashlight to their teammates.

TL:DR Grab Flashlight if your is low or mediocre, it's outright amazing solo but looses it's luster progressively with player count, it picks up again on hard and expert as a means to cheat low difficulty locations.

The ubiquitous Flashlight is at this point a legacy card, its one of the more decent cards in the core set, but it is a little specific.

When a difficulty test is (0) it's automatically passed regardless of what token you reveal (except if you get ), this means that a Flashlight outright wrecks easy locations, this is a good means for 1, 2 and 3 characters to help in the clue game. It has combo potential with some skills, netting you guaranteed hits with Double or Nothing, Deduction, Resourceful and so on.

In higher difficulty this ability to cheat some locations is even better, those -5's and -6's really don't impact you when everything but succeeds.

Flashlight isn't a must have though, when player count grows and the clues start getting placed in bulk Flashlight just doesn't cut it anymore. A solo character who is bad at clues might be able to finish 2 easy locations with just 1 flashlight, and cheat the hard locations with other tricks, in 3-player it'd only get you through one location! Of course if the full team is doing their thing then beating one location isn't terrible rate, but specialization is the name of the game in multiplayer and a fighter spending 4 actions, 2 resources and the card slot to beat a 1 or 2 difficulty location isn't the best use of his time at all.

That said, Flashlight isn't bad for flex characters in multiplayer, dudes like Roland Banks who can pretty even-handedly do clues and combat, Wendy Adams until she gets Lockpicks, Sefina Rousseau as a means to conserve Rite of Seeking charges.

It's a fine card, but it's definitely better on higher difficulties and lower player counts (ideally: Solo).

Roland is a man who works alone,

and when hes searching a dark room,

or walking his dog out in the park,

when the light begins to change,

trying to see can be a pain

its hard to see things when its dark

Hes sure there's something useful somewhere fairly near

He uses his flashlight to find out what is over there!

Solid card, should be a 2 of in any investigator's deck unless you're a dedicated these-hands-are-for-shotguns-only fighter, or Agnes who can't investigate her way out of a paper bag (and who's spells don't work with this action). Even when not being used to cheese the rules it can bring even terribly shrouded locations into acceptable investigation reach which is pretty nifty.

the FAQ bump says everything you need to know about playing this in higher difficulties. For 2r + 1action you get 3 clues off of 1 or 2 shroud locations, with the single token being the only exception. The value of this would be good if it was almost twice as costly on expert, where -4 is the average you're going to pull from the bag. This saves you actions and cards that you will need bumping tests elsewhere.

So stock up on batteries guys.

Difrakt · 1180
I think Pete might also be someone who doesn't really need these - Duke is likely to do all your investigating, and his ability doesn't stack with the Flashlight. — TheNameWasTaken · 3 7/1/17
And yet on Expert, where the Expected Value of the token modifier is -4, Duke himself does not quite cut it. On Expert, Flashlight is still a great choice for Pete! — Darthcaboose · 246 7/4/17
I am not sure why you say not use with Agnes? As I read it reducing Shroud would make it equally effective with all and combined with right of seeking very effective? — Stebb · 2 7/19/17
Yep, running Flashlight is a good idea for 2-intellect investigators like Agnes and Zoey. — CaiusDrewart · 2816 7/25/17
@Stebb Rite of Seeking can't be combined with flashlight — SerpentofSet · 1 12/23/17
10

As one of my friends put it, "Someone who isn't normally expected to get clues successfully getting 2-3 clues is the difference between winning and losing a scenario in multiplayer"

Arkham, at its core, all about efficiently getting through the act deck, and while there are combat or movement focused acts, the overwhelming majority of scenarios are advanced primarily through investigation: you are, after all, an investigator.

So while a strong, two handed gun, or a deck with every card focused for tackling enemies and threats, is going to be very good at clearing those threats you face out fast, you need to ask yourself why you are removing threats. In general, killing enemies is done specifically to allow you to safely go get more clues. So if your just... not assisting with clues at all, it doesn't matter that you kill enemies twice as fast. Who cares that you killed a 3 health enemy in 1 action instead of 2 because you got rid of your .45 really early in a campaign, if you are going to spend every turn sharpening your sword and polishing your gun rather than using that action to actually help win the scenario?

This doesn't mean every deck needs flashlight: Mystic, Seekers, and arguably Rogues don't really need it usually. Survivors have other tools but often want Flashlight as well. But I see so many guardians falling for the trap option of being 'pure combat' and trying to take that entire dimension of the game on alone, and abandoning all else, and that is a huge mistake.

So Flashlight teaches us this: Your deck needs plans for things to do that actually help your team win the scenario, rather than just endlessly handling threats. Yes, even in 4 player multiplayer. Yes, even if you are Mark.

Killing enemies super efficiently isn't the same as cluvering really efficiently. A seeker, mystic, or rogue just nomming up clues faster than normal is helping the entire team get through the scenario faster, reducing the amoung of encounters everyone faces, and freeing up others to explore other easier locations, regain resources, or explore because they are 'overkilling' a location and gathering faster than normal.

But a fighter like Guardians or Survivors killing the maybe the small handful of 3 health enemies they face early on in a campaign doesn't help anyone else. It just helps that fighter, because no one else really cares how fast the enemy dies, just that it isn't attacking them while they seek out clues. Outside of bosses (who, again, you spend a minority of your time fighting so being a bit less efficient at that early is totally ok), doing lots of damage very fast only helps the team if you can, after efficiently killing something, go on to do other helpful things! So have tools to do other helpful things!

Those tools don't have to be Flashlight, and eventually you may need to leave it behind to get tools to deal with escalating threats, but you need to do more than slap two Evidence! or Look what I found into your deck and calling it a day even once you leave Flashlight behind. Almost every investigator has good options for replacing it, even if it as simple as getting a 'resources for stat boost' card that can boost your investigates.