: Fight. You get +2 for this attack. This attack deals +1 damage. If a or symbol is revealed during this attack, discard Baseball Bat after the attack resolves. 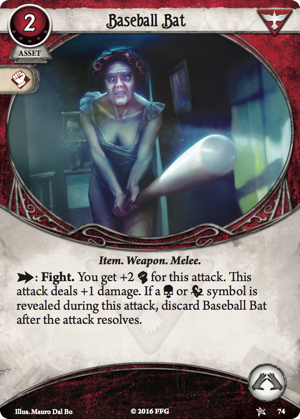 Now that William Yorick joined the ranks, Baseball Bat has found it's love. His ability is meant to retrieve assets from the discard pile. The risk of splitting the bat during a swing is huge (3 out of 16 tokens), so besides Yorick's convenient retrieval method, there are two more investigators likely using the bat: Wendy Adams can reduce the risk of breaking the bat in the first place with her draw-again-ability, and Agnes Baker could use it as a fallback weapon together with her spells.

With the bat in both hands you can hold ground against a group of enemies and deal 2 damage with each blow consistently. The +2 is a dire necessity for investigators who are weak in the knees.

Synisill · 725
Any build with Scavenging can make reasonably good use of a baseball bat. Wendy most especially. In the standard chaos bag, there are 2 skulls and one tentacle out of 17 possible tokens. So you have an 18% chance to break the bat each time you make an attack (and you do get the benefit of the bat on that turn). However, with the ability to redraw her chaos token, Wendy greatly reduces the odds of pulling one of those 3 tokens twice in a row. Additionally, if she *does* pull it, she can scavenge the bat back in hand - at that point the 2 cost is pretty reasonable to replay it. So the Baseball Bat is mostly good as an addition to a deck that is already planning to run Scavenging. Outside of that, the risk and two hand cost is probably way too high. However, if you have such a deck, and you need a weapon, the Baseball Bat is a reasonable choice. — Ergonomic Cat · 32 6/14/17
I include the bat in my own Wendy builds, too. You illustrate the combo with Scavenging a way too easy, i think. First, 18% with every swing is pretty chancy - everytime you draw the skull with Wendy, you have to decide if you prefer to lose a card and maybe the retry or let the bat hit, which leaves you in a very unfavorable position, if this hit does not kill the beast. Together with Wendy's Intellect of 3, the combo is hard to pull off. Other investigators with higher Intellect, on the other side, are unlikely to use the bat at all. Just my objection, please feel free to use the combo. Would be nice to hear of good results here on this page, i like the unique feel of that weapon! — Synisill · 725 6/15/17
I reckon that the Baseball bat is a decent backup-weapon for Agnes Baker. She's a spellcaster, so she will often have hands to spare. She can also use Shrivelling and her unique "Deal 1 damage if she takes Horror"-ability to handle most threats. But for low Fight, 2 hit point monsters such as ghoul minions and mobsters, this is a decent tool for her. Most other investigators have better options, I think. — olahren · 688 7/25/17