After you successfully investigate by 2 or more, exhaust Scavenging: Choose an Item card in your discard pile and add it to your hand. 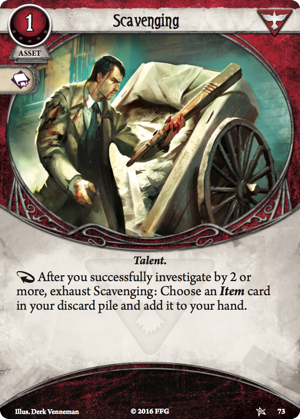 Scavenging let's you repeatedly re-use "items" that are in your discard pile.

Some of most obvious cards in the current card pool that work well with Scavenging are items you discard to get benefits (like Knife), items you discarded because they ran out of "charges" (like Flashlight or .41 Derringer) or cards that simply tend to get discarded faster due to forced card abilities (like Baseball Bat.)

When you look closer, bringing items back into play with Scavenging doesn't come cheap. To get an item back from your discard pile into play you:

1) have to use one of your precious actions to investigate;

2) have to investigate succesfully by 2 or more;

3) have to use another action to play that item you just got back into you hand;

4) most likely have to pay recources to play the card.

Looking at these costs, it becomes clear that cards that combo nicely with Scavenging are cards that trigger another beneficial effect when investigating (succesfully.) A great example of such a card is Burglary. Investigate succesfully with Burglary while triggering Scavenging both gives you 3 resources and let's you take back a discarded item (which you can pay for with the resources you just gained.)

It's also beneficial if the items you bring back to your hand have no resource costs. In the current card pool cards like Leather Coat come to mind. With Scavenging Leather Coat becomes a resource-costs-free and re-usable damage sponge.

Cards like Sure Gamble increase your chanches of investigating succesfully by 2 or more, as does Wendy Adams' special ability. Speaking of Wendy, you can fuel her special ability by discarding an item card, which you can bring back later into play with Scavenging.

At the moment I don't think Scavenging is a "great" card. It's not a cornerstone that decks are built around, but examples like the Burglary combo show that it has good potential. In the end, Scavenging is as good as the item it lets you retrieve from your discard pile.

UPDATE 17-1-2017 After the release of The Dunwich Legacy, I took a look at some old reviews I did to see if the new cards had an impact on the reviewed cards. And man have I found a good one. In my initial review on Scavenging I mentioned the nice combo with Burglary That combo has even become better with new investigator Rex Murphy. Normally triggering Burglary's resource gain replaces gaining a clue when investiging succesfully. But when Rex Murphy uses it he still gains a clue due to his special ability.

Heyenzzz · 5296
Much like Agnes' special card with spells, this card will become better and better as time goes on as well get more items that are useful to get back again. — Kamalisk · 239 11/29/16
Commiting Wendy's Amulet during Investigation and returning it immediately with Scavenging seems as great infinite combo for successful investigations. — Yury1975 · 1 12/11/16
Of course, you don't have to put the recycled item into play. You can always use it as a re-usable skill test icon. Rabbit's Foot, with its wild icon, is particularly good for this use. If an item with 2 icons is ever released, I could see Scavenging becoming even more useful. — Herumen · 1652 12/27/16
Scavenging is much to recover items after commiting them. Stuff like rabbit's foot with a ? are very good candidates. — Django · 4428 5/29/17
@Django You cannot use Scavenging to get back an Item card that you've just committed to the same investigation attempt. What you propose would only work 2 items in tandem: you could commit 1 to a skill test and retrieve another 1 from the discard pile. — Synisill · 775 6/1/17
Does scavenging trigger off of rite of seeking since it is still investigating? — Vicoforbes · 18 4/3/18
"1)" often doesn't come into it, if you're already investigating this is a free action. "3)" and "4)" shouldn't come into the evaluation, just compare Scavenging to the card draw action. Its better than a card draw because you get to choose which card you draw, and its never a weakness. The real cost is in playing Scavenging itself, and its best played early-ish to make good use. Good with Newspaper (2) (has two intellect symbols), Stray Cat and Leather Coat. — shenaniganz11 · 9 10/27/20
4

I think that one of the most obvious uses here are not written. Ashcan Pete and Wendy Adams. Both discarding cards to use their abilites and can get them back for free.

I count it for free because for example with Pete+Duke you will be investigating anyway. When you have enough items to rotate. You can play Duke 2 times almost every turn after you have everything in play set up with this combo.

Scavenging can be used to recover Backpack, so you can drain your deck of items pretty quickly.

If you discard the Backpack with assets below it (by playing another body slot item), you can fill your discard pile with more targets for Scavenging.

This is especially useful for investigators with high and access to seeker cards, like Minh Thi Phan or Rex Murphy.

Django · 4428
Jesus; I'm starting to think Backpack might be broken. — SGPrometheus · 688 6/15/18
Backpack still costs 2 and an action to play, I would not consider this combo terribly broken unless there’s a way to repeatedly discount it like Fence for illicit. — Difrakt · 1180 6/16/18
There is. Charles Ross. — Myriad · 1157 6/16/18
I don't think backpack itself is OP. This combo can be, if you built your deck arount it. Even then it depends on a lot of factors: 1. Must draw and play scavenging as early as possibe. 2. The character must have a high int to trigger scavenging each turn. 3. The scenario must have many clues. 4. The scavenger's team must able to protect him from monsters. The result is that you always have 1-2 items for commiting to any test in your hand, which is great team support. Not sure if that's OP though. — Django · 4428 6/18/18
@Django - I disagree with your point #3. You can investigate even if there are no clues at a location. Furthermore, with Burglary you can even make resources while doing so. — Daerthalus · 12 6/18/18
@Django - your point #4 is just generally true of Scavenging and isn’t aided with Backpack (which arguably has the least useful commit icon) since the cards attached to Backpack can’t be commited, just played as if thy were in your hand. — Death by Chocolate · 1251 6/18/18
2

With the recent release of Stella Clark Investigator Pack, Edge of the Earth and now The Scarlet Keys, Scavenging requires an updated review as an incredibly strong and possibly broken card.

With Stella Clark expansion and the release of .18 Derringer and Old Keyring, Survivors now have access to a pair of the strongest level 0 item cards in the game that allow you do the two most essential functions with efficiency and reliability: clueving and fighting. Having these items as targets for infinite recursions means your clueving and fighting will always have a skill test advantage (and extra damage with the gun).

With Edge of the Earth, Survivors not only get access to Short Supply, they also get access to Schoffner's Catalologue, which makes recursion set-up quicker and more affordable. The EotE investigator Bob Jenkins also counteracts the immense resource cost recursion typically incurs.

With TSK, from my play experience, a Charlie Kane recursion deck that relies on allies to bolster skill test and recursion of items to further augment skill test backed by cards that play on economy (Gregory Gry) is incredibly powerful and versatile.

The recent release of investigator cards now makes Scavenging a foundation for recursion deck building and a powerful archetype.