After you succeed at a skill test by 1 or more, exhaust Lucky Cigarette Case: Search the top X cards of your deck for a card, draw it, and shuffle the remaining cards into your deck. X is the amount you succeeded by. 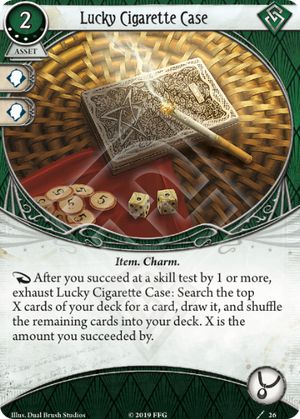 I'm not exactly breaking any ground by saying Lucky Cigarette Case III is good. But I did want to take a little bit of time to write about what has proven to be a rather dominant card. I've noticed that at my table just about every Rogue deck takes this card. And people are choosing to play Rogues just because of this card. It's that good.

Lucky Cigarette Case III does not need a lot of support to be awesome. You don't need to be a dedicated "oversucceed deck" to make this card great. Passing skill tests by 1 or more is something most investigators will routinely do almost every round. This will draw a lot of cards, with the upside of a fair amount of selection, for just about anyone. Of course, if you are playing oversucceed enablers, like Lockpicks (and why not? These are some of the best Rogue cards in any case), all the better. You can find some extra synergy for the Lucky Cigarette Case here and there among the Rogue class (Trish with her Myriad cards, Winifred with her natural emphasis on oversucceeding, Parallel Skids with his free skill test every turn), but really, this card is good for just about everybody. A Preston deck aiming to avoid the chaos bag probably doesn't want this, but in my opinion that's really about it.

A particularly common setup is to use Relic Hunter to get two Lucky Cigarette Case IIIs in play. It's a truism in card games that a great strength of card draw is that it draws you into yet more card draw, and so on. (This is probably even more true in Arkham than other comparable games because here the penalty for drawing through your whole deck is so minor.) So, you'll find that once you have two Lucky Cigarette Case IIIs in your deck, you're much more likely to get one into play early, and once that's in play, you can use to to quickly dig out the second. Then you'll just fly through your deck.

What can you do with all this card draw and selection? Well, whatever you want, really. The sky is the limit. I'll say that there's particular synergy here with the Myriad cards like Three Aces, Astounding Revelation, Segment of Onyx, and so on. Also, once you have a ton of draw, be on the lookout for cards that are useful but cheap in resources and actions. Cards like Shortcut or Quick Thinking, where the primary cost is the card itself, look quite appealing when you draw tons of cards every turn. Also consider ways to efficiently turn a surplus of cards into money--stuff like Cryptic Writings and Easy Mark. I'll also mention Dream-Enhancing Serum. Obviously, when you have tons of selection from a couple Lucky Cigarette Cases, it's not going to be hard to get yet another card out of the Serum every turn. And when you have that much draw, the extra hand size will matter.

Also, don't be afraid to intentionally draw weaknesses with this card. Some investigators, like Trish, have weaknesses that are very mild if drawn in just the right situation. So if the opportunity arises, it can be a nice play to cheaply dispose of a weakness like that.

So, a really great card, almost regardless of what your deck is doing. In fact, as far as my group is concerned, the other Rogue accessories might as well not exist. Is that a healthy balance? Perhaps not. But it's nice to have a card that makes people want to play Rogues, and this certainly qualifies.

This card is insanely good! Have you ever built a Rogue deck that was based on assembling a big combo? Well now you can assemble said combo much more quickly. All most Rogues will need to get decent digs is Lockpicks, but there are a few other ways as well, such as Well Connected and Money Talks. Money Talks is especially bonkers, because it's quite possible to build Rogue deck that can horde 50 or more resources. You'll probably be able to search your entire deck with that. Even if you don't have a way to oversucceed immediately, you'll probably occasionally draw a 0 on a test. It's also still an improvement on the original, because you only need to succeed by 1 instead of 2 to get a draw. Finally, if you're taking it as a 2-of without Relic Hunter, the second copy isn't a dead draw, as it has a generous for icons. Not bad for an asset.

Some specific combos to highlight (apart from those already mentioned):

Zinjanthropus · 205
I think the best thing about the upgrade is that you still get a card at +1 success and for larger success margins you can shuffle a weakness back into your deck. Drawing your weaknesses more quickly is always one of my concerns if I have a lot of unfiltered card draw in a deck. Drawing cards is still worth but I prefer to shuffle those weaknesses back in. Or draw them at an opportune time of my choosing. — TWWaterfalls · 852 11/6/20
If you have All In, you could actually theoretically reduce your deck to only weaknesses, or mostly weaknesses, then reshuffle your deck, shuffling the weaknesses back in. Can only do it once with the most recent taboo, though, sadly. — Zinjanthropus · 205 1/8/21
2

This is the only card which gives search ability for . Additionally, I think that this is the most powerful searching cards in AHLCG. Of course, No Stone Unturned could search entire deck, but NSU5 is event card, so that you only can play once per deck. However, Lucky Cigarette Case is asset card, so you can search once per round. Nevertheless, the number of cards you can search is large. In many cases, you could search at least 3~6 cards. I usually told that / has leak of searching tools, and that's the shortage of those factions; this is not true for now, due to this card.

Let me introduce strange combo. With LCC3, you could draw and use your powerful cards in your deck. After your deck only contains unnecessary cards, you can commit Daredevil. Then, your whole deck is dicarded. To do that, you need to remove skill cards (not all, but 1 icon only). Addtionally, your deck includes at most 1 weakness; you could discard 1 weakness in your deck by Daredevil. Generally, your deck contains 2 weakness cards, so you should resolve 1 weakness. However, Jenny doesn't need to do, since her signature weakness is attached to a location so that you don't consider it in the middle of the game.

elkeinkrad · 311
Weaknesses are shuffled back in the draw pile with Daredevil. — AlexP · 198 8/20/21
single card is not shuffled into empty deck. Thus, if your deck has one weakness and no proper skill card, that weakness is not shuffled back. — elkeinkrad · 311 8/21/21
I suppose that's wrong. Daredevil says you have to draw until you find a proper skill card. If your deck is empty and you have to draw a card you take a horror and replace your deck by your shuffled discard pile. — Tharzax · 1 8/26/21
Tharzax, are you saying you would continue to draw, reshuffle, draw, reshuffle, etc, until you take so much horror you are defeated? Just stuck in a loop of a skill-less daredevil commit? — FlarkeFiasco · 1 11/9/21
Daredevil says you "discard" cards from your deck until you find a proper skill card. Daredevil (2) says "reveal." Deck only reshuffled when you need to "draw" cards from empty deck. — Chris_yang · 2 12/29/21
2

I’m playing through TFA as Winnifred... and even with moderate success in all scenarios, she wants to spend XP. Every card can get better, every gun, and then there’s bonus stuff, like sharpshooter or hard knocks(4). Obviously.

With a bless happy Mateo and Stella, this card --comes alive--.

On the right checks (momentum+lockpicks), with the right bonuses, you can guarantee to succeed massively. Even on the -6, Mateo turns the auto fail into “get all your cards back again.” Search your entire deck for the card you need exactly right now. Or plan ahead, and assemble all three easy marks. And the fewer copies of a card you need, the more XP you save. Which means more upgrades, which means bigger numbers.

MrGoldbee · 1233
Also has ridiculous synergy with any ‘Exodia’ class myriad cards (three aces, pendant of the queen, easy mark, empower self). Also makes surprising find truly shine, which makes this a great pickup for Tony or Trish (often to the point of 2 of plus Relic Hunter). Almost laughably superior to the equivalent rabbits foot. — Difrakt · 1146 2/12/21
Rabbit’s Foot is actually almost as good. In Stella it’s fantastic. — StyxTBeuford · 12699 2/12/21
Rabbits foot suffers from two things: first, unless you combo off of something else a failed test is still a wasted action. You can build off of it but it takes time and setup. Second, rabbits foot is bounded by 0 in a way that LCC is not, and with lockpicks (or any other of many good rogue content) its very easy to search 4, 6, 8 cards in a way that rabbits foot very rarely pulls off. — Difrakt · 1146 2/12/21
Oh if we’re only talking the upgrades then sure, I agree LCC’s unbounded nature gives it an edge. But the action cost of RF is overstated. Survivors often purposely engineer failure for benefit- you can do damage, get clues, and gain resources and draw cards all while failing in Survivor. Rabbit’s Foot is core to that. The other thing RF does that LCC doesn’t is it curbs the opportunity cost of failure, which helps maintain momentum. LCC is easier to trigger once a round than Rabbit’s Foot for the most part, but both cards are effectively the same in the right deck. — StyxTBeuford · 12699 2/12/21
I think LCC is more of an upgrade than rabbits foot is, reducing the need to succeed to only being 1 up for the draw is probably enough of a benefit on its own, the main reason I never ran LCC(0) is because it would just never trigger when I wanted it to, it cost more cards to commit than I would ever get back. (which also becomes less of a problem as you get better rogue synergy cards) — Zerogrim · 241 2/13/21
On Winifred in particular, I prefer Relic Hunter over LCC (3). Winifred cares more about quantity than quality. On someone like Trish, the opposite would be true. — suika · 8500 2/13/21
I will say though, Rabbit's Foot 3 in a Survivor with Drawing Thin is very nice. Of course, Drawing Thin is good anyway, but don't knock RF 3 too harshly. It's a solid upgrade, even if LCC 3 is probably a stronger one overall. — StyxTBeuford · 12699 2/24/21