Only the first copy of each card in your hand counts toward your maximum hand size.

After you draw a copy of a card that is already in your hand, reveal both copies and exhaust Dream-Enhancing Serum: Draw 1 card. 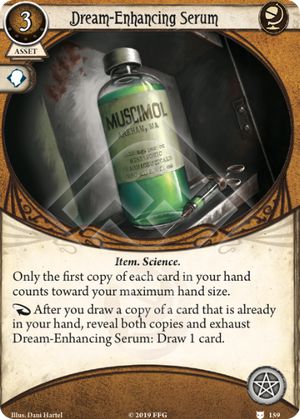 Printing this card was a mistake, it's very overpowered. By itself, this card theoretically allows a player to have about half of a 30 card deck in their hand, and that's without looking at Laboratory Assistant (multiples with Charisma), Arcane Enlightenment, or myriad cards.

So what's wrong with that? Well, once a huge chunk of an investigator's deck is either in their hand or played on the table in the form of assets, there are few remaining cards in the deck, allowing powerful card draw tools like Mr. "Rook", Cryptic Research, or The Necronomicon to quickly cycle through what's left and play power cards repeatedly. The 1 horror penalty for reshuffling the deck can be dealt with by soaking on an ally and replaying it (Laboratory Assistant or Mr. "Rook" are perfect for this).

The ridiculously overpowered The Necronomicon is a prime candidate for this type of abuse, but there are many other cards that become overpowered when played repeatedly, 3x Three Aces which also fuels the draw/cycle engine with resources and cards while auto-passing any test, Segment of Onyx/Pendant of the Queen, Extensive Research (0 cost with this strategy), or Ancient Stone are other possible examples of strategies that subvert the chaos bag by being testless ways of solving problems presented in Arkham Horror. Even merely good level 0 cards such as Shortcut (take repeated extra move actions), Mind over Matter (make any Fight or Agility test an Intellect test) or Deduction (pick up clues twice as fast or three times as fast with Deduction) become degenerate.

republiclifehuman · 33
On the other hand it’s impractical to hold your entire deck in your hand without incurring tons of horror and having to continually deal with weaknesses. DES seems fine to me- Pendant and Necro however should probably be looked at, as should Mr Rook who assembles these combos too easily. — StyxTBeuford · 2317 6/3/20
We've already seen decks in the past that cycled repeatedly, pre-Taboo there were infinite action decks using either Ace in the Hole or Quick Thinking + Double or Nothing and horror didn't prevent those decks from working. All those cards are on the Taboo list now, I definitely think Dream-Enhancing Serum is a problem. — republiclifehuman · 33 6/3/20
Third on it not being OP. Sure in concept I guess you could intentionally build a deck where you hold 20 cards in hand so you can sprint through the remaining 10, but that’s a minimum of 7 actions *just* drawing cards you don’t intend to use, and that’s assuming you have this card down turn-1. In practice this card is fun but honestly underwhelming, the draw is less likely to trigger than you’d think, and otherwise larger hand size is not really a practical benefit. This card subtly rewards you for keeping cards in hand, but hoarding resources is just not a practical way to win at Arkham unless it has secondary benefits — Difrakt · 777 6/4/20
I think it feels OP because there's a bunch of other cards right now that enable this thing to be set up so easily. Again, let the next round of taboos hit and then we can revisit this thing. Until then, if it feels problematic, don't run it. It also sounds like you used it in Three Aces Mandy, which is about the most broken deck that exists right now and definitely does not require DES to get there. — StyxTBeuford · 2317 6/4/20
I'm not sure I see how this breaks the game. I mean, I hear you on the theoretical nature of it, but doesn't this mean it needs to be tested? Build a deck with this card in it and see if you can break the game. Then come back and let us know. I'm curious. — LaRoix · 166 6/4/20
There are some videos at https://www.twitch.tv/cuherdirah/ that show how degenerate holding most of your deck in your hand can be. — republiclifehuman · 33 6/5/20
So, I watched one of those videos (Threads of Fate), and the player actually ended most of his turns with like 8-10 cards in hand maybe. You can already do that with Lab Assistant. I think the most broken-seeming card being used there was actually the Necronomicon. Combined with Sleight of Hand and KiP you can accomplish a ton of stuff actionlessly. It did convince me that Rogue Mandy is the most OP character though. Pre-taboo Rex doesn't even come close (though to be fair, he was probably never much good in true solo). — Zinjanthropus · 93 6/7/20
I also dont think this card is OP. Its a combo piece, but doesn't do a lot alone and costs 3 ressources which is much of a seeker. Combined with rook it gets much better, porentially drawing a card each time you use his ability, but rook alone is already pretty OP. I also played rogue Mandy through the dreamers campaign and she's totally nuts with these 2 cards. I think i got 3-4 times though my deck each scenario, including the first. — Django · 2799 6/7/20
Yeah, like I said originally. Three Aces Mandy, and really Mandy in general, is beyond broken right now. DES might help maintain her, but it certainly isn’t the most problematic card there- Rook, Necro, 3 Aces, Pendant all should be looked at. — StyxTBeuford · 2317 6/8/20
@StyxTBeauford: Sucks if they nerf Three Aces, though, as it's really only crazy good with Mandy. I've used it in Winifred, and it's okay because she can usually assemble it on her second go through the deck pretty reliably, but it really did not feel broken at all. Can't really argue on those other cards, though. — Zinjanthropus · 93 6/8/20
I rescind my original judgment- DES is ridiculous even without search support and makes any deck dedicated to drawing cards- eg any potentially degenerate Seeker deck- just way too strong. The rate of recycling is so high with the big hand size. I fully agree DES needs a taboo target if not a straight up ban. — StyxTBeuford · 2317 7/6/20
Yes and because ffg thinks this is a big problem, they are releasing a full suite of cards dedicated to support or profit of a big hand size in the Seeker Investigatir Starter... They want this to be a thing! They will not be tabooing DES anytime soon. — Skeith · 1274 7/8/20
2

This thing is extreemely annoying, I looked at the first mechanic, not liking it for the price, then looked at the draw mechanic, started loving it. Tried it and realized that very typically if i'm seeing a second copy of a thing, the first copy is in play or in the discard pile, so I came back to realizing that it's all about that first mechanic... Which I didnt like.

So. Big hand characters like this, Higher Education + Extensive Research, characters in strategies that make having cards in hand a distinctly useful effect.

Cute combo: With this in play and using Old Book of Lore you can snipe secondary copies of cards intentionally to artificially boost your drawspeed. HELLO Daisy.

This is a good card, it's just extreemely unrewarding if you try playing it outside it's niche.