While Shadow Agents is engaged with you, you cannot discover clues except by investigating.

Forced - After Shadow Agents is evaded: Discard it. 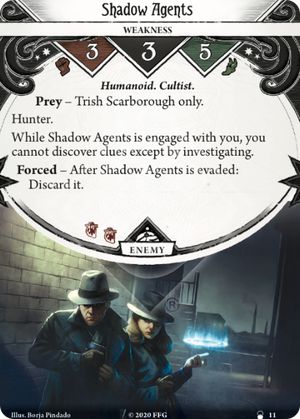 I'm thinking this has to be one of the easiest investigator weaknesses to deal with in the entire game, short of the ones you can afford to outright ignore sometimes. Most of the cards that help Trish deal with this weakness are cards she would have strongly considered running anyway.

Narrow Escape is already fantastic for Trish, this weakness practically makes it a cornerstone.

Obfuscation also helps with this and slides right into a completely uncontested slot (arcane). Since it's Fast, she can hold onto it until she needs it.

Cryptographic Cipher helps as well. Despite making the resulting investigate slightly tougher, at any 1 or 2 shroud location it's hardly noticeable and it lets her grab a clue AND discard her weakness without spending a single action. If it's sitting in her hand she could always Sleight of Hand it out as well...

Shortcut helps her position herself on top of a clue if she draws into this weakness at a location with 0 clues.

...and if there are no clues around you could always stoop to the level of more mortal investigators and simply spend an action to evade it and poof, it's gone.

gionazzo · 50
I couldn't agree more. This weakness is almost laughable at how easy it is to deal with. I expected the card to reshuffle into your deck after an evasion, thereby forcing Trish to step out of her comfort zone and do some fighting. Maybe they didn't want that because they don't want you using Shadow Agents to trigger her response repeatedly (and therefore being a help than a hindrance). But I feel like the high evade value would tempt Trish into trying to use them to her advantage only to be sabotages from a bad draw. — LaRoix · 172 10/5/20
It is still 5 to evade, which is a lot even for Trish, so without a way to investigate skipping AoO you might have to suck it up and take two damage. If that investigate fails too, then you might be in trouble. I think this ironically hurts a bit more in multiplayer where you're not as concerned otherwise with AoOs, but I think even there you'll at least have Narrow Escape. So overall, not a nothing weakness, but definitely tame relative to Trish's power level. — StyxTBeuford · 2320 10/5/20
At worst, two damage. Oh well. — MrGoldbee · 197 10/6/20
Play Decoy and they're outta here. — toastsushi · 62 10/6/20
Well no, at worst you fail the investigate and you have to take 4 at least. That can happen, don't discount it. That said, in multi you probably are taking good tech cards like Decoy, so you have that as an answer (and your friends can help kill it also). — StyxTBeuford · 2320 10/6/20
I've had someone else engage it at her location (Nate with Get Over Here), and he fought his entire turn. Then Trish just investigates to get rid of it. Additionally, you have Slip Away which puts you at 8 to try to rid of it. There's many options. — toastsushi · 62 10/6/20
Absolutely, there are several ways. Just be aware it's the kind of thing you do have to make sure you're ready for. If there's no clue on your location, or if the shroud is high, or if you don't have that evasion tech, you could be in big trouble. Even evading at 8 with Slip Away isn't guaranteed. Don't make the mistake that you can Hunch or Lola your way out of it, since you can't get clues except through investigating. — StyxTBeuford · 2320 10/6/20
In my brief TTS trial of Trish, I ended up getting kind of screwed over by this because I drew it late after all the clues were gone, 5 being a pretty tough number to evade with 0xp. Later I got Obol'd, so it was probably not a great deck, anyway, but point being if your counters aren't in hand, and you've already discovered all the clues it's pretty rough! One nice thing about Quick Study or Maleson. — Zinjanthropus · 94 10/7/20
2

Fastest ways to deal with this (assuming you don't want to test versus 5 or spend ammo):