Your investigator's Deckbuilding Options gain: "one other level 0 card from any class (, , , , or )." 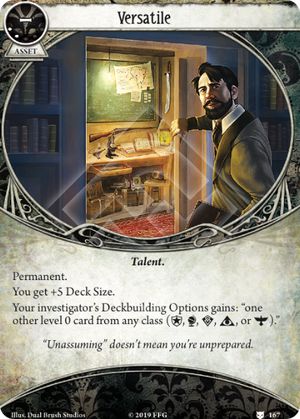 Versatile offers every investigator the ability to buy any one level 0 card at the substantial cost of 2 experience and an increase in deck size. I actually think the +5 Deck Size is the greater cost associated with Versatile than the experience because its going to make it harder to find and draw your key assets - weapons to fight with, tools to gather clues with, etc. - not to mention also making it harder to find that special out of faction card you bought Versatile to play in the first place! I don't think its worth buying Versatile without an exceptionally good reason; the out of faction card you buy better offer you something especially powerful for your investigator. There are a hanful of investigators that get something really unique from Versatile or else who I believe are in the best position to take advantage of it:

Wendy Adams - Wendy gains access to Premonition, which combined with her amulet truly breaks Arkham Horror. The Forced ability on Wendy's Amulet is presently ruled to not apply to events that don't go immediately to the discard pile after being played. This means that, with Wendy's Amulet in play, you can play Premonition over and over again at the player window at the start of every skill test and always know exactly which token will be drawn. To dig to find this combo, Wendy has access to Rabbit's Foot, Drawing Thin, and Nothing Left to Lose, among other cards. You still won't reliably find your exact two cards in 35, and the experience cost of the best Survivor draw makes this combo likely a late campaign option at best. Personally, I think infinite Premonitions will spoil the major challenge of Arkham Horror - in having to guess which skill checks are worth your resources, and sometimes being screwed by bad luck you couldn't foresee.

Mandy Thompson - Mandy is a special case on this list. Her sheer power of deck searching means she cares far less about her deck being a bit on the large side. If you are playing Mandy with a base 30 Deck Size and all the generic deck searching cards that are so strong for her - Mr. "Rook", Eureka!, etc. - then you likely will find the card you bought Versatile for in most scenarios. The question remains as to what you should buy. Given Mandy's insane searching I don't think you need as powerful a combo as other investigators considering Versatile, but I'd suggest a powerful out of faction asset to make up for the fact she only gets events and skills in her "off-class".

William Yorick - being allowed to replay assets means that any you buy will get value for as many times as you can afford to play them. In addition to that though, Occult Lexicon offers Yorick a truly fantastic ability with Blood-Rite. Blood-Rite lets you discard assets you'd rather play actionlessly from your discard pile in exchange for the two things Yorick wants most of all: resources and damage. On top of that, Yorick's card pool contains a broad variety of powerful weapons all of which he's happy to play - Enchanted Blade, Baseball Bat, Meat Cleaver, etc. - so you can keep the desity of weapons in your deck high even if you add 5 more cards. In addition to the powerful Survivor draw available to Wendy, Yorick can use Yaotl to mill his own deck to dig for assets.

Calvin Wright - Calvin uniquely benefits from having his health and sanity pools extended because it means his stats cap out at higher values. The number of cards in the game that presently do that is exactly two: Five of Pentacles and Hawk-Eye Folding Camera. Five of Pentacles is already a Calvin staple. Is the camera worth it for 2xp and +5 Deck Size? The willpower and intellect boosts are also nice to double down on deepening his sanity pool. I'm not certain this is worth it, however. Both Five of Pentacles and the camera demand that you mulligan for them because they are far stronger than in your opening hand than drawn later in the scenario, and all the card draw and deck searching in the world won't help you mulligan your thick 35 card deck. If you want to give Calvin a camera, you might be better gifting it to him by the use of Teamwork.

I think these examples show well enough when Versatile is likely to be good. It's not really worth it if all you are doing is buying some generic value card from out of faction, it really has to be a card with a unique effect that is particularly powerful with your investigator that you wouldn't be able to substitute with in-faction cards, and even better if you have access to plenty of card draw to dig through your bloated deck to find your cards.

aeongate · 29
I quite like the idea of giving Calvin Dynamite Blast and turning him into a suicide bomber. It may not really be worth it for all the reasons you already set out about the drawbacks of having a larger deck, but it would be hella fun and if you do manage to draw it early it's an instant +3 boost to fight and evade. s — Sassenach · 60 1/21/20
2

So, now every investigator is able to blur the lines regarding classes not just those came with Dunwich Legacy, but there is a catch: The card has an experience cost attached to it so in campaign play you have to buy it later, you cannot start with it. The issue with that is, it also increases your deck size by +5 and deckbuilding rules have to be obeyed at any given time. Now, as far as I do understand it, this means you not only buy Versatile for 2 XP, but you have to immediately buy 5 level 0 cards for 5 xp as well ("Each card costs experience equal to the card's level, to a minimum of 1 (purchasing a level zero card still costs 1 experience). The number of pips beneath a card's cost indicates the card's level.") There seem to be no kind of "auto fill" like with cards lost due to exile.

So if I am right here, versatile increases your deck size, you have to spent all XP to fulfill the +5 deck size at once. I wonder, if am overlooking something currently, because evidently it would require hoarding XP and careful planning what seems to be a bit overdone just for a single level 0 card of any class.

thakaris · 22
Maybe applies Exlie rules from Dunwich: — Dark Oracle · 11 12/18/19
No way. I'm sure it will be considered similar to exile cards: " you must purchase cards so that a legal deck size is maintained (when purchasing cards in this manner, you may purchase level 0 cards for 0 experience cost until a legal deck size is reached)". But it needs confirmation, indeed. — Okami · 21 12/18/19
You are right, it should work like exile, but exile rules only apply to - well - exile. This is not the case here so as far as I do understand it, it won't apply in this case. — thakaris · 22 12/18/19
For now I'd play it like Exile, but you're right, rules as written you wouldn't be allowed to buy Versatile unless you have 7 XP to spare. — StyxTBeuford · 751 12/19/19
Cards with Myriad will allow you to add up to three cards, for the price of one. — Csys · 1 12/19/19
This issue is technically ancient, but has never properly gotten included in the FAQ. Blood on the Altar resolution can bring you below the deckbuilding requirement without explicitly allowing you to purchase replacement cards without spending xp (i think this was informally answered outside of the FAQ however) — Difrakt · 666 12/19/19
Father Mateo overrides this issue ;) — Balin · 27 12/20/19
Rules are very clear, you cannot be below deck size. So you can purchase Level 0 cards for 0xp each untill you reach correct deck size. — VARRAKK · 1 1/7/20
If you receive 2 exp from scenario and that is your only exp, when you buy this you are on 0. BUT you must make a legal that so there is no other way but to fill up the slots with 0 level cards. I don't see any other logical reason. The question however arises if you have some 4 or more exp at this time.. can you spend 1 exp on a 1 exp card and then fill out the rest with 0? I think you can. I don't however think you can decide to not spend any excess cards and still fill out the slots with 0 level for 0 exp. — ReiNijs · 1 1/7/20
I have asked Matthew Newman this question, and that is what he came up with, this seems to be very interesting: We’ll be adding this to the next iteration of the FAQ, but the rule about repurchasing cards when you exile a card and must purchase a new card to maintain your deck size applies here, as well. Essentially, anytime a card effect causes your deck size to be under your investigator’s required deck size, you may purchase new level 0 cards at 0 experience cost to make up for this. This includes both effects that remove cards from your deck (such as when you exile a card), and also effects that increase your deck size. — thakaris · 22 1/12/20
Preston Fairmont, meet Charles Ross. You'll get along brilliantly. — Wasindear · 1 2/24/20