Jessica Hyde enters play with 2 damage on her.

After your turn ends: Heal 1 damage from Jessica Hyde.

I warned you to stay away from me. Now we're both in this together.
Andreia Ugrai
The Search for Kadath #118. 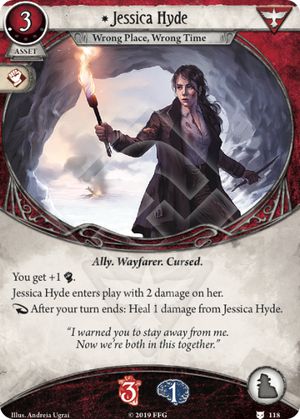 This card seems made for Tommy Muldoon:

Poor girl. Seems like she’ll be sacrificed by Tommy a lot. At least empirically in my game, Tommy (played by my partner) has sacrificed more people than all the “bad guys” combined...

krzhang · 6
She seems tailor-made for Calvin to me. Static boost to combat plus the ability to regulate damage for the rest of the game once she hits the table ? That's very powerful. Team her up with Peter Sylvestre and he becomes almost invulnerable. — Sassenach · 168 11/22/19
I think Calvin and Yorick like her best. Calvin with Jessica + Sylvestre is ridiculously strong. Yorick would love to play 4 Beat Cops if he could, but Jessica is a close second. — StyxTBeuford · 12744 11/22/19
I think those combos are good too. I do like my reason (5) though, if we are trying to read the minds of the designers =D — krzhang · 6 11/23/19
The stat's good for Tommy, but I don't think she's actually a great option for Tommy. Tommy wants to have allies that he constantly cycles through, so he can recoup the resource cost after getting some benefit. Jessica, on the hand, is someone that's meant to say out, using the constant Health regen for staying power. I think Tommy would prefer the guardian suffer-for-benefit cards (Beat Cop (2), Guard Dog, Brother Xavier, Grete Wagner, and Agency Backup). — Ruduen · 825 6/13/21
3

Who would use this?

I think Ashcan Pete and Calvin Wright are the most likely to use it.

jmmeye3 · 595
What about a Upgrade for Beat Cop? (Wiliam Yorick) — Lord Triloth · 1711 9/8/19
I think Beat Cop II is probably better for Yorick. Beat Cop II's ability is spectacular and has great synergy with Yorick, since he can recur it. Yorick definitely doesn't need the health from Jessica, either, as he can recycle Leather Coat and the like. — CaiusDrewart · 2816 9/10/19
That said, this is a great card and Pete is going to love it. — CaiusDrewart · 2816 9/10/19
Have Tommy Muldoon take her along with Peter (with Charisma) to enable god mode — Jermz238 · 1 9/17/19
I think it'll be great as a post Timeworn brand upgrade for Yorick, 2 Timworn brands + 2 beat cop(2) + charisma + 2 Jessica = 19 Xp, a very reasonable way to spend your XP from the first 2-4 scenarios — Tsuruki23 · 2350 9/18/19
@Jermz238 Tommy doesn't want his allies to heal, he wants them to die — neescher · 254 11/12/19
In The Forgotten Age, I would give it serious consideration in any Investigator that can take it. — Katsue · 9 12/28/19
Might be a half way decent ally for Meat Cleaver Agnes to take along with Charisma (Peter is probably more important without Charisma, though) — Zinjanthropus · 213 2/25/20
Agreed that while Lola can take this it is a bad fit. Lola has to end her turn as a survivor to get the heal in. Making Jessica a poor damage soak for her. Which means she is primarily a +1 fight, beat cop has passive rather than active soak, but costs one more. If upgrading cards to get the ally, Delilah costs the same amount of resources, has more soak and a +1 speed as well. Jessica is playable in a Lola deck, but, a low tier ally for her. — dkilkay · 1 5/8/22
3

Good card. Boosts and solves Health as a potential problem.

Silas Marsh, Rita Young, Tommy Muldoon and William Yorick can all put it to worthwhile use simply for the +, although some of those can fit Beat Cop which may be significantly more useful to them.

Jessica Hyde's only problem is, other good cards! Grab Charisma and field them together! Jessica Hyde + Peter Sylvestre is a brilliant combo to enable a variety of folks to tackle threats for a veritable eternity, Jessica Hyde+Beat Cop for obvious reasons.

Tsuruki23 · 2350
Other than the fight boost, I think Tommy has better options to cycle through his friends. However, he might want her for the same reason Agnes will take Sylvester: sometimes you want to take damage, but there's a little too much damage. It's a shame Mark can't take her. — SGPrometheus · 688 3/26/20
But Mark CAN take Teamwork. — Death by Chocolate · 1251 3/26/20
2

Looking to the future, at some point we should be getting Vincent Lee. If he can take Survivor level 1 cards, and his ability does something good when healing - which I assume it will - then this could be a pretty big card for him. If he can’t take survivor cards, I suppose there’s always Teamwork!

ksym77 · 88
That or similar to Carolyn he might be able to take any cards that "heal damage" which gives him Jessica access anyway. But yeah, much like Peter Sylvestre for Carolyn I can imagine Jessica being a good choice for him. — StyxTBeuford · 12744 12/8/19
Now that we've seen Vincent, Jessica is even better for him than Peter is for Carolyn. The Strength boost is more helpful for him, than the Agility is for Carolyn, and her starting damage gives Vincent two free On the Mends. She looks like a great card for him! — Jaysaber · 7 9/11/22