A grisly future is laid before you.
Do you turn away? Or do you embrace it?
Ilich Henriquez
The Search for Kadath #117. 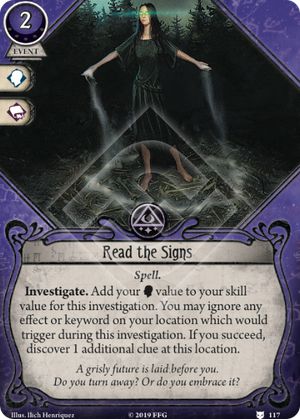 This card joins the ranks of a growing list of events that grab 1-2 clues. I think Read the Signs is not the best of these, but also not the worst. In general, events like this get one clue for 2 resources and a card (Working a Hunch or 2 clues for 2 resources, a card and an action (Scene of the Crime, for example). Some cost less but have limitations (Eavesdrop) or drawbacks (Drawn to the Flame). Most require skill checks but a few are test-less (Working a Hunch and Scene of the Crime.

Good things about Read the Signs include lack of limitations, special requirements or punishments, and a bonus that is better than all the other similar events that require skill checks. The ability to ignore a location effect is probably pretty limited (only works on keywords effects triggered during the investigation), but of note “ignore” triggers Diana Stanley’s power. However, overall Read the Signs is probably second only to Working a Hunch in terms of flexibility, and so is less likely to be a dead card sitting in your hand compared to many of the other similar events.

The main consideration when deciding whether to include a card like Read the Signs is that its effect should provide a major advantage over a regular investigate action. So it is less valuable with strong investigators like Daisy Walker and Norman Withers. Diana Stanley is a special case because it could activate her power. Sefina Rousseau loves it, as pointed out by others, since she needs events and since she would rather avoid possible enemies coming from Drawn to the Flame, so I think Read the Signs either joins DtoF or replaces it for Sefina. Many other mystics would at least consider this card, since they tend to have 3 or less intellect.

What exactly does it mean "which would trigger during the investigation"? Things like Haunted are included? Location effects like "When you discover the last clues at this location: ..." ? Does this card automatically make blank the text on a location?

Haven't had a chance to play this yet, but at first glance it seems like a prime taboo candidate. The minimum that any investigator who can take it would be investigating at would be 6, but that's really only the off-class or splash card people and it assumes no boosts to either will or int are in play. For most players you're going to be able to get up to 9 or 10 very easily when using this card, which is enough to smash almost any shroud level in the game. As such it effectively amounts to "pay 2 resources to discover 2 clues while ignoring all triggered effects". It compares very favourably to Intel Report in that respect and is arguably superior to Drawn to the Flame since it doesn't require the drawing of an encounter card. Granted, this is not testless and can still fail, but I'd suggest that in most cases failure is very unlikely and the consequences for failure are not very severe. I'm surprised that this is available at level zero, or that they didn't make it cost a little more.

Sassenach · 134
Taboo worthy already? That seems premature given that it's a two cost event that does nothing if you fail a skill test. This is in the same camp as cards like Lockpicks or Suggestion, and I don't see those getting taboo'd any time soon (sure they cost 1 XP, but they're also assets and therefore repeatable). Drawn to the Flame gets you two clues basically guaranteed for no resources and typically minimal cost since most people who play Drawn can usually deal very easily with whatever it is they draw. Diana in particular even desires it for an extra cancel target. — StyxTBeuford · 11737 11/22/19
I see your point, but at the same time lockpicks is 3 actions and 3 resources (and 1xp) to net you 2 clues. This is 1 action and 2 resources to achieve the same effect, albeit non-repeatable. But really, the reason I think it may be tabood at some point is that it seems like an auto-include in any mystic deck and probably also in several others (Norman/Daisy, arguably also Sefina) — Sassenach · 134 11/22/19
I have played it, not a great card. — danielmaciel · 8 11/23/19
I disagree that it’s in any way an autoinclude for those guys. In solo you would almost never take this. In multi Seeker are better off just actually investigating and spending cards/resources buffing that instead of relying on one shot effects. I like this card for Sefina and any Mystic that wants more action compression investigates like DTTF, but I really do not see this as an autoinclude. Even Drawn to the Flame isn’t taboo’d, and I think that card is stronger than this one. — StyxTBeuford · 11737 11/23/19
#Stynx: This card could trigger Diana’s ability if it ignores a triggered ability. Not sure how often that happens, but you could easily plan it out so I give the edge to this over Drawn to the Flame for Diana. — jmmeye3 · 502 11/24/19
This card is good for mystics that want to focus investigation and I am happy it is out because I want to do pure cluever mystic builds. Besides that I don't think this is an autoinclude (especially in multiplayer). If you plan to build a combat focused mystic you don't necessarily need this. Seekers with acces to mystic tend to have 5 intellect so paying 2 ressources for an extra clue is not that great, I would only use this with Daisy if I am playing on Expert difficulty and the boost can come in handy at the start of a campaign. — Alogon · 588 11/24/19
Lockpicks is a terrible comparison at two clues. It’s an asset and can continue to gain you clues at high reliability beyond that. Read the Signs is an Event - yes it gets you reliable action progression, but it does so once (twice if you draw both {maybe more with specific recursion tricks}), but you still need a way to get the rest of the scenario’s clues. And many Mystic builds are still strapped for spending 2 resources on a card like this. I think it has its place in a lot of builds, but more than it replaces Drawn to the Flame, I think it augments it with the new ability to run four mystic Investigation events for throughout and reliability. — Death by Chocolate · 581 11/24/19
Right, my point was a card like Lockpicks is usually better because it does something similar except it does so all scenario long, while this is a one shot effect. If the former doesn't get taboo'd, I really don't see this one getting taboo'd. And yes I recognize this also could trigger Diana's ability, but that doesn't seem particularly reliable outside of some very specific scenarios. I agree that I mostly see this card being run alongside DTTF for clue compression in some Mystics and in particular with Sefina. — StyxTBeuford · 11737 11/24/19
#jmmeye3 exacltly. It is just 1 cost 2 clues grab card with +1 to sanity and drow card for Diana. Great in card for this synergy. — Bany · 14 1/4/20
I've been playing with this in my Sefina deck and it's worked pretty well. It also works well if you can attach it to Desperanza (sp?). There needs to be a way to get more than one use out of it to be its best. — Phelpsb83 · 29 1/27/20
I also thinks it's best in low-player count where 2 clues might actually clear a location. A whole card, action, and 2 resources to take 2/8 clues off of a location doesn't really do it for me, since you probably have a Seeker that does it way better. I also wonder if there is an upgrade to this (and, perhaps, spectral razor) coming in this cycle? — Phelpsb83 · 29 1/27/20
Not true. There are people who can take it that start with a 4 for the skill test on this. — Tilted Libra · 11 6/7/20