Commit only to a skill test (of any type) being performed by another investigator at your location. 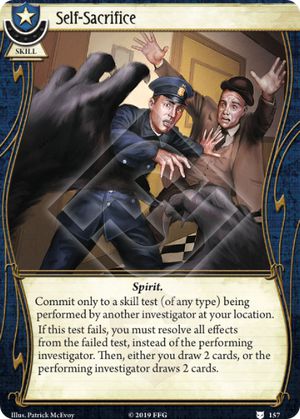 As mitigations for failure go, Self-Sacrifice doesn't quite stand up to Survivor staples such as Take Heart. Take Heart grants a failing investiagtor two resources as well as two cards and can be committed to your own skill tests, so it has great synergy with the Survivor card pool in general.

Self-Sacrifice's specialty comes from allowing you to pass around the consequences for skill test failure. Many punishments for failure include taking damage and/or horror, and I know I've lost a handful of scenarios due to one player drawing and subsequently failing every Rotting Remains in the deck, while another sat pretty with a pristine sanity pool! Self-Sacrifice may allow you to avoid that case in a way that Take Heart won't while providing at least a portion of the older card's tempo acceleration. You can even choose to take the extra draw yourself, which might be good for catching up if you just tanked a chunk of horror due to an auto-fail.

Notably, Self-Sacrifice might also let you tank a Retaliate or Alert attack trigged by a failed test, which may well be relevant if you're packing some of the Guardian cards that reward you for taking attacks, particularly those spoiled for the Nathaniel Cho starter deck (Counterpunch, Lesson Learned, etc.). Weirdly though, this demands that you play someone with a Guardian card pool while your teammate attempts to fight or evade a monster, rather than you taking that action, which doesn't come up often in a typical two player Guardian monster hunter plus Seeker clue gatherer pair.

Clearly this isn't a card for every investigator. Roland Banks tends to be the very investigator suffering from one too many Rotting Remains with his paltry 5 sanity, and the same could be said for "Skids" O'Toole and Tony Morgan with their pitiful willpower. Investigators with larger sanity pools and higher willpower are more likely to appreciate Self-Sacrifice's ability to divert punishment for failure to themselves. I think one key investigator who will appreciate this is Carolyn Fern who is happy to tank horror all day, as its easier to heal on herself than on teammates, and she has an adequate health pool too. Diana Stanley can really ratchet up protecting her teammates with this as well, and she might be able to cancel a consequence for failure with Deny Existence when it's applied to her rather than a teammate.

Interestingly, there are a handful of investigators who have both Take Heart and Self-Sacrifice as part of their card pool. At time of writing they are William Yorick, Lola Hayes, Calvin Wright, and Tommy Muldoon. As per my brief analysis earlier, I think Take Heart is generally the stronger of the two cards because granting extra resources is more straightforward to take advantage of than moving consequences for failure, but some of these investigators might consider Self-Sacrifice in addition to Take Heart. Yorick, Calvin, and Tommy can all benefit from tanking extra damage or horror on their cards: Yorick and Tommy can both replay soak assets and Calvin can boost his stats. Lola is of course a toss-up because of her bizarre deckbuilding restrictions, but I think even if you are playing Guardian as one of your roles, you're too fragile to really consider Self-Sacrifice.

In short, any investigator who is reasonably durable and doesn't mind tanking some treachy failures, damage, and horror ought to consider Self-Sacrifice to protect more vulnerable teammates. The tempo reward of drawing cards actionlessly is a nice bonus for a faction without much reliable and repeatable card draw. It's no staple, but it is a solid card.