You may take an additional action during your turn, which can only be used to engage or fight an enemy with 1 or more bounties on it.

"When I find that beast, I'll put it down for good."
Tony Foti
The Dream-Eaters #3. 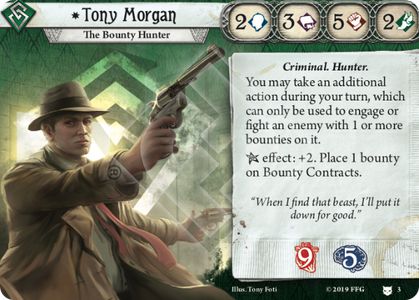 Tony's tracked down low-life scum in every lousy corner of the world, but nothing could have prepared him for the thing he killed in Innsmouth. It had the form of a man, more or less, but it was covered in loathsome scales and slime, like some horrid creature of the deep. It stank of salt water, rotten fish, and blood. He should've let it go when it dove into the river, but he'd never let a bounty escape before, and he wasn't about to start then. Ever since, he's found a new kind of dirtbag to hunt. Ordinary mobster or otherworldly monster, Tony will take it down... if someone is willing to pay him for it. 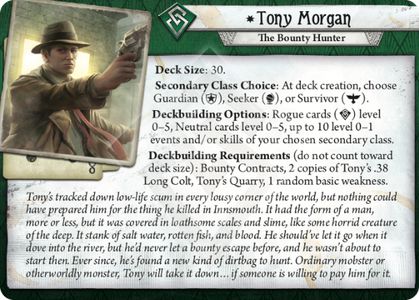 __Deck Building
Search for cards usable by this investigator
Reviews
12

A JOB'S A JOB: BOUNTIES

How do you get more bounties after using them?

Combat: Getting Tony to Base 7

Without Teamwork or "You Owe Me One", Tony cannot reach a base of 7 like a typical Guardian can with Charisma, 2x Beat Cop, and Ace of Swords. Note that if you plan on playing "You Owe Me One" to pluck a Beat Cop or Tarot from a , you can return it with Teamwork, but if you did that then what kind of Rogue would you be really?

Getting Tony to 6/7 seems to be most consistent using Tony's .38 Long Colts for 6 fight actions by fighting an enemy with 1 bounty on them with Long Colts. Gaining that bounty back when that enemy is defeated with his Long Colts is also beneficial if you can add to your ammo with Contrabands, or Extra Ammunition.

Tony’s other increasing options are hired goons, and a handful of talents. The best option, however, is that Rogue staple: resources.

apotropaic · 23
„Well Connected“ is „Limit 1 per investigator.“ If you don‘t have an effect to ready the card, you can only use it once a turn. — Astrophil · 1 7/28/19
Wow, I completely missed that. Thanks for the correction. It definitely makes a difference, but having one in play is still extremely helpful with treacheries. — apotropaic · 23 7/30/19
Unfortunately DoN doesn’t help either his elder sign or guns add bounties. DoN only doubles ‘effects of a successful test’. His elder sign is success independent, triggering when the token is drawn and not caring whether the test is successful. The guns are as well, the extra bounty clause says it happens ‘if the attack defeats an enemy’ - technically not an effect of the test being successful. — Death by Chocolate · 13 9/30/19
That's correct, about DoN. And now it's 3XP. Anyhow High Roller is an obvious replacement for a second Well Connected. Thanks for the correction, Chocolate. — apotropaic · 23 10/5/19
How does he got a Mystic card? — AquaDrehz · 112 10/8/19
6

Tony Morgan is a very exciting Rogue. Not a single Rogue until now has has a higher than 3, which is strange when you consider than the class has had combat support since the core set (.41 Derringer, Hard Knocks). Before Tony, the most consistent way to build a combat Rogue was to take either "Skids" O'Toole or Jenny Barnes, upgrading into Chicago Typewriter and investing tons of resources into actions for the Typewriter or directly into Hard Knocks. Even more interestingly, Tony is the first Rogue with a stat of 5 in anything. This means the "succeed by X" suite of cards (Lucky Cigarette Case, Switchblade, "Watch this!", Quick Thinking) can trigger way more consistently in his Fight tests. And as if that weren't enough, Tony's an action economy Rogue. He gets a bonus action for fighting or engaging an enemy with a Bounty on it, which if you're conservative with your bounties will not be hard to keep up all game. Not only does that directly help with Chicago Typewriter, but it gives him the opportunity to run Colt Vest Pocket or Lupara even without holding Sleight of Hand all the time.

All of this is to say that Tony's suite of Rogue cards is fairly unique compared to his friends. There's a few Rogue staples that still work well with him, but you're not trying to turn your into damage. No Backstab, no Sneak Attack, no Ornate Bow, you get the idea. He might not be as versatile stat/test wise as Mark Harrigan, the other 5 investigator, but if you build him right, he can take incredibly long turns, fight really well, and get massively paid doing it. So with that, let me draw your attention to a few cards worth considering when building any version of Tony:

As a caveat here, I don't personally recommend Knuckleduster. It offers 0 boost and the consequences for failure are quite high. Extra damage, as I said above, is not as valuable for Tony since he's fine spamming actions with his melee weapon until the monster dies. You simply can't do that with Knuckleduster without heavily paying for it in health or sanity, and there may be worse consequences than even horror in certain campaigns.

Phew! That's a lot to go through. But wait, there's more! Tony gets to pick between Guardian , Seeker , or Survivor as an off class, from which he can take up to 10 level 0-1 Skills or Events. The temptation of course is to go straight to Guardian and maximize his combat potential. The trick however is to understand that he's a fairly capable fighter even just as a pure Rogue. What you really want from this suite of cards is defense and versatility. Again, let's go through a few cards for each subclass that I think are worth looking at (note any double icon card also benefits well from Crystallizer of Dreams:

With so many choices, the hardest thing about Tony is pinning down a direction. If you're playing in a group, it'll be easier as you'll just take the path most open to you. One final tip: bring some way to track your remaining actions. You will very easily lose track otherwise.

StyxTBeuford · 747
We finally get a Rogue who can viably run knuckle duster and no mention of it? I take it over switchblade easily as I’d much rather risk retaliate at his native 5 than use switchblade to functionally swing at 3 for the bonus damage. And I’m still fine with the knuckles taking a chill to spare my guns. — Death by Chocolate · 13 10/1/19
Knuckleduster is solid also, probably a stronger choice than Switchblade on higher difficulties. Thompson is also a solid choice, especially with Act of Desperation. I had to narrow in on a few options. — StyxTBeuford · 747 10/1/19
I was considering doing an analysis of Tony but this review hits all the key points. I really think that seeker Tony is the best build by quite a margin, between that and some Lola Santiago / The Skeleton Key and he can be useful in any scenario under any conditions. You should mention Drawing Thin in the survivor pool because its the best red card in the game and has synergy with Well Connected and Streetwise; plus you'd want Resourceful to fish back your skill redo cards. Even with the possibly of the Chicago Typwriter I still think that he is yet another investigator who just rushes straight for Timeworn Brand as his first upgrade. — The_Wall · 116 10/2/19
Ah yes I’ll update and mention Drawing Thin, you’re absolutely right. I forgot about it because of the recent taboo, but I should still call it out. Timeworn is also a great Tony upgrade, you’re right. — StyxTBeuford · 747 10/3/19
Please don’t update to mention Drawing Thin. It’s an asset. — Death by Chocolate · 13 10/3/19
Jeez, yes you are right. This is why I shouldn't react to comments right as I wake up. — StyxTBeuford · 747 10/3/19
I'm not expecting it to be an optimal build or anything, but I'm really excited to use the upgraded .41 Derringer with this guy. That is a pretty cool card that has been waiting a really long time for a suitable investigator. — CaiusDrewart · 1593 10/3/19
It's a fun time. Borrowed Time, Quick Thinking, Ace in the Hole, Leo de Luca, Derringer, and then Pay Day just because. You'll never have to worry about chasing your Quarry again! — StyxTBeuford · 747 10/4/19
Yeah. As others have said don't knock Knuckleduster. IMO it's the #1 companion weapon to his own guns when you have no xp. His default fight value is so high that the retaliate represents fairly minimal risk. And you can use it to take care of or soften up pesky enemies before finishing them off with his own gun. And the ones really tough he can load up with bounties to take care of. — puert · 32 1/5/20