Another Day, Another Dollar

You begin each game with 2 additional resources. 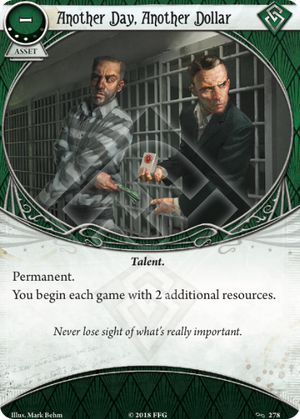 I think the other review of this card is a little harsh. While it is true that Hot Streak and its ilk do gain you more total resources, the main advantage of this card is that it is always active from the get-go, and doesn't have to be drawn or played. Using Versatile to grab an Astounding Revelation with Stick to the Plan is a tried and true combo (on Guardians not named Roland, Carolyn or Zoe) despite the drawbacks of extra deck size precisely because of the initial boost (in a class that is much more starved of resources, to be fair). But having 7-9 resources to start shouldn't be slept on, it gets assets down faster, or provides a bigger starting base for core pieces of certain "pay-to-win" combos, most notably Lola Santiago and Delilah O'Rourke. Sometimes you will be in tight situations where spending actions for big resource gains is simply not feasible. The fact they're permanent and don't take a deck slot is also nice, as it means your deck potentially has more space to support your combo, than needing to contribute slots to resource generation for additional set up. Obviously these are always nice as a luxury late game upgrade, but I think they have a substantial amount to offer in the middle of a campaign if the conceit of your deck requires expensive pieces such as the aforementioned duo, Leo De Luca, or Double, Double (one copy of this card in particular is great for a doubled big money Sefina deck, as it allows you to play Double Double and Hot Streak from the get go). Don't sleep on ADAD, they don't look high impact, but they can really smooth over early game set up bumps.

sonicknight15 · 63
(Or named Carolyn) — Death by Chocolate · 1251 3/30/21
Is Versatile/Astounding/SttP that beneficial? I'd thought that the increase tempo from resources was not worth the lower chance of seeing your big gun after the mulligan and the lower chance of Prepared for the Worst finding it. — suika · 8839 3/30/21
I have yet to try, if it's worth a Versatile for investigators that can't take it. But one thing, that's beautiful about the combo is, that you can get up to 10 resources cost worth of assets into play with "Ever Vigilant" into play turn 1. This makes it more likely to use that card to full value. Not saying, that ADAD is worth nothing, it is sure a reliable way to get a faster setup for rogues. But at 3 XP more, guardians get sure more value from SttP. It's normally at least 2 resources saved with EV, even without AR. Plus (if not paired with "Versatile"), it adds a lot of consistency. — Susumu · 271 3/30/21
3

This is a great way to gain money with experience, more efficient than spending experience to reduce the cost of cards. Usually when a card upgrade reduces resource cost, it will cost 1 XP to reduce the cost of a card by 1, but that only helps you if you draw the card, and only if you want to play the card at that time, and even if you do draw the card it may take you a long time to do so. With Another Day, while it costs 1.5 XP per resource, it gives you those resources always rather than sometimes, and it gives you them right at the start when you tend to need them most, rather than at some random later time that may be too late.

In general it is better to purchase this card than to upgrade your Emergency Caches into Hot Streaks. However, if you are really a glutton for money even at the cost of actions, and you need it throughout the mission rather than up front, you may be better off getting Hot Streak in addition to Emergency Cache, to bypass the limit of only two Emergency Cache in your deck. Hot Streak could also be better for certain specialty decks, like those which make special use of events, or fast drawing decks which are certain to run through the entire deck before the end of the mission.

Not much going on this card for review purposes.... Let me get it in then:

1) Tempo: you start the game quicker, effectively like an automatic Emergency Cache (no action to get 2 resources), rather than 1 action to get 3. Decks running expensive cards like Leo De Luca can play him straight out of the hand, without losing tempo by getting resources first.

2) Choices choices: It is permanent so doesn't take up a card slot, so you don't have to choose between sacrificing your favourite cards.

3) Investigator/campaign/scenario dependent: It could be an option if you choose to go through The Forgotten Age without getting many rations: you'll be less affected when you start a scenario with fewer resources. Could have a niche role to play in an expensive Lola Hayes deck.

Cons: In the Rogue deck there are generally much better options around, i can't think of many times i'd want to spend 3xp for this card over a Hot Streak or just saving up for Double, Double or The Gold Pocket Watch. Late in the game, most Rogue decks will have ways of getting resources.

Phoenixbadger · 180
This card does not cause Preston to "gain" resources, so they would just be in his pool to start. — pneuma08 · 26 7/6/20
Finn can't take the higher level rogue cards you mention, so maybe it'd have a niche for him to supplement Pickpocketing 2/Drawing Thin/w/e late in the day in an exp-rich campaign? Beyond that , it's consistent and predictable , I guess.... — bee123 · 24 7/6/20
I like this more than Hot Streak most of the time because the resources dont have to be “drawn” and help your initial set up. Right now this card’s really only outclasses imo by Easy Mark, which is just ridiculously good tempo. — StyxTBeuford · 12744 7/6/20
Drawing can also counted as an action, so another advantage over emergency cache. — Django · 4428 7/7/20
Any rogue who intends to hard mulligan for Leo de Luca will want this card. Getting Leo out on turn one without needing to draw resources affects your tempo for the entire game. — Time4Tiddy · 213 1/10/21
Well you could also spend 2 XP instead of 3 XP to get 2 Level 1 Leo de Luca if playing it straight on turn 1 is all you want. — Killbray · 6186 1/31/21