When a phase begins, remove The Gold Pocket Watch from the game: Skip this phase.

After a phase ends, remove The Gold Pocket Watch from the game: Repeat that phase. 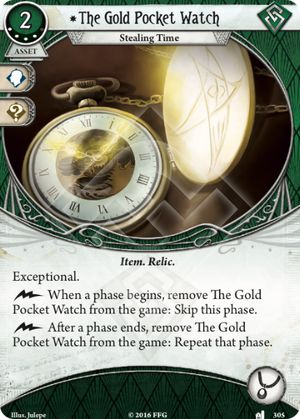 The Gold Pocket Watch is amazing, and you're probably not playing it as much as you should.

I think there is a common misconception about the Watch that it is either (a) too expensive - (i'll come back to this) - or (b) a combo card, that needs to be used with things like The Red-Gloved Man, A Chance Encounter, (the newish) Colt Vest Pocket, or anything else that lasts "all round", so you can squeeze 1 round's worth of effects into 2. While it certainly does work well in all these scenarios, it really doesn't need it to be effective, not at all.

Let's briefly look at its effects as they can be a bit confusing. Effect 1 basically says "skip the Mythos phase". This means no doom, no drawing of encounter cards, go straight to player actions. Probably 80% of the time you use the Watch, this is the best play. Effect 2 basically says "replay the Investigation phase". This is similar to skipping the Mythos, but you won't get a repeat of the Enemy and Upkeep phases. In both scenarios you are essentially taking "two rounds in one", with 2 sets of Investigator actions before the scenario can respond with doom and cards. The first effect also rewards you 2 Upkeep phases, so that's an additional resource and card for all investigators, at the cost of an additional Enemy phase. With no enemies in play, this a no-brainer - take the free stuff. Even with 1 or 2 enemies in play, the additional actions to evade or additional damage might be worth the additional Upkeep phase which brings cards and resources for all, which means that Effect 1 is still worth considering. Effect 2 sacrifices the additional Upkeep, but at the benefit of freezing the enemies, and also enabling the "until the end of the round" combo cards we talked about (which don't work with Effect 1, except The Red-Gloved Man as noted). Note that in both cases effects that last until "the end of the turn" (like Will to Survive) will never repeat. Individual investigator turns will always end, they just get a second turn.

At this point you're probably thinking of lots of interesting scenarios where having two sets of actions will be helpful and wondering how often they come up. Here's the thing - it doesn't matter. You don't need to wait for the ideal opportunity. The Watch doesn't need to be like the Phial of Galadriel, saving our heroes in their hour of darkness. You can just simply play it, pop it, and profit. The pocket watch brings so much additional resources to the table in any scenario that simply using it will be rewarding and amazing.

Lets do the Maths.... Assuming Effect 1 (repeat of Investigator phase and Upkeep). In all player counts, the watch costs 1 action, 1 card and 2 resources to play. What do we get back?:

Just look at those 3 and 4 player stat lines! On 4 players, what other card provides 16 units of profit, immediately (or on any future turn you like)? (Imagine if the watch was free to play, and said "gain 12 actions, 4 cards and 2 resources.". That's pretty much what it's doing in 4-player). And this is just a vanilla pop-and-play, not even considering the opportunity to be heroic, to break the back of bad draws, handle action-compression spots, or do any of the combo-nonsense we mentioned earlier. Only in solo is the Watch a bad play - even on 2 player, its an excellent provider of economy, and at 3 and 4 player, almost unparalleled.

So where does that leave us - with the downsides? Well, aside from the accessory slot, there really is only 1 and that's the fact its 8 XP into a single card. There are two problems with this. The first is saving up for it can put us at a power disadvantage, and most Rogues are probably still going to want Lockpicks and Streetwise first to get their deck rolling. But beyond that 5 XP, there are few cards that will make as much of an impact when they land as the Watch, so even if its not our immediate purchase after Lockpicks, we should certainly consider it soon. (In standalone, where saving-up is not a problem, the Watch should almost always be deployed). The second problem is finding the thing - with 8 XP on one card, its a high variance item. If you draw 2/3 of your deck, you won't see it every 3rd scenario. Ursula Downs (a great lover of the Watch) can get round this with various Seeker tricks (like No Stone Unturned, Cryptic Research Eureka! etc). Rogues have fewer options, eg Backpack, Pickpocketing, Lucky Cigarette Case (also an accessory), but you may not want to build your deck around it, and my central point about the Watch is - you don't need to.. It's not a combo card. Really, its not. It's just a dynamite of power, easily worth 8 XP, squashed onto one card. Buy it, hope you draw it, and go Tick-Tick-Boom!

duke_loves_biscuits · 639
I laboriously saved XP and finally bought the watch for Ursula in the 5th scenario of a Forgotten Age blind run. In the 6th scenario I found myself happily looking at No Stone Unturned. Yet, no matter how furiously I browsed my deck, I still could not find the damn watch! After the game ended, i found the watch lying on the floor under the game table, in its protective sleeve. I tell you, the thing is cursed by Azathoth! — mitsotakis666 · 1 11/4/18
I'm a bit confused -- how are you repeating both the investigation and the upkeep phase? — Phelpsb83 · 26 2/13/20
You skip the mythos phase instead of repeating investigation. That way you get 2 investigation and 2 upkeep between 2 mythos. But you also repeat enemy phase doing it like that so sometimes you're better just repeating investigation. — acken · 1 2/24/20
I'm curious, doesn't it just cost 4 XP to buy this card? Are you saying 8 XP because you need to buy both copies? — JImmothy · 1 4/29/20
It has the exceptional keyword, meaning that it costs double this printed XP cost. Therefore it is 8exp. The reason for this mechanic allows for cards to exceed the 5xp threshold and/or be permitted in investigators that have XP based restrictions. For example, an exceptional 2XP card will cost 4XP, but can be taken by investigators that can only take 0-2XP in that class. — Herringbone · 39 5/1/20