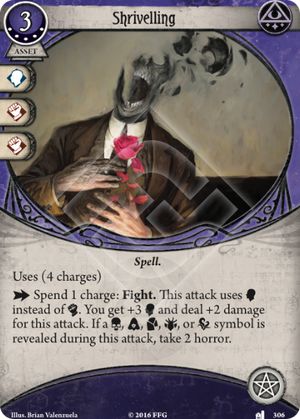 This is an exceptionally strong card. One of the most powerful and coveted upgrades in the game.

A repeatable source of 3-damage attacks is amazing. The number one way the developers make this game hard is by throwing lots of high-health health enemies at you. The number one way to lose is to draw more enemies in a short span than the team can deal with. A card that can repeatedly annihilate 3-health enemies in one action makes the game way easier. Being able to consistently crush the bigger stuff that comes out of the encounter deck in 2 actions is extremely useful, too.

Shrivelling V stands out as a particularly great purchase relative to the other superweapons in the game. Let's compare it to Lightning Gun (itself a very good card!). Shrivelling V is 3 resources cheaper, which is a huge deal, and has 33% more charges! It also has a far better slot situation as one arcane slot is a much smaller price to pay than two hand slots. Yes, you lose some to-hit bonus, but Shrivelling V's +3 bonus is still very good and will get results even on Expert. There is the horror penalty for Shrivelling V, which is harsh but has several workarounds (see below). All in all, I think the comparison is very favorable.

The 2 horror drawback is notable, one of the few "if you pull a special token" effects on a Mystic card that is harsh enough to make you sit up and take notice. But I find Shrivelling V well worth it. First, Mystics have naturally large sanity pools, and two excellent level 0 cards that can soak multiple horror. Mystics also have efficient in-faction horror healing if they want it. Second, since Mystics have really high Willpower, they take fewer horror from the encounter deck than anyone else. All this means that one sanity hit from Shrivelling V, or even two, is often not that a big deal.

Moreover, Mystics have an abundance of cards that cancel a bad token, let you redraw one, or let you draw two tokens and pick one (which drastically reduces your odds of triggering these effects.) You can combine any or all of these with Shrivelling V as the campaign goes on, which really neuters its drawback.

Note in particular how perfectly Grotesque Statue's 4 charges line up with Shrivelling V's 4 charges. I often aim to have both in my deck by the mid-to-late-campaign. If you get them both in play, you basically have 12 damage whenever you want it--damage that you can literally guarantee, even on Expert. Awesome.

To go back to the comparison with the game's other superweapons: compared to something like Lightning Gun or Shotgun, Shrivelling V is much more convenient. From a slot perspective and a resource perspective it's much easier to just pop it into your deck; you can easily still have the money and room to play other expensive and powerful stuff in addition. I'll repeat once more that 4 charges (that's 12 damage!) for 3 resources is just an amazing deal. It really is.

I end up buying this sooner or later (usually sooner) with pretty much every Mystic I play, and I really think it is one of the most important cards in the game for consistently winning at high levels.

Finally, the fact that Shrivelling V is a Spell is very helpful, given its powerful interactions with the likes of Arcane Initiate, Recharge, Uncage the Soul, and Arcane Research.