Choose a Spell or Relic asset controlled by an investigator at your location and reveal a random chaos token from the chaos bag. If you reveal a , , , , or symbol, discard the chosen asset. Otherwise, add 3 charges to the chosen asset. 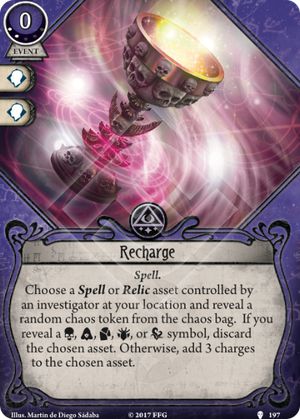 I think it's really interesting that most of the relics currently in the game don't use charges, the exception being Grotesque Statue. So with this card you could charges to a relic that doesn't use them, perhaps this could be an interesting way to subvert Akachi's weakness without wasting charges on a spell? Might be worth keeping an eye out for other interesting interactions in the future.

N146 · 41
The rules section about cards with Uses (X "type") says that you can't add Uses of the wrong type. So i don't think you can use "recharge" this way. I also don't think you'll need this, as in an all mystic deck, akachi should have enough spells. Plus more charges through her ability and signature item recharges spells... — Django · 4420 12/29/17
It doesn't work very well with Grotesque Statue either. The Statue discards itself when it's out of charges. This means using Recharge on a Gotesque Statue is riskier, because unlike other targets, you would need to use it before the Statue is out of charges and if you fail the still-good-for-one-more-time Statue will be discarded. — Daerthalus · 12 1/11/18
I have a rules Question about Recharge and Grotesque Statue. When i use Recharge and reveal a Chaostoken, can i use my last Charge of the Grotesque Statue to reveal 2 Tokens and if successful charge it up to 3? The Check needs to be finished first, before i discard the Grotesque Statue right? — ataniker · 7 1/13/18
Besides the above reasons, Angered Spirits also isn't a Spell or a Relic. — CSerpent · 107 1/17/18
@ataniker, "If Grotesque Statue has no charges, discard it." is triggered as soon as the charge is removed. Triggering conditions interrupt anything that is in the middle of resolving, so the GS's discard happens before the Recharge ability resolves. — CSerpent · 107 1/17/18
3

I've used this card in my sefina deck for 3 games so far and noticed the following:

This card feels really underpowered, bordering on unplayable. and is a lot of icons in any given bag. Relics you want to recharge like Grotesque Statue are nearly as likely to vanish on you as they are to come back.

I guess for the moment its an auxiliary purchase once you've splurged on Shrivelling (5) and Rite of Seeking (4) since you can just risk refilling them once they're empty. Still the lack of reliability means I'd probably just rather play around that eventuality than include cards which are just as likely to waste my time. Emergency Cache and even Contraband are better imo for the comparable supply and ammo items.

I think the thing that ticks me off the most is that if Jim Culver's ability was written slightly differently: you may choose to treat as , it would be exactly the buff this under-powered character could use to be both middling strength and really fun to play.

Difrakt · 1174
I agree except the Jim's part. I think he is more interesting in the way he was written. But on the Recharge -what a pitty that the authors have not included the 'fast' keyword to it.. That would be IMHO very good compensation for its xp cost and rather swingy effect. — XehutL · 47 1/19/18
Btw, better to save the last charge on Grotesque Statue just for the Recharge. It should improve the chances a lot. — XehutL · 47 1/20/18
You need a minimum of two charges to do that since if you commit your final charge the Grotesque Statue will end up in the bin before the ability can resolve. That’s a significant chance of losing half your investment entirely — Difrakt · 1174 1/22/18
Outch. I thought the counters will be resolved immediately after the Recharge action, which in turn does work as an 'interrupt' to them (ie that the discard action is put in the queue for the moment). But it seems you are rather right here. — XehutL · 47 1/22/18
Wouldn't this mean it triggers after? — MrHippy · 1 4/7/18
IF | 'Some abilities have triggering conditions that use the words "if" instead of specifying "when" or "after," such as "if the Ghoul Priest is defeated." These effects trigger in between any "when..." abilities and any "after..." abilities with the same triggering condition.' — MrHippy · 1 4/7/18
The comparison with Emergency Cache is confusing. The supply tokens can't be added to spells (right?) and in general have less value than spell charges. — Kvothe · 2 1/13/19
2

Hey, here is an official ruling about the interaction between the mystic player cards Eldritch Inspiration and Recharge.

Hello, I have a question regarding the interaction between the mystic player cards Eldritch Inspiration and Recharge.

So the question is: Does the word "Otherwise" from the card Recharge is referring to the revelation of the , , , or token or the resolution of it's negative effect? In other words, if I use Eldritch Inspiration to cancel the negative effect of Recharge (discarding the targeted asset) do I still get its positive effect (the 3 extra charges) or not? Thanks for the answear and your time.

Greetings, If you use Eldritch Inspiration to cancel the “…if you reveal a ___ symbol…” effect on Recharge, it cancels just the “discard the chosen asset” effect. The “otherwise” clause doesn’t kick in because you still revealed the relevant symbol.

Still a great combo for ensuring that Recharge doesn’t get rid of your best spell [or relic] asset, though!

PD: In my personal opinion the combo is not worth it XD. I now use Premonition and/or Olive McBride to somehow mitigate variance when using Recharge on my Pendant of the Queen...so being there is no way to guarantee the 3 extra charges, you've got to ask yourself one question before you put Recharge in your deck: 'Do I feel lucky?'... Well, do you, punk?

This plus Runic Axe that has heirloom? Thoughts?

J4mpet · 1
Wow that sure is a combo that exists. Maybe next time you could say something about the combo that you noticed, so you don't need to add a bunch of filler text, and actually make a review rather than a random question in the wrong place for it? — SSW · 190 12/26/22
I actually made a deck only around that concept, if you're interested: https://arkhamdb.com/deck/view/2604007 - While SSW is a bit direct, what he may want to convey is that places like Reddit/Discord/Facebook are more suited for this type of comments and the ArkhamDB reviews are better used to help other players understand the card more in-depths. — Valentin1331 · 24483 12/27/22