If you have no cards in your hand, exhaust Madame Labranche: Draw 1 card.

If you have no resources, exhaust Madame Labranche: Gain 1 resource.

Joshua Cairós
A Phantom of Truth #198. 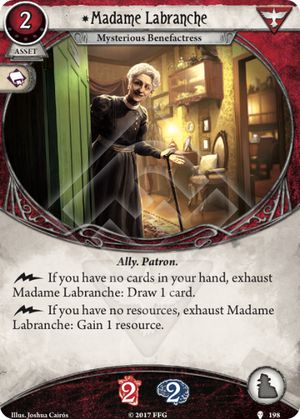 It takes the right kind of deck to get this old gal going but when you do she is a POWERHOUSE.

What is the right kind of deck?

A: A deck that eats cash for lunch, dinner, breakfast and every other meal, but likes to stay slim. Fire Axe+Dark Horse actually likes the cash but doesn't want to stockpile it, therefore Madame Labranche will keep you covered by kicking you up from 0 straight to 2 credits at the end of a round or even juices you up mid-battle while you swing your axe.

B: A deck that depletes cards quickly, this is generally a bit less common bot certain types of Wendy Adams or "Ashcan" Pete really do go through cards quickly and having the Madame Labranche around to jump start you when you hit rock-bottom can be a lifesaver.

If you're the -A- kind of investigator then seriously consider this chick in your deck. Heck even consider Charisma rather then swapping her out for some XP ally like Yaotl or Peter Sylvestre later. If you're the -B- kind then pass this girl by unless you think you can trigger her for the cash part every now and then too, if you plan to sit on a payload of cash, for the sake of playing something expensive down the line, then this gal probably wouldnt be much help at all.

The icon means that triggering it is optional whenever you feel like, this means that you can simmer a bit at 0 resources or cards if you feel like it for some reason, for example during a combat check with a Fire Axe and Dark Horse.

When you're committing cards to a skill test, there is a player window between the cards being committed and the result known, this means that if a card like Guts is the last card in your hand, and you play it on a check, you can trigger Madame Labranche before the skill becomes successfuly and Guts triggers the draw effect.

Tsuruki23 · 2275
One trick from me: with that babe, Fire axe and 1 resource in play you may activate fight, burn that resource, take another one from babe and immediately burn it for +4 swing. — KptMarchewa · 1 7/23/18
Ran her with Patrice and she's fantastic. Combined with the Violin and 2x Cornered, you've got the baseline to have loads of flexibility with resource gains and card draw/swap. — Krysmopompas · 290 9/14/20
4

Sugar Granny has gotten a lot more tempting with Cornered being part of the Survivor cardpool. In Yorick, who likes to pitch assets to Cornered and then replay them a lot, he can often run low on both cards and resources. Madame Labranche is very versatile in such a build, helping you replenish whatever you're short on. As a bonus, she's fairly inexpensive herself and has decent soak, so she fits well into a Yorick tank build.

Madame Labrance is... OK and fits in certain decks, but I probably see a lot more people running her than I should do. Yes, obviously she works with Dark Horse, and if you're going to be running on empty, you can hopefully use her every turn, and she has some nice interaction with Lucky! here. So all that's good. But even then the opportunity cost in playing her is quite large, and you might be better running something else.

Firstly, how often will you play her in time to make a decent profit? Most of the time you will be using her for resources rather than cards; all the decks that build around her tend to do that, so lets focus on that. (We're doing her a tiny injustice here, as a card is slightly better than a resource, but not by much. If you assume x1.2, you need 5 card draws to count as an additional "resource" which almost never happens with her. There is probably a cardless Survivor archetype with this and Last Chance waiting to be discovered, but for now its not well served enough to build around, so resources it is). To be better than Emergency Cache, you have to reliably use her ability 6 times. With the average game lasting around 15 turns, that's not unfeasible, but there will be games where she arrives too late. She delivers her value slowly, and generally we prefer spike value to drip value. She also has a 2 resource hump, so sets you back a moderate amount. None of this is major, but often you can get to the end of the scenario, have used the Madame 5 times and think, "wow, that was great", but it really wasn't - it was poor. You need 10 uses to say "wow!" and that is quite rare. A lot of people love the 2/2 soak for 2, and sure it is quite good, but it's not hugely significant compared to other allies (and Survivors are quite well served for damage soak anyway).

And that brings us to the big problem, the big opportunity cost - the Ally slot. The Ally slot is the strongest slot in the game, and by demanding this slot off you for her drip-feed of loot, she is punishing you quite severely. You're missing Peter Sylvestre(0), Peter Sylvestre(2), Yaotl, Aquinnah(3), and thats before we get into cross-faction allies for Wendy, Yorick, Pete, Minh and others, not to mention the campaign allies in Dunwich/FA (or the to-be-proven On Your Own). Yes, there is Charisma, but now you're paying XP for a moderate drip-economy card when you could be buying Will to Survive instead.

Anyway, I don't want to hate on the Madame. Like I say, she's not bad. But most of the time when I see her, I just wish my friend was playing Peter Sylvestre(0) instead.

duke_loves_biscuits · 1135
Well, I agree but as far as I know this card is mostly played in Dark Horse decks. I don't see anybody (who wants to play efficiently) taking her instead of Peter, you normally take them both (even if u don't have Charisma, cause she is a good meat shield )...I think the only dilemma would be Madame Labranche or Yaotl (Aquinnah 3 XP is bad). — Alogon · 873 10/19/18
Personnaly, I like her for the Fire Axe combo. No more ressources ? Ok, she gives you one and then fight with the +1 damage ability of the axe. Works pretty nice in my Dark Horse Ashcan, when Duke has to investigate... — Ackero · 2 10/19/18
Are you using Fire Axe / Labrance *every* turn, and thus reliably getting 6-10 used from her every game? Are you also running Emergency Cache and Take Heart for non-Ally slot resource income? If the answer to either is no, then your probably better with Peter someone else, even in a Dark Horse deck. — duke_loves_biscuits · 1135 10/20/18
Well, Madame without even a mention of Fire Axe? With her help that weapon can reliably deal +1 dmg with +2 combat bonus. You can ignore that, for me - this is huuuuge. Cache definitely cannot replace Madame in this synergy, more - Cache has in fact antisynergy with Axe since it abuses my possibility to deal +1 dmg in first attack. To sum up - it is not a matter of raw digits (will Madame give me more resources than EC? Well, she actually can), it is rather a matter of playstyle of survivors with Axe. Little bonus: I can consider an ally with 2hp/2sanity for 2 resources even with blank text. — KptMarchewa · 1 10/22/18
There is no player fast action window for Madame to get that resource for lucky. — lelel555 · 1007 9/12/21