Discard 1 card from your hand: You get +2 skill value for this skill test. (Limit once per test.)

Bravery is born when there is no other choice.
Joshua Cairós
The Boundary Beyond #160. 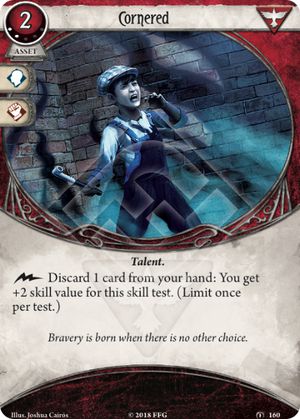 If you're Patrice Hathaway, just put that inside as a first upgrade. No question about it.

Still joyfull times. I can finally make decks that don't have Unexpected Courage inside as an obligatory inclusion. That's of course not a direct replacement that's ultimately better, but a solid thing to consider for consistency:

Onetribe · 211
A pretty valuable asset for William Yorick: discard a leather jacket to fight a monster, kill the monster and play the jacket from the discard! — mogwen · 210 8/4/18
Agree, this is definitely a Yorick card. He loves running a ton of items (with terrible icons), and he loves committing them to skill tests to get him in his discard. On the other hand, the 2-resource cost of Cornered is actually a big problem for him. It might well be worth it, but it's tough to handle when he was already the most cash-strapped investigator in the game by some margin. — CaiusDrewart · 1893 8/4/18
*to get them in his discard. — CaiusDrewart · 1893 8/4/18
I don't think the 2-resource cost is an issue. The huge benefit Yorrick gets from this card overpasses that so much that you can't even think of it as a downside. I actually want to play Yorrick almost exclusively because of this card!! — matt88 · 1927 8/5/18
Can someone explain to me why being 'cornered' is a 'talent'? — Difrakt · 804 8/23/18
Maybe it is meant to be a boon and bane to fight best when you are cornered? — Synisill · 386 8/26/18
I'dd just like to add that this is also a great Minh card. With Feed the Mind, Acidic Ichor and Cornered in play you basically have an infinite number of cards to feed into whatever you want to do, and do everything but evade like a champ! — Tsuruki23 · 1286 2/7/19
I've also found it very interesting in combination with Yaotl. I'm currently trying that deck in TFA, and so far, it's an excellent way to get things like desperate cards into the discard. — Eldan · 2 10/31/19
I can confirm perfect combo with Yaotl. Next good combination was discarding Winging It for +2 and immediately playing it from discard pile to get more clues. — johniez · 2 11/10/19
Do you guys know what happens if you have 2 of these cards in play? can i use the 2nd instance of cornered for the same test? — le_asmo · 1 4/30/20
@le_asmo: Yes, you can use 2 copies for the same test. „Limit“ refers to a card itself (unlike „Max“). — Astrophil · 1 10/4/20