Spend 1 charge: Investigate. Investigate using instead of . If you succeed, discover 1 additional clue at this location. If a , , , , or symbol is revealed during this test, after this test resolves lose all remaining actions and immediately end your turn. 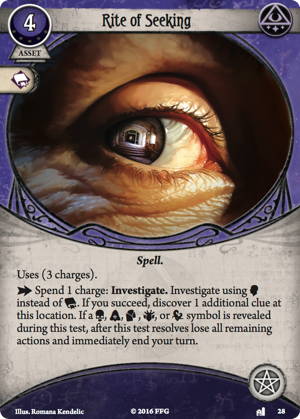 We're one core set and one deluxe expansion into this LCG and already certain paradigms are taking shape. Certain classes (like Guardian, or Seeker) are well equipped to focus on a specific task (monster hunting, clue seeking) and corner that task completely. Other classes, like Mystics, are not as clear. Cards like Scrying and Clarity of Mind suggest that magic can be used specifically to support your group by watching their backs, but there are alternative uses to mysticism.

Rite of Seeking and Shrivelling do something different, they can turn Mystics into makeshift clue hoovers or damage dealers. They won't be able to take on the role forever due to the limited charges, but in the meantime you can have Jim quickly suck up clues in low shroud places while Rex tackles the darker locations, or you can have Agnes pierce the mysteries that Roland Banks cannot.

Of course the card comes stacked with downsides that trip it up. First of all its expensive, and it takes an action to play it as an asset so the 'extra clue per investigate' isn't as strong as it sounds. If you're using this just to try and hoover up clues quickly you're trading 4 resources for 2 clues. Furthermore if you search multiple times in your turn (or as first or second action for any reason really) you risk triggering the end of your turn, which further adds to the chance that you will rob yourself of the action economy you're trying to save.

That being said if you're awash in resources, really need to move quickly, want to stay away from a dangerous clue ridden location, or need help piercing that 4 shroud location Rite of Seeking will allow you to get those difficult to grab clues. Probably the best use however is just allowing you to nab clues at the end of your turn while doing something productive with your other 2 actions. Combined with Drawn to the Flame you can those last sticky clues and make sure your team is done with the act before the threats really begin to mount.

I think this card is slightly outclassed by most of the other cards that do something similar: Sixth Sense, Clairvoyance, and now my new favorite Eye of Chaos. There are two exceptions though: characters that want access to RoS (2), like Sefina who can't take higher level mystic cards but really benefits from the extra willpower; and Mystics playing with exactly 3 players, where RoS (4) becomes a thundering powerhouse card. Clairvoyance 5 is similarly powerful for 3 players, but I actually feel like the 2 horror starts to become just too painful especially if you're recharging your charges.

The special token consequence is a little awkward, though you can play around it cleverly sometimes.

dubcity566 · 74
play around it? — MrGoldbee · 1315 11/5/20
Just investigate on your third action. I don't think Rite is outclasses at all- double clue spells are still amazing, and taking both of Shrivelling and Clairvoyance is going to horror you out faster than you'd expect. — StyxTBeuford · 12744 11/5/20
Agree with StyxTBeuford. "6th Sense" is best used in solo, but less so in multiplayer. And "Eye of Chaos", if played without curse synergies, is just plain more expensive instead of the spill over effect of other spells. It can get rewarding, in a curse deck (that can still pass the tests on drawing a curse), but without that, I would still always choose RoS over EoC. — Susumu · 271 7/21/21