The Red-Gloved Man
He Was Never There

Forced - At the end of the mythos phase: Discard The Red-Gloved Man. 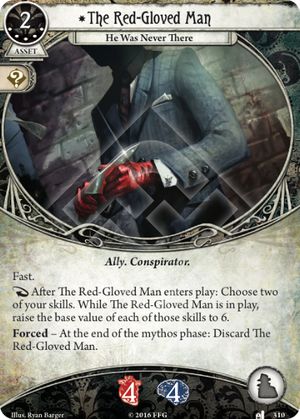 This card is awesome! And the best thing about him isn't the stats increase - which are brilliant - but rather the freedom he gives. You want to accept 3 attacks of opportunity while you investigate (probably at 6 ) - no problem. Move while under attack - fine. It's one turn where you can more or less ignore any enemies.

Conspiracy theories about Nyarlathotep notwithstanding, this ally is a powerful bomb. There are two main barriers to entry: obviously its whopping 5 experience cost per copy, and it being an ally it bumps off your Leo De Luca or similar unless you invest in Charisma which further increases the effective XP cost.

Frankly though, you get what you pay for, because the effect is game-swinging. As Duke has been doing for ages, increasing an investigator's base skill stacks with other boosts thus making key checks much easier especially on higher difficulties. For example it lets Wendy Adams swing her Baseball Bat on her combo turn with 8. It makes all those +2 effects from the 2 XP versions of Deduction and friends succeed more predictably. It even lets investigators with their low values evade if they need to get away after losing a key weapon... and as a action doesn't cause attacks of opportunity. And it can do two of these in a single turn.

It is also worth pointing out that, unlike most other fast cards, you do not need to play him on your turn, so you can drop him in a pinch to boost your stats for a crucial check or nasty revelation. It can even save you from a poorly-timed Pushed into the Beyond or similar.

On top of all that he usually sticks around long enough to soak up a massive turn of hits with his 4 health 4 sanity.

If an investigator has The Gold Pocket Watch (probably another investigator than you given the extravagant XP cost) then they can skip the mythos phase so you get two turns of the power of crawling chaos. This is exactly the kind of end-game synergy between characters that will win campaigns.

Playing as William Yorick. I was so flush with experience points that I sunk 10 into two copies of The Red Gloved Man right before Shattered Aeons just to spend the experience. Was not a fan of him before then.

But a few turns in I wondered why I hadn't made him one of my first purchases. With Yorick... he just kept coming back! And when he did he was always helpful! We're still not through the scenario but he's so cheap and good at what he does that he is basically a natural fit with Yorick.

I still don't know if I would want to play with him in a deck that did not have some way to get cards out of the discard pile, but this is a card that I've underrated, especially when coupled with Yorick. My partner also was watching and he (who recommended I play Yorick) also discovered that this was a natural fit.

NTGuardian · 7
Survivors can revive RGM up to 4 times with chance encounter and Ressourceful, though you'd spend an action on that each time. THis could be compensated with Leo de Luca. Oh and you could return him to your hand before the end of your turn with Calling in Favors, but thats another action. — Django · 2622 2/8/19
0

I think if you're a survivor you can get The Red-Gloved Man to appear five times, if in your hand you have at least one of him, 2 copies of A Chance Encounter and 2 copies of Resourceful.

Discard him at the end of the Mythos Phase.

Next turn: Play A Chance Encounter and put The Red-Gloved Man into play.

Commit Resourceful to a skill test, and win. Retrieve A Chance Encounter from your discard pile.

Commit Resourceful to a skill test, and win. Retrieve A Chance Encounter from your discard pile.

I'm sure some other deck techers have stumbled onto this awesome combo. That said, I don't see why it wouldn't work with other allies.

AbsolutZer0 · 13
Okay, but the RGM is a lot less powerful when he takes an action to play and doesn’t buffer your stats during the next Mythos phase. He also doesn’t protect very well against AoO because playing ACE provokes an AoO while he isn’t there to soak. If your goal is just to have multiple turns at a high base stat, Trial by Fire (recursed with Resourceful) may be more effective in many situations and 0xp. — Death by Chocolate · 14 9/15/19
Agreed, just use Resourceful and Trial by Fire. Using Ace on RGM is a pretty big waste. — StyxTBeuford · 1332 9/15/19
Just play William, talk your seeker friend into giving you the No Stone Unturned LV5 search so you always get this guy, and recur him every time you kill something. — TheNameWasTaken · 3 9/15/19
Yorick + RGM is always a solid way to go. The question these days is whether there's enough XP to go around. Yorick really loves Timeworn Brand. — StyxTBeuford · 1332 9/15/19
Ah see, I don't have The Circle Undone cycle yet, so I didn't know of Trial By Fire's existence. Anyway, I thought it was a neat combo. — AbsolutZer0 · 13 9/17/19
Calling in favors to return RGM to you hand after you had A Chance Encounter with him? — Django · 2622 9/18/19
No AOE on Fast. — MrGoldbee · 21 6/15/20
0

How does The Red-Gloved Man (RGM) interact with Monstrous Transformation? Both set base skill values to a specific value but which one takes priority? The one that entered play last (which will almost always be RGM)?

Django · 2622
The Red-Gloved man *raises* the base value. Whereas Monstrous Transformation *sets* it. AFAIK, *set* takes precedence over pretty much everything. Thus a location with Obscuring Fog and The Skeleton Key still has a shroud value of one. — YorickPlays · 1 6/7/19