When an asset you control is defeated: Gain X resources, where X is the total amount of damage and horror on that asset. Shuffle that asset into your deck.

effect: +2. You may move up to 2 damage and/or horror from Tommy Muldoon to an asset you control, or vice versa. 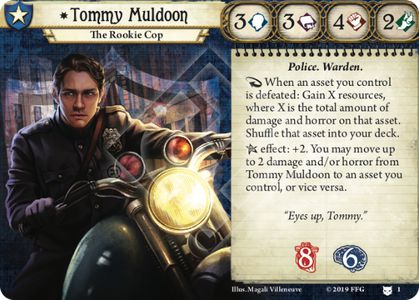 Most members of the Muldoon family are part of the Boston police force in some way or another. Not long ago, the youngest Muldoon brother, Tommy, got his badge. Armed with an eye for detail, fierce courage, and his trusty rifle, Becky, Tommy is dedicated to law enforcement... but when he was loaned out to the Sheriff's Department in Arkham, he found that he was not prepared for the bizarre crimes cropping up in this strange town. Even so, whether the crime scene is a smoky speakeasy or a bloodstained altar, Tommy will not rest until he can bring the culprit to justice. 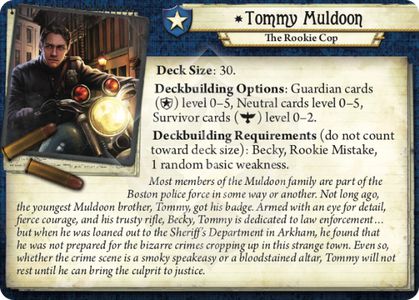 Deck Building
Search for cards usable by this investigator
Reviews
21

She's a junkyard dog lookin' for snacks in all the wrong places! He's a rookie cop from the wrong side of the tracks!

Yorick's career-minded brother joins the battle, and the similarities are plentiful. Both are blue-and-red. Both wallop baddies. Both are 8/6 Health/Sanity. Both are 4/3/3/2 in Combat/Willpower/Something/Something. Both laugh at the "discard pile". And both are Tanks.

There's a divergence of method, though: where William wants to run cheap with welfare, fire safety, the CIA, and cutlery, Tommy here wants to run rich, with dogs, cops, clergy, the FBI, and different cutlery.

HanoverFist · 551
Tommy and Yorick both also get excellent mileage out of True Grit and Something Worth Fighting For. Its worth pointing out that Survival Knife is not a great weapon for him because the attack has to deal damage rather than horror, and deal damage to you and not your assets, in order for you to get the trigger. Better to just load up on Machetes, especially with a Bandolier that gives you money when you no longer need it. — The_Wall · 261 10/2/19
That's not true @The_Wall . The survival knife triggers off damage that targets you and it doesn't matter where it is assigned. It's a decent option for this character to have. — Bronze · 171 10/3/19
Rifle works better than it appears, the ability to cycle dead allies into bullets is pretty neat. — ezrk · 1 8/2/20
14

Tommy Muldoon can use to great effect The Red-Gloved Man: just wait until you get engaged by an enemy (or force it with First Watch, "Let me handle this!", On the Hunt), play at fast speed RGM for 2 resources, get 2 skills to 6 base, choosing whatever you need most for the turn, do 3 actions taking attacks of opportunity so RGM is defeated in the enemy phase, then use Tommy Muldoon's reaction to get 7-8 resources and shuffling back RGM.

You net 5-6 resources every time, get free turns while engaged, 6 skill base value for 2 skills of your choice and you never lose RGM because its shuffled back to be abused again.

Don't write many reviews, but wanted to chime in on this one. IMO, Tommy Muldoon is a powerful investigator who isn't very fun to play, and I don't recommend him. The combination of Guardian and Survivor cards is pretty good (Yorick thinks so too), but he has a few problems that I think make him unenjoyable, specifically because I think he fails to fulfill his "power fantasy" (the thing you pick him and picture yourself doing/having fun with).

Tommy is a powerful investigator, and if you lean in to his Guardian and Survivor roots, you'll do fine to great for yourself. I expect comments on my review to say as much. But he didn't really deliver what I was hoping for, and I suspect others feel the same.

LastWalter · 33
I’m not the biggest Tommy fan, but the latest cycle makes him for my money the absolute best user of Bless cards. — StyxTBeuford · 12744 4/26/21
I played TIC With Daisy and Safina, I don’t think we drew rookie mistake once. We didn’t even see it that often, and when we did, it was because scroll of secrets was tossing it into the discard pile. And even the longest games, he didn’t reshuffle his discard. — MrGoldbee · 1315 4/26/21
Guard dog (2) Is a very cheap ally, shuffling into your deck, getting damage, getting enemies off your allies, and filling your gun. With trust it, it pays for itself easily. So you don’t need agency backup if your teammates are picking up all the clues. Cat is amazing though. — MrGoldbee · 1315 4/26/21
I just played him in Dreameaters and I think he is quite strong. I didn't find him much fun to play though. I didn't find the defeat your asset and gain bullets interesting. I would have to take an app just to reload Becky. I also got caught in a loop somehow where Rookie Mistake was getting constantly reshuffled and I wasn't able play any soak assets. As — TWWaterfalls · 862 4/26/21
I made a Tommy deck with the Spirit of Humanity/Spiritual Resolve combo and I had way more fun than I expected, couple that with the upcoming The Star tarot in RtTCU, and you have infinite ammo and resources forever. Also, a rarity to Tommy decks, I loaded it with card draw just to sacrifice 1 copy of Spiritual Resolve to Rookie Mistake and get the cards I needed. Twas a very fun bless generating/monster-killing deck. — toastsushi · 62 4/27/21
Tommy is a lot of fun to play or partner with, but do not take him to Dunwich. The milling effects and cards dealing direct damage make him a misery to play. — LivefromBenefitSt · 937 4/27/21
I wouldn't take him in Innsmouth either. Avoiding spoilers though. — LastWalter · 33 4/28/21
3

I didn’t see much potential in Tommy Muldoon, playing him in duo. He wasn’t that great at crime solving and he wasn’t that great at fighting. Three player changed my mind. With some copies of Solemn Vow, Tommy has the capacity to shield teammates from ridiculous amounts of damage. Especially in the Innsmouth Conspiracy, where enemies do damage just by engaging you, he can protect in ways that Roland, Zoey or Nathaniel simply can’t.

When he absorbs hits, he gets cash, or bullets, which let him absorb even more damage. The other players furiously focus on clues. As they ignore problems, he triggers Tetsuo to restore items from the trash or let people search their decks and hit those effects. (A cop who causes a lot of destruction? Clearly the 1920s were different time.)

The thing that Tommy doesn’t do well, which is draw, is much easier to deal with now that scroll of secrets is a fast action. Teammates should also find ways to help Tommy get initial cash, so he doesn’t have to choose later on between soak and damage. With a pair of Reliable’s on Becky, he can let his gun do all the talking his badge won’t.

MrGoldbee · 1315
Tommy is definitely a good protector, although to be honest I think Yorick does it better. Yorick is a fiend for protecting the party when properly piloted — NarkasisBroon · 10 11/19/20
I would argue that Tommy has access to a lot of the best survivor tools with 0–2, and agency back up eventually makes him psychotically good. If you’re going to spam eucatastrophe and get all your cards back then Yorrick is super good. — MrGoldbee · 1315 11/19/20
When Tommy is really singing, watch out! He generates resources/bullets for Becky like nobody's business. And the comnstatntly reshuffling assets into your deck really helps with diluting your deck to prevent weaknesses from being drawn. He's maybe nbetter in 3= player counts, but he's no slouch. — LivefromBenefitSt · 937 11/23/20