: Fight. You get +1 for this attack (+2 instead if you have 3 or fewer remaining sanity). If this attack defeats an enemy, you may heal 1 horror. As an additional cost to initiate this ability, you may take 1 horror to have this attack deal +1 damage. 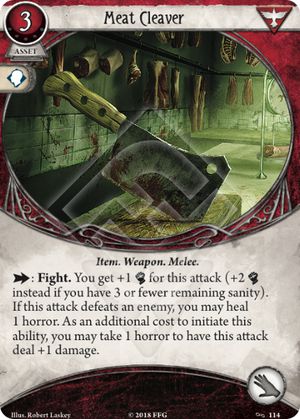 I 've been waiting for this moment for quite a long of time. Finally, a Survivor weapon worthy of Fire Axe gets released. Of course, in order to make this weapon worthwhile you have to take horror almost every time you attack, but you can easily negate this disadvantage by running Peter Sylvestre and particularly his upgraded version and maybe some other soak along with him, like Cherished Keepsake. Now this makes it more of a build-around card, just like Fire Axe, but honestly, since (in my opinion) Peter Sylvestre is one of the best allies in the game, I think this is totally fine. The other fact is that this weapon becomes more powerful when you are at low sanity, so you actually want to be taking the horror anyway and by having Peter by your side, this should not be very concerning. You can even heal horror when using this card if you want, by assigning the horror you take on Peter when you attack and healing a horror from your investigator card when you kill the enemy.

This card also opens up interesting deckbuilding options and upgrade paths. Since you want to be at low sanity anyway, it seems like you can benefit from Desperate cards more, Fight or Flight becomes more powerful, and with the ally Yaotl you can focus more on the "Desperate" side of things. Also, some investigators work better with this card than others. It seems like it is a good fit to investigators with low sanity and there are some investigators that will still prefer Fire Axe over this. I will now go through a list of investigators who can use this and outline possible interactions:

A significant disadvantage this weapon has is that it can be painful to attack 3 times in a row when you 're facing a tough enemy, so it's good to have alternatives for when you get swarmed or when you 're up against a boss. So, considering this, this card does not make a good pair with Will to Survive, which annoys me quite a bit, because a Survivor running Fire Axe was facing the same problem, so this weapon doesn't change that a lot. It doesn't make Will to Survive unusable, but taking 3 horror for 6 damage in one turn isn't really the best thing you can do, unless your Peter is fully healed.

In the end, I think this weapon is best for Calvin, Silas and Rita. Calvin gets the most benefit out of it and the other two are good fighters and have alternatives when they are facing a tough situation. Other investigators can also benefit from it, but I think these 3 are the best candidates.

matt88 · 2283
Carolyn can also use Meat Cleaver, and has some interesting interactions with it. Not sure it's worth it however, with a combat stat of only 2. It might still be better than her alternatives, if you really want to use a weapon with her. — neescher · 230 3/18/19
Good point! I totally missed that! I also forgot about Zoey/Rex/Jenny/Jim! I'll edit my review to include them! — matt88 · 2283 3/18/19
yorick can use it with the keepsake combo (it soak horrors and came back with yorrick ability). And considering that you heal horrors on final blow, it's possible to use it's ability 3 times in a turn when you are outnumbered, just if you kill 1 enemy or 2. I love this weapon on him — nikkapo · 1 5/8/19
Don't forget that Lola Hayes can make use of this item as well. She can even combo it with St. Hubert's Key to ensure that she's always on the threshold of madness in order to get the combat-stat boost. — ClownShoes · 21 7/12/19
I actually adore this Weapon for Zoey as it gives her a way to have sustainable horror healing later on. It's also a thematic win. — StyxTBeuford · 12490 1/28/20
This becomes effectively a 3-damage weapon with Agnes. You can get an insane +combat modifier with Fight or Flight. — Zinjanthropus · 164 5/31/20
@Zinjanthropus I have been running a really effective Meat Cleaver Agnes with Fight or Flight and using Resourceful on the third swing to recur. You can do up to 7 damage during your turn with a combat score at 8 or 9 easily. You typically heal back one horror and put another on Peter so you only have one horror to really worry about. — Time4Tiddy · 152 11/12/20
2

If you’re willing to use up an arcane slot, this can be a tremendously fun weapon for a guardian to Enchant for Agnes. Between two and four damage for an alpha attack, depending on your starting horror and whether you want to take one and/or heal. Using a holy meat cleaver has a huge impact on your sanity!

MrGoldbee · 1080
Yeah, the cleaver was already a pretty spicy pick for Agnes, and the possibility of enchanting it might edge it out over Sword Cane. — SGPrometheus · 554 5/30/21
It's a real shame Agnes's deckbuilding can either include enchant weapon or meat cleaver but not both — NarkasisBroon · 1 6/2/21
1

This is not just a good card when played in a specialized way to maximize its benefits. I want to make it clear that this weapon is also very useful as just a general purpose weapon in the Survivor weapon pool. At the time of this writing, survivors without access to weapon-oriented classes have a very limited selection of weapons, and this can be the most reliable available weapon if you don't want to deal with the weird limitations of the other survivor weapons. The Fire Axe is a great weapon, but it forces you to give up all your money when you use it, which is really annoying if you don't want to play that type of character. And the Baseball Bat is also a great weapon, but aside from requiring two hands, it can suddenly disappear at any time and leave you without a weapon. The Meat Cleaver may look like a weird weapon because the way it manipulates sanity, but it really isn't that difficult for a normal character to use. You do not actually need to reduce your sanity to three to use the weapon as a + 1 bonus is still just as good as a machete, and while your sanity does tend to go down when using the weapon, it is not absolutely essential to play with Peter Sylvestre; it is pretty common that it gives you back the sanity you lose, so your overall sanity loss is usually pretty slow, and survivors have lots of other ways to soak some horror if necessary. In any case, the reality is that if you want to be serious about fighting you normally need more than one weapon in your deck so you can actually draw one when you need it, so even if Meat Cleaver is not your very favorite weapon, it is still available as a perfectly functional weapon to round out your deck.