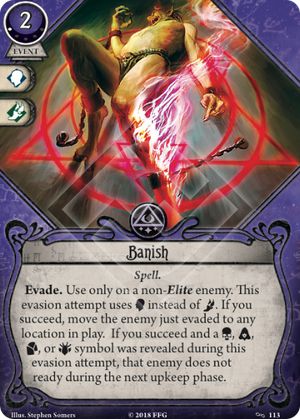 Banish is an alternative Blinding Light, one of the top -worst- cards in the game. Banish is very fair compared to it's nephews at 0 and 2 XP.

If you haven't tried them yet, Blinding Light is a real chore, they are expensive, have a game-loosing token effect and a maddeningly high chance to just whiff without any in-built +. There's also the conditional element that even if you succeed, this limited and temporary a solution to an engaged enemy might just not yield the result you want, and they're right back in the next round (Rita Young very literally gets a free copy of Blinding Light every turn, except without the action losses, free of charge and some extra mechanics too).

Banish is almost as bad as Blinding Light, it's expensive and the lack of + is crippling for a one-off effect, no chance of lost actions however is a big deal and unlike Blinding Light the moved enemy will probably not be coming right back next turn, in some cases it might even be considered to be "defeated" because it lacks a hunter keyword or isn't a threat, for example if you send the humanoid enemies in Dunwich to finished locations. The nonelite mechanic is a big bug though, preferrably I'dd have liked to see the effect be able to target Elites, for that pinch-evade, just not move or extend-exhaust them.

Banish is, in the end, better than the Blinding Light duo, but that is by no means saying much. Grab it if you like the idea of getting enemies out of the way.

This is the card that Blinding Light (or its more experienced cousin Blinding Light) could have been! While this does not damage the enemy in question (and this doesn't work on Elites, which can be significant), it does push the enemy away to another location. Also, the bad token text on this card is way more favorable than Blinding Light as it could effectively lock down a hunter enemy for a long time; perhaps enough time to complete a scenario without worrying about it.