You have 1 additional arcane slot, which can only be used to hold a Spell or Ritual asset.

The body is but an extension of the mind.
John Pacer
The Secret Name #112. 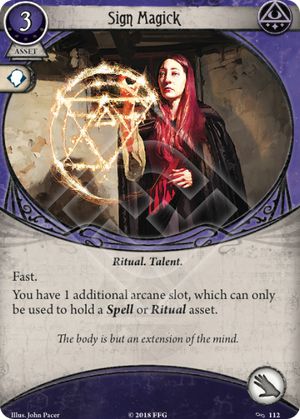 I'm not sure why the designers are so dedicated to making it difficult to get an extra arcane slot. An extra ally slot is more powerful, yet Charisma is way cheaper and more efficient than this card. It is true that a lot of characters would really like to have an extra arcane slot, but that is because the arcane slot limit is kind of an annoying inconvenience that would be cool to circumvent, not because it is some vital part of game balance that would be super powerful to overcome. Yes, it would often be worthwhile and convenient to play a third spell, but not at the cost of nearly doubling the cost of a spell (is that third spell you are playing really worthwhile when it costs an extra three resources and a card?). And on top of that this card still has a significant downside that it sits in your hand useless until you actually need to play a third spell. Again, Relic Hunter lets allows you to break the accessory limit as a permanent (!) for no cost other than 3 XP, so why does this card have to be so expensive? I’d think it was still a bit pricey, but more reasonable, if it had a resource cost of 2. A resource cost of 3 just seems mean for a card that does nothing but permit you to then pay for another card which is probably not even one of your best two spells (since those are in your first two slots).

ChristopherA · 86
Yea the only saving grace with this card is that it is Fast, but it being Fast also means it no longer synergizes with Uncage the Soul. Naturally, you can play Uncage the Soul on the spell you now have a slot for, but it really just means you need yet another cards to match up. Perhaps we will see an upgrade in Return To Circle Undone. — LaRoix · 1503 5/30/21
It has actually been kind of confirmed, that there will be an upgrade of this card in the Return box. There's a picture released in the Preview article by FFG, that can also be found on BGG, where you can see it. (Albeit not read, what it will do. better.) There will also be a new Tarot card, "The Hierophant • V", which is already listed here. Until then, I found the Cat ally from Jaqueline qite useful. I run it in Akachi in TFA, where I wanted spells for fight, investigate and evade. You often get into the situation, when you just have one or two charges left on a spell and want to play a third one. The cat is then perfect to get your slots temporarly up to three and use a soak, once one of the spells is empty. Sure, Ally slot is also preciouse, but as long as your only other ally is the Initiate or Renfield, you get by fine. And once you get your Twila or Dayana, there is always Charisma. — Susumu · 165 5/31/21
4

This card really is the Bandolier of spells. Great if you're running a spell-heavy deck, but this is not necessarily a good thing, because Bandolier itself has some issues in regards to its playability; issues that are not unlike other cards that can hold slots such as Daisy's Tote Bag or Leo's Mitch Brown. These cards do nothing by themselves, but rather enable more space for other cards. The issue is when you draw all those cards.

The good thing about Sign Magick as compared to the 'additional slot' cards is that it is fast. This really helps to offset the pressure that comes from playing it. Additionally, the 3 cost of this ritual plays very nicely with Uncage the Soul by choosing to pay the action to play it in exchange for the resource cost. That's some great flexibility in how you pay for these things.

Darthcaboose · 224
It is never a waste of three resources drawn early since you don't pay until needed (fast) as you said - it's just a dead card in hand with a weak but relevant pitch icon. — Death by Chocolate · 979 4/29/19
3

I think this card is an exciting addition for a sealing Mystic, as it gives them the ability to have a Seal of the Seventh Sign, 2 Protective Incantations, and a Chtonian Stone on the board all at once. It can also be used to turn the new Enchanted Blade into basically a two handed weapon if you really need those Arcane slots.

Xenas · 6
An interesting alternative to Book of Shadows (3) for builds that don't need charge replenishment — Chitinid · 14 3/17/19
This card is way better than Book of Shadows (3). Compared to it, you get the benefits of making it fast, costing 1 less resource and saving you 3 XP, for the drawback of not being able to add charges to spells, which is very minor. The restrictions on spell and ritual assets is also irrelevant os of the time of this release. — matt88 · 2358 3/17/19