Spend 1 charge: Heal 2 horror from among investigators at your location. 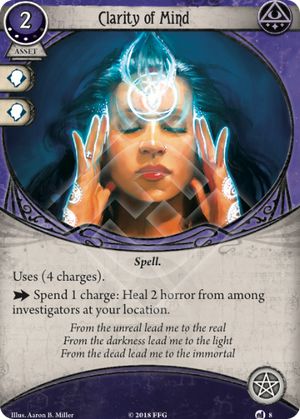 Even though I wrote an a bit doubtful remark in flamebreak's recent review, I now played this card with Carolyn in a campaign, rather than First Aid. It had been under perfect condition for this card: together with Agnes (and Minh) through Carcosa.

On paper, these two cards are very similar in cost: number of uses, resource cost, XP of the upgrades are all the same. First Aid can heal horror and damage, even on allies, and is a slotless talent, while with this card, like pointed out by flamebreak, Carolyn's ability can easily net two resources to the group in one action. Overall in a vacum, I would estimate First Aid's advantages to be bigger, yet, there had been a couple of reason, I did not choose the other card.

First, I had two copies of Arcane Research, so the cost in XP is really not an apt one any more. The difference of 4 XP among 2 copies is huge. I had two other main healing assets in my upgraded deck, Ancient Stone and Liquid Courage. It was quite a shame, that the Agnes' player did not slot Drawing Thin to at least attempt to forget her Dark Memory while drinking. Not that I think jumping through these hoops would have actually worked, but it would have sure being fun and thematic at least trying. At 1 XP each, Clarity of Mind clearly won the popular vote against Liquid Courage from all three of us. For 5 XP (thanks to Shrewd Analysis) I got both copies of the Ancient Stone, and that was so much better, than two copies of First Aid could ever be (at 1 XP more!), upgrading other great cards like Stand Together and even the upkeep phase, i did not need to use a "draw 1 card" action just for the trigger one time.

Second, I had the Eldritch Sophist as one of my allies. Clarity of Mind is cheap to play, in particular with Ever Vigilant, but I never needed 8 charges from 2 copies, even with Agnes vs. who's name she liked to call. (Also, because it was not the only card, I had for horror healing.) Of course, the secrets of the Sophist were always well spend, on Carolyn's stone, but even more several cards from Minh. But with his ability, Carolyn also became kind of Agnes' Venturer, loading up her Shrivelling or Rite of Seeking, with spare Clarity-charges.

In summary, this card was pretty great in my deck, and I likely would take it again in Carolyn. Still, I don't see it in any other investigator's deck, not even in Agnes, for whom 2 horror heal in an action kind of equals 2 testless damage in an action, which is quite awesome. For one, the arcane slot is among the most competed slots in . A power mage will almost always want to put a big fight and a big investigate spell into his or her main arcane slots. Now the card pool is in flux, we got (or soon to be getting) almost everything but footwear converted into an arcane slot, and I'm quite stoked for the cards spoiled from "Return to the Cycle Undone". But there are so many other options, for evading or sealing, or maybe even a Sixth Sense next to a Rite of Seeking for charge preservation in 4 player games, I would rather slot.

Second, this card was 1 XP (and the opportunity cost to have an awful card in the lever 0 deck) in a Carolyn deck. I would consider it still 3 XP in any real . Why? Because Carolyn (as of now) has only 3 viable cards, she can upgrade each twice with Arcane Research: Clarity of Mind, Deny Existence and Blood Eclipse. CoM is the "mandatory upgrade", you want to flush the level 0 version out of your deck ASAP, DE is the "great upgrade", something to pleasantly anticipate after scenario 3 and 4, BE is the "luxury upgrade", nothing to sneeze at for a free upgrade, but not that much better than the level 1 version. The mental traumata are not a real cost for Carolyn, the 2/15 and slots rather something to consider. At least the upgraded Deny Existence will free some slots again for a couple of level 1 or cards. Blood Eclipse was also a fun card to play in Carolyn with Brother Xavier. Of course, real wizards will also take Arcane Research, but they have so many spells to choose from, they can't really say, "this Clarity of Mind cost me only 1 XP". For them, AR is just a flat +2 XP each scenario, even with several side stories stuffed into the campaign. Carolyn can simply either take the 12 XP discount from these six cards, or not. It would need several new valid upgrades for her to reevaluate this card "at level 3".

Susumu · 217
The Arcane Research point is a very fair one. Carolyn has plenty of spare sanity, but only a few places where she can reliably get AR's benefit. There's this, Deny Existence, and Blood Eclipse just off the top of my head, no significant spell assets or events I can think of otherwise. So yeah, normally I'd say use your AR XP elsewhere, but she kind of can't as much, so this seems good. — StyxTBeuford · 12720 3/29/21
There actually is currently one other spell, Carolyn could in theory upgrade. But it would only be 1 XP saved and a card, which IMHO be a waste of a deck slot in Carolyn anyway: Eldritch Inspiration — Susumu · 217 3/29/21
3

This looks like high value upgrade for Agnes. It heals 8 for 2 resources, a card and 5 actions (1 click/horror) which is more efficient and more powerful than all of the other available options (except possibly the upgraded Peter Sylvester but this does not allow her to activate her power). It will probably be my first upgrade for Agnes the next time I play with her.

I'm not usually too big on horror healing cards, but this is actually quite strong on Carolyn Fern. Since you can split the horror between multiple investigators, they each get 1 resource. Heal your friendly Mark Harrigan or Roland Banks who are very prone to go insane, but also need the resource. Another option would be to run this with Carolyn Fern in a group with Agnes Baker, who can then go ham with self-inflicting horror cards like Meat Cleaver, Forbidden Knowledge or Painkillers.

flamebreak · 19
I still think, "First Aid" (3) would be the better card, because it can heal Allies, who have triggered abilities to deal damage or horror to them. But "Clarity of Mind" can be the cheaper upgrade, if you have the level 0 cards in your deck and take "Arcane Research". — Susumu · 217 1/31/21
Yeah there’s really no point in taking this when First Aid exists, or Book of Psalms. — StyxTBeuford · 12720 2/1/21