As an additional cost to play Blood Eclipse, take 2 damage.

Fight. This attack uses instead of . You get +2 and deal +2 damage for this attack. 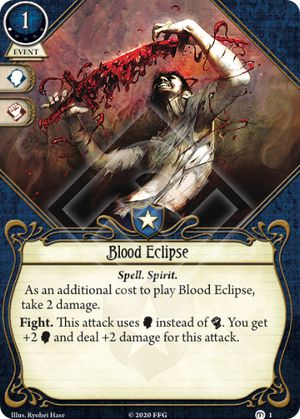 I think this is a much better card than Blood Eclipse (3). At level 1 it can fit into many more decks and doesn't require such a large investment to add in. And really, what are the drawbacks? It locks you in at 2 damage for +2 damage? That's probably what most people will be using level 3 for anyway.

I'd consider this an auto-include in any Tommy Muldoon deck. The ability to trigger the destruction of virtually any of your damage soak assets can be very useful if you're strapped for cash or trying to empty an asset slot or trigger a death rattle.

Really excited to see this card.

DavidRyanAndersson · 47
I'd definitely use level 3 as a 4 damage attack sometimes, but I agree that with the level 1 card existing, I don't think I'd spend 2 extra XP very often to regain the option. — Yenreb · 15 8/14/20
I would perhaps upgrade to level 3 with Carolyn and double Arcane Research since her upgrade targets are limited. — Defel · 4 8/14/20
I wouldn't personally waste Carolyn's off-class slots on Arcane Research. I do like level 3 Blood Eclipse on Carolyn though and I think that the ability to defeat a 4 health enemy in one shot is worth mentioning though, especially for investigators like Carolyn who might otherwise have trouble doing that last bit of damage and could also save you an action against 4-health enemies. — iceysnowman · 158 8/14/20
How do you recommend to heal up after using this? For Carolyn painkillers so she can heal her horror and profit. Other guardians just tank it cause they have 8+ HP? — Django · 4246 8/14/20
@Django yeah, pretty much. Tommy can kill one of his assets with it for quick cash/bullets, Mark and Leo can put some in their allies. My problem with using this is that it uses will instead of fight, which only Leo is really good at. For others, it's going to be hard waiting for a 4-health enemy with low fight. Except Tommy, who just wants the damage from it and is willing to use this on rats. — SGPrometheus · 664 8/14/20
Zoey's Willpower is also 4. It fits better for Leo than Zoey maybe because he plays soak so easily, but he's not the only one with the Will for it. — Yenreb · 15 8/14/20
The one time that I used the Level 3 version, I combo'd it with Brother Xavier for a 6 damage burst. It actually worked quite well, because BroX had mostly been soaking horror. I suppose most of the time this is better though. Also, either is pretty worth considering in Calvin, I would think. — Zinjanthropus · 209 8/16/20
A couple other use cases: Calvin can use this, assuming he's already scared enough to have sufficient will, and wrecking himself up a bit for more fight/agi. Yorick can use it as a handy 3-dmg nuke at a respectable 3+2 will, with soak rivalling or exceeding Tommy & Leo. Lastly, Marie Lambeau may like a 3 dmg nuke if her arcane slots are occupied. Thematically, tho, I love the idea of Leo using this to "fire" his Hired Muscle when he doesn't wanna pay them. — HanoverFist · 532 9/11/20
The combo of playing this in Carolyn Fern with 2 copies of Arcane Research is neat. Free upgrade to the level 3 version. If you play cards like St Hubert Key, Brother Xavier or Hawkeye Camera, you can get more Will boosts to increase the chances of landing the hit. BUT, Carolyn can equally take Spectral Razor. It does the same thing as this level 1 version of Blood Eclipse, without costing an XP per copy. So if your Carolyn deck isn't using the full 15 slots for Seeker/Mystic cards, then Spectral Razor is just "better", since it doesn't cost an XP, right? — VanyelAshke · 167 11/14/20