When an enemy attacks you during the enemy phase (before resolving that attack), exhaust Survival Knife: Fight. This attack targets the attacking enemy. You get +2 and deal +1 damage for this attack. 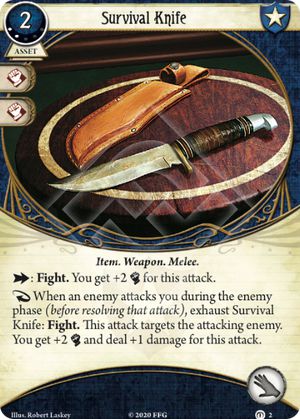 One part of this card that might not be obvious at first glance is that if your counterattack defeats the enemy, it effectively prevents the enemy attack from resolving, unlike the level 0 Survival Knife. Besides this, the timing change also allows you to counterattack, then respond with other effects like Dodge if your attack does not destroy the enemy. This seems especially tempting with Diana Stanley who likes using cancel effects. With the +2 combat bonus, this card is a definite consideration for many investigators. In comparison, the nerfed Machete costs the same XP, gives only +1 combat bonus, and has the potentially dangerous limitation of doing less damage when you are engaged with more enemies. If all of the attacks hit, survival knife does 5 damage versus 6 for machete. Timeworn Brand is usually superior, but the 5 XP and 5 resource cost are limiting. Importantly, a Survival Knife complements other weapons and other copies of itself by increasing the total damage done in a turn. 2 survival knives can do 7 damage in one turn. Overall, with the good combat bonus, low cost, synergy with itself and other weapons, and lack of drawback, I think this is probably the most broadly useful weapon for guardians at below level 3. I’m excited to use this card, especially with Diana.

jmmeye3 · 571
How good is this for solo Guardians? — 13rock · 1 8/5/20
I think another underappreciated aspect of this card is it's potential to protect you from enemies hunting. Many campaigns have Hunter enemies with 1-2 health that can occasionally be troublesome if they're chasing the investigators around. With Survival Knife (2), you have the potential to let them hunt into the Guardian and die before they have a chance to attack — DigitalAgeHermit · 17 8/15/20
@13 rock: True! That can save you actions, too! — jmmeye3 · 571 8/17/20
oops early post. #13rock: I think it's as good for solo as it is for teams. @DigitalAgeHermit: Yes indeed! — jmmeye3 · 571 8/17/20
Though you can't use it with many investigators currently, this weapons combos incredibly well with survivor's Stunning Blow. If you commit SB to the test during the enemy phase and the 2 damage is not enough to kill the enemy, it will effectively exhaust the enemy before it attack, thus preventing it's attack. It will refresh directly afterward, but you avoided the attack and got a sneaky 2 damage in. It's only possible in Zoey, Tommy, Yorrick, and Lola right now. — soakman · 25 9/6/20
It's also worth mentioning that this version is now effective against enemies that only deal horror. — mahercbeaucoup · 1 4/16/21
An excellent side weapon for a second (or third, or both third and fourth since it exhausts) hand(s). Makes for a reliable basic attacks saving ammo and charges on 1HP foes AND, if you're savvy, works wonders in that whole action economy thing. — Fovar · 1 5/28/21
Get this on Dianela somehow. Kill like a maniac. — MrGoldbee · 1233 9/11/21