Alyssa Graham
Speaker to the Dead

Exhaust Alyssa Graham: Look at the top card of either the encounter deck or any player deck. You may then add 1 doom to Alyssa Graham to place the looked-at card on the bottom of its deck. 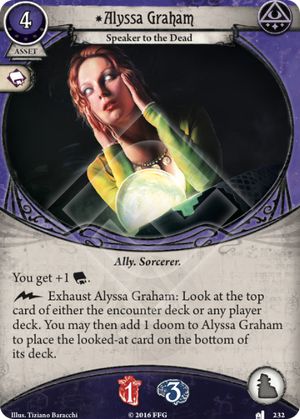 I played hollow eyes in my caster daisy deck in a 2 seeker game (rex was using the insecticist) and i really like her, for her static boost and ability. Knowing what encouter card is coming and preparing for it can save you.

Dealing with her doom:

Alyssa Graham is a great card in any kind of deck that can play cards. For 4 resources, which is not that hefty in the game and playable on turn 1, you get a action giving you all the intelligence you need for your next turn.

Without even considering that you can bury that card at the bottom of the encounter deck for a tiny Doom token, it's already good.

But what's more, you actually can bury that encounter card if you don't like it.

Her static boost is of +1 is nothing to sneeze at. Intellect boosts are always good. You want to grab clues in this game, right?

Finally, I think Alyssa really shines in a Marie Lambeau deck. Marie's ability requires that you have a doom token on one of the player cards you control. Alyssa gives you a reliable way to get that token running, from the get go. She gets Marie to a very high 5 , on par with Daisy Walker, thus solo-enabling Marie. Here is a sample (solo) deck: arkhamdb.com

banania · 347
There is one part of the analysis that I strongly disagree with: "4 resources, which is not that hefty in the game and playable on turn 1" — Alleria · 101 1/23/19
(Sorry comment got cut). 4 resources is among the most expensive cards in the game, very few cards cost 4 and more. Besides, if you play it on your first turn, it means that you are actually not playing anything else (like Shriveling, Rite of Seeking, Arcane Initiate, or Holy Rosary for example). Mystics dont really swim into money as they need expensive assets out to be useful. In other words, i don't see 4 resources to be "not that hefty" in any deck, and especially not in Mystic deck. It's actually very expensive. — Alleria · 101 1/23/19
2

In solo play her ability to foresee the future for relatively cheap makes her damningly powerful. Never again shall the mythos deck contain nasty surprises that you aren't ready for. Hell, sometimes it's even worth losing a turn if the card that threatens to come out is that bad. This effect is easily enough to justify her exorbitant costs, assuming you splurge for some ways to boost your income.

Now I think in multiplayer her role changes slightly. Sure knowing what's coming will help someone in the party survive, but it's a diminishing effect when you're pulling 4 encounter cards a turn. Here I think Alyssa is better served as a guardian angel for particularly time-sensitive weaknesses. Keep Zoey or Roland from pulling their signatures when the clock is running out, or keep watch over the person in your group who has a large pool of resources they're saving for something and a bit of a paranoia streak.

Finally the 'bonuses' of +1 books and a decent sanity body aren't too shabby either. Of course, both of our current Mystics are well equipped to deal with horror, but it doesn't hurt. Plus sometimes you just have to investigate.

Is she better than Skids? No, but she might certainly be worth charisma in solo, or if you're just not the Skids guy in multiplayer she's worth the open ally slot.

Difrakt · 1007
By skids here I of course mean Leo de Luca. — Difrakt · 1007 6/13/17
I think you can edit your own reviews (skids -> leo). — Django · 3558 6/17/17
I had the same thoughts about the diminishing effect in multiplayer, but the opposite is true. I think she is hands down THE BEST multiplayer card out there. When you play with 3 or 4 players, each player is usually specialised in one thing - statwise or combat -. The ability to (usually) competely nullify the effect of an encounter card is insane. Also you can use it as a safeguard to protect people with low sanity or health, to give them non-damaging encounter cards. — aramhorror · 530 11/14/17