You begin the game with Gate Box in play.

You may play one event each turn as if you were at a connecting location and engaged with each enemy at that location.

"The key to the Dreamlands lies within us all."
Cristi Balanescu
The Dream-Eaters #4. 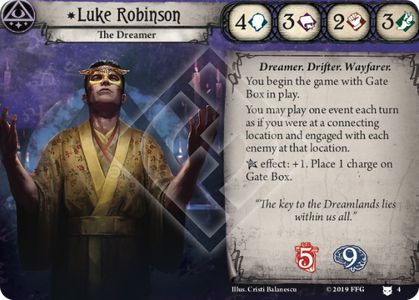 It was many years ago when Luke discovered the entrance to the Dreamlands. Through the gift of an unusual box his uncle had left him, he learned of a way to travel to and from the Gates of Sleep. He has since spent his the majority of his days wandering the land of dreams in search of adventure. From the streets of Celephaïs to the Enchanted Wood with its endless mysteries he wanders, unraveling the secrets of the land and of the myriad dreamers who reside there. Now an ancient chaos threatens to annihilate not only the waking world but the world of his dreams as well. This is something Luke cannot allow. 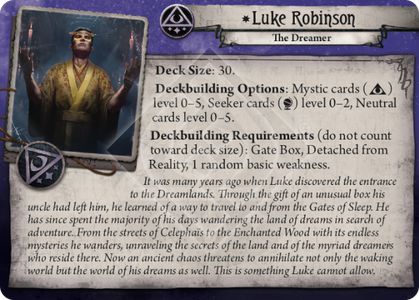 __Deck Building
Search for cards usable by this investigator
Reviews
3

I think that Luke Robinson is an interesting investigator. I'm not sure about his power level, but starting in play with such a powerful asset greatly increases his potential during the game. Gate Box essentially gives him 3 uses of Elusive which is super powerful given that Elusive costs 2 XP with the Taboo List, so he basically gets 3 uses of a 2 XP card for free. To be fair, the effect he gets is a little worse than Elusive, as it actually costs an action to move to another location, while Elusive is actionless, but if he waits until the end of his turn, he automatically moves away for free. But that's already great power level anyway, so the action cost can't even count as a disadvantage. And what's more than that, he can add even more uses to his Gate Box with Enraptured and Recharge making that asset even more powerful!

His deckbuilding options are a bit weird, but interesting. Seeker class for a 3-Intellect investigator isn't great but offers him interesting options. I think he might fall in the same category as Roland Banks when it comes to investigating, arming himself with Flashlights and Working a Hunchs and clearing low-shroud locations with regular investigations and using auto-clues for the harder stuff. He can always use Rite of Seeking and Sixth Sense of course, but if he wants to use more physical means for investigating, I think his options are kind of limited.

His ability is also interesting. I think the engagement part is mostly useful for multiplayer, but he can generally equip himself with the right events to make it count. Banish, Storm of Spirits, Drawn to the Flame and Working a Hunch make some examples of some options he can include to make use of his ability, and I think he should also lean on events heavier in order to make it more worthwhile. What's interesting here is that he can combine his ability with Gate Box. Dream-Gate is connected to every other location in play, so he can use the Gate Box to move to Dream-Gate and deal with some enemies or get some clues from any location he wants and then move to any other location he likes! I think that's super neat!

Luke Robinson's weakness is relatively mild in my opinion. With his 9 sanity, I think that the 2 horror it deals to him is a minor punishment. It can even benefit him in some situations, by letting him move to any other location he wants. I believe the worst part of it is that it can lock you down and detach you from the rest of your team for a turn and that can be very punishing in certain situations. That's, of course, assuming that he can't take a successful 6-difficulty investigate test, which I believe will be the case most of the time, but if he somehow can, he can mitigate this problem. If he runs Mr. "Rook", though, he can use this weakness to his advantage, as Mr. "Rook" will give him more control of when he draws it and possibly turn this downside into a benefit, by letting him draw it at an unimportant time and allow him to move to any other location he wants for free.

As a final note, I think De Vermis Mysteriis becomes a lot better with Luke Robinson. All those mystic spells that fight or evade can now be used against enemies at a connecting location and let you avoid the attack of opportunity that De Vermis Mysteriis would cause. Correct me if I'm wrong, but I believe that the cost is paid BEFORE the ability is initiated, which makes De Vermis Mysteriis usuable while you are at a connecting location and when you initiate the ability you can choose to use Luke Robinson's ability and play the event as if you were at a connecting location, therefore making it usuable with events that fight or evade enemies while you are not engaged with anything. And, as a bonus, his combined access to Mystic and Seeker cards gives him good options to fuel the book, making it possibly a viable choice for him.

matt88 · 987
interesting write up.. I think Barricade could be a weird janky option that could be fun. i was wondering if anyone know what would happen if you use the gate box to move to the Dream gate and then played vantage point to move a clue there. More importantly, What would happen if you failed to gain that clue. — Invisiblecam · 1 10/6/19
Nice review. Im still waiting for the ruling regarding AAOs and didnt play him but I think that starting the game with 3 slightly worse elusives is amazing. I assume that if the ruling is that Luke doesnt take AAOs he might be the best investigator in the game, even better than tabooed Rex. — Pgpgpg · 2 10/6/19
Also very very fun. — Pgpgpg · 2 10/6/19
I can confirm that Barricade is an amazing card for Luke to run. You can easily lock down a hunter's path in most scenarios, and you don't even need to evade them. Just yeet into your Dream Gate, play Barricade, and call it a day. — StyxTBeuford · 614 10/6/19
In what interpretation of the rules would Luke not take Attacks of Opportunity? (unless I’m misinterpreting what you mean by AAOs) He plays the event ‘as if he is engaged with each enemy at the location.’ If he does something that would provoke an attack from an engaged enemy, he takes the attack from an engaged enemy. Re:vantage point, when a card leaves play, all tokens and effects on it are removed, so the clue would return to the token bank. That’s bad if you needed the clue but great if you were just clearing off a VP location. — Death by Chocolate · 12 10/6/19
@Pgpgpg Thanks! Regarding Gate Box, it's a free trigger ability and it specifically states that you disengage from enemies, so I have to assume it doesn't provoke attacks of opportunity. @Death by Chocolate If you are asking me, I am assuming you re referring to the De Vermis Mysteriis part and my answer is that in order to use the Tome to play sth like Banish without getting AoOs, I am assuming that Luke isn't engaged with any enemies, but he can still play it because there is an enemy at a connecting location (using his ability). — matt88 · 987 10/6/19
@matt88 I was responding to Pgpgpg’s comment (interpreting it as about Luke using an event remotely to a space with enemies). I agree with your DVM interpretation. — Death by Chocolate · 12 10/8/19
Having played Luke a few times now I find him to be like a reverse Norman in that he may appear to be a mystic on the surface but he’s a Seeker on the inside. I’m sure it’s possible to build him as a battle mage and make full use of his ability but I’ve been riding he makes such good use of some of the less used Seeker cards he that he tends to end up a cluer. Otherworldly Compass is a must in my opinion as it helps him with his weakness and if he’s gate boxed to a high shroud location that’s an extra -1 shroud. Also just wanted to point out that if you end your turn in the dream gate you will move to a revealed location of your choice and the end of the investigation phase, therefore you can move to the dream gate, play an event such as blinding light to evade an enemy engaged with another ‘gator and end up back where you started (if so desired) or at your friends location ready to help out next turn. This method is also great for attaching short cut 2 to the location with the most traffic. — Snakesfighting · 72 10/26/19
"Just yeet into your Dream Gate, play Barricade, and call it a day." I'm not quite clear on how this would work. The barricade goes away when an investigator leaves the location. Does the end of Luke's playing of the event count as him leaving? Or does that mean the barricade stays there until an investigator enters and leaves again? — khoshekh · 1 12/24/19
He plays as if he’s at the location, but he never actually leaves that location. So Barricade does just sit there. — StyxTBeuford · 614 12/24/19
For reference this is because entering/leaving a location are directly tied to movement. Luke’s ability never implies movement. — StyxTBeuford · 614 12/24/19
Interesting. Hmm, thanks! — khoshekh · 1 12/25/19