Choose a non-Elite enemy at a revealed location up to 2 connections away. Swap places with that enemy.

"Now, for my next trick..."
Lin Hsiang
Edge of the Earth Investigator Expansion #108. 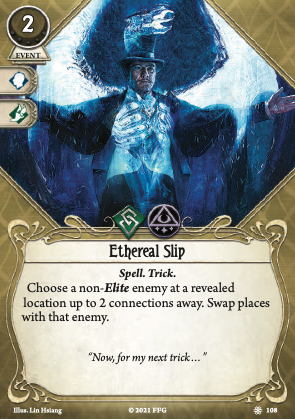 I am a bit confused. The reactions on this card seem a bit underwhelming to me. This card can solve issues you have (almost) no alternative answer to. Last scenario I helped our Rex against a Spawn of Hali being two locations away, saving the following:

Its kinda situational but with 4 Investigators there will be lot of moments for this card to shine. You could even use this card as explained above to "help" your fighter of the group, since he could fail his fight attempts or/and wants to save ammunition. Its not all about the amount of actions you need to solve an issue but the timing of those actions. When I can save my clue-gatherer with a single action (tho it costs 2 and is a handcard) I will almost always take this chance. Last but not least in hard mode you need to spend cards on your tests in 2/3 attempts anyway. So you would spend cards on the Evade vs the Enemy you could just swap with - amazing! greetings

Wachtelmann · 5
Another use case is Cultists and other Doom-adding enemies. If your teammates have the capability of taking out an enemy with Doom but they're all the way over theeeeere, you can greatly speed up the process of taking them out, potentially saving the agenda from advancing. — Maseiken · 1 5/21/22
2

This card can be used for "peeling" when you split up to gather clue a bit and an enemy spawned on investigator that can't fight. Keep 1-2 distance away then swap for disengage instead of going there and having to spend an engage action to help, which sometimes Rogue has to do.

Also sometimes enemy appears to be guarding a location. The game intended for you to defeat the enemy or have someone else keep it busy while others work on the location. Approaching that location with this card instead of walking into it, you can gain tempo advantage by not only put you at that location faster, but the enemy also must spend a turn walking back. (2 connections away can be interpreted as : It can't walk back in and whack you immediately in the upcoming enemy phase after this investigation phase.)

5argon · 1671
The note on enemies guarding a location does bring up another thought: this card is great for leaving non-hunters in places you don't intend to revisit. — Maseiken · 1 5/21/22
2

I think it's a really interesting design. How good this is depends of course on the scenarios you're playing and the number of 'gators you're running. More gators, more enemies in play at a time, yadda yadda, it becomes better in campaigns with huge maps (looking at you, Innsmouth!)

Maybe best described as Elusive in reverse, but with a bigger range (assuming the taboo list) and allows Mystics access -- and my if, true to the art with Dexter, it doesn't half let you pull some tricks! Fun to use if you pick an exhausted enemy to swap with. Get to the resign location with that big enemy on; pull aggro from other gators; just move around the map more efficiently... you're saving a move action if you pick 2 connections.

I like it. Did well in Pit of Despair when I tried it in Lily this afternoon. Looking forward to seeing if it continues to carry its weight.

I absolutely adore the concept of this card for a Luke Robinson deck with the ability to feign where "your" location is you can really lean into the team player/support role with his kit. Two is fairly pricey but you shouldn't have much problems with resources with Luke considering how many actions the Gate Box can save you. The major question I have for this card though that will effect it being either A- Bonkers awesome or B- Plain awesome is:

"Enemies and investigators other than Luke Robinson cannot enter Dream-Gate" As numerous FAQs have pointed out enemies cannot follow Luke into the Dream Gate even if he Moves out then Moves back in, if the enemy "Spawns" on Luke they are discarded, no EXP granted. (Even if it is a scenario important NPC such as the a certain Masked somebody).

So if this card is used while in the Dream-Gate onto an enemy in a connecting location is it- A. The Enemy cannot be swapped into the dream gate so the card cannot be played. B. The Enemy is Swapped with Luke into the dream gate then is discarded(not defeated). C. Luke appears at the Enemies location but the Enemy does not move as they cannot SWAP.

Grim-Rule dictates it'd be either A or C, but I am curious if someone has found an FAQ or somebody more knowledgeable than me can clarify this interaction.

Either way I am auto-including this in my 'Fellow Investigators are Chess Pieces' build.

RitsyRLZ · 2
In my opinion, Luke in Dream-Gate cannot play Ethereal Slip. First, the enemy cannot enter Dream-Gate, so that the enemy stay its location; note that the reason the spawned enemy is discarded is that it has no location to stay. Second, target rule tells that you should choose the target whose game state is changed. Since the enemy is not moved, no game state of enemy is changed. Thus, Luke cannot play Ethereal Slip in Dream-Gate. — elkeinkrad · 343 11/13/21
Note that spawned enemy at Dream-Gate is discarded since they has no location to stay. It's not Dream-Gate's ablilty. If the enemy is already at a location, the effect to forcly move the enemy to Dream-Gate does not cause the enemy to be discarded. — elkeinkrad · 343 11/13/21
My instinct is to say it's C. Enemies only get discarded by the dream-gate when they try to spawn there , because enemies with no legal location to spawn at get discarded, enemies with no spawn instructions want to spawn at the location of the investigator who drew them (so enemies that Luke draws can't spawn at the dream-gate). But when they try to move into a location where they can't go, that's a different situation. And the rules say about Hunter enemies trying to move places they can't go : "If a hunter enemy would be compelled to a location to which the move is blocked by a card ability, the enemy does not move". So thats what I think happens there: Luke can move so he does, the enemy can't move (at least to where it wants to go) so it doesn't. — bee123 · 24 11/13/21
Agreed, target rule means it's definitely A (Ethereal Slip is unplayable from the dream gate). The undefined part of the rules at the moment is whether ethereal slip counts as a move for the purpose of movement effects. — suika · 8687 11/13/21
Thank you for the clarification and where specifically to look. "Target". Thank you all for the replies! This is an awesome community :) — RitsyRLZ · 2 11/13/21
But I would say, Luke can still play the card from the Dream Gate with his "once per turn" ability. Not extremely powerful, but he could play the level 0 version for the effect of the level 2 version (still at 2 resources cost). — Susumu · 222 11/13/21
Yeah, Luke in a Dream Gate can play Ethereal Slip with his second constant ability to move any enemy to any location up to 2 connections away (taking AOO from enemies there if any) and move to that enemy's previous location, which is pretty decent. — Thatwasademo · 44 11/14/21
All revealed locations are connected to the Dream Gate, so the "up to 2 connections" restriction isn't really a limit. As long, as the enemy is on a revealed location, he can move it to any other revealed location, just like everybody with the level 2 version. — Susumu · 222 11/14/21
It's a limit on *how far you can move the enemy*. — Thatwasademo · 44 11/15/21
Oh wait, unless you mean you can count distance for the card through the Dream Gate even though the enemy can't actually move through it because it's moving directly? Huh. — Thatwasademo · 44 11/15/21
It was a brain fart from me. You are right. Since you have to move to the original location of the enemy, even though you can go to any location from the Dream Gate, it still must be two away from the enemy. — Susumu · 222 11/15/21
I don't see why you wouldn't be able to count distance through the gate. Nothing in the text suggests that the enemy would move one location at a time. You could even play this on an enemy that can't get to you at all (because all connections between the two of you are one-way). — TheNameWasTaken · 3 11/15/21
I agree with TheNameWasTaken. "Dream-Gate is connected to each other revealed location, and vice versa. Enemies and investigators other than Luke Robinson cannot enter Dream-Gate.", So technically at this point, all locations are two spaces are two away from each other (even though no one but Luke can enter the midpoint). — khoshekh · 5 12/29/21