During a skill test while fighting or investigating, exhaust Ice Pick: You get +1 skill value for this test. If you succeed, you may discard Ice Pick to have this attack deal +1 damage (if you are fighting), or to discover 1 additional clue at your location (if you are investigating). 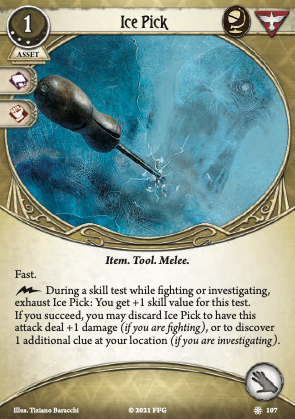 Rule Clarification: If you discard Ice Pick for additional damage or clue...

The reason of above things:

Scavenging: "after you succeed" (scavenging) is ST6, and "if you succeed" (ice pick) is ST7. Thus, you should trigger Scavenging before you discard Ice Pick. It's the same that TATA + Take Heart doesn't work.

elkeinkrad · 409
Doesn't resolve the abilities of resourceful and the discard effect of the pick during the same step (the 7th). So you couldn't recur the pick, because it should be discarded simultaneously with other cards — Tharzax · 1 12/13/21
@Tharzax They are not resolved simultaneously. The RRG says, "If there are multiple results to be applied during this step, the investigator performing the test applies those results in the order of his or her choice." So you could choose to resolve the ice pick before resourceful. — Death by Chocolate · 1251 12/13/21
@elkeinrad All three of your statements are true, but it might be helpful for you to edit your review to explain the timing nuance of why. — Death by Chocolate · 1251 12/13/21
@Death by Chocolate I add the reason below. If there is any issue or something you think to add, please tell me here. — elkeinkrad · 409 12/14/21
Thanks for the explanation. It helps a lot. — Tharzax · 1 12/14/21
Why is the "after you succeed" on scavenging considered ST6? That stage is where you *determine* success or failure, but ST8 is when the test ENDS. So wouldn't something that happens AFTER occur after the test ends? Also ST7 says, "Additionally, some other card abilities may contribute additional consequences, or modify existing consequences, at this time" so I believe, if nothing else, scavenging would active here. As you have said in other comments, if mulitples happen in St7, then the investigator chooses the order. Curious as to the thoughts of others on this interpretation. — robo224 · 1 12/16/21
Ok I apologize. In skill test resolution it does say that "after effects" apply in stage 6. So I'm wrong — robo224 · 1 12/16/21
4

The discard effect makes this an absolutely God tier card for William Yorick or any survivor who can get Scavenging or the level two version of Scavenging. Also since this is a survivor card Resourceful works also!

marmaid · 9
There is something thematically satisfying about discarding one on a test and Scavenging the other on the same test, to constantly use both ice picks one after the other. — dezzmont · 162 10/9/21
Good old Ashcan loves this in combo with his usual Duke-actions. — Krysmopompas · 298 11/4/21
3

So, I just want to add that Scavenging + Ice Pick is still a fantastic combo. The review by elkeinkrad mentions that you can't use Scavenging in the same test as you use Ice Pick for an extra clue, which is entirely correct (as Scavenging is Step 6 of the test and Ice Pick step 7), however some people seem to have misunderstood that for the two cards not working together at all.

They do, obviously, you just have to use Ice Pick and then on a subsequent test trigger the Scavenging. It takes a bit more effort, but having played this deck in "Ashcan" Pete with Granny Orne and Plucky, I can guarantee you it is the real deal. Love this card, it is the payoff the Scavenging deck needed.

Is this +scavenging really that much better than fingerprint kit, a card that isn't used that often? The costs of slot and resource per extra clue are similar. They are in different classes (though a lot of people seem excited about this combo specifically in Minh) I'll acknowledge but on pure value alone I'm not that excited. For the same XP you could even add emergency cache 3 to your fingerprint kit, another 2 card 3 XP combo that is far cheaper for your extra clues. It's also just not that easy to land scavenging every turn, especially if you play on harder difficulties.

The versatility to use it for fighting definitely makes it a lot more interesting for investigators that can use it both ways though and I'm still excited to try it in different investigators as it's just a fun card.

dubcity566 · 74
Finger print kit exhausts, Ice Pick doesn't so its more like a deduction you pay 1 resource to set up, I've done a Minh Dark Horse deck with this and it was obscene. The added flexibility of very occasionally doing +1 damage helped out too because seekers so rarely want to fight but when you do you want to be certain you get a kill. (also for high difficulty it does have the advantage of not losing its charge if you fail with it) — Zerogrim · 262 3/8/22
I think the comparison between the fingerprint kit and the pick/scavenger combo is a bit unfair even if the last one might be good. So at first you have to pay 3xp for the pick, while the kit is available right from the start. For the same amount of xp you can get better cards like the glyphs, where the clue/action ratio might be much better. Also keep in mind that the combo between the pick and scavenger needs two actions because you can't recur the pick in/after the same test where you discard it due to the timing of the reaction. So you need to be capable to trigger the condition on scavenger without the bonus from the pick. — Tharzax · 1 3/8/22
Ice pick also exhaust. But with scavenging 2 it returns to play ready, so it can be used twice in a round if you investigate 3x. Flexiblility for 2 damage is nice with mind over matter, fight or flight and similar events. — Django · 4428 3/8/22
Glyphs do have a lot of upfront power, but scavenging is such an easy way to recharge them compared to the glyphs I feel like you can keep the multiclue going for longer with less cards needed to maintain it. — Zerogrim · 262 3/8/22
The Pick is fast which is also great, burns less resources to set up (though it uses more on the long run, but there are many ways to mitigate this). Also one thing is that you never waste a pick as you can only discard it when succeeding. Finally you can scavenge it during an action when you only need one clue. Considering the flexibility, I’d say yes it’s much better. — Valentin1331 · 25205 3/8/22
These also work really well in Scavenger Minh for their combat value because she is really likely to run a lot of fist commits, as well as acid which this can buff, anyway. It is a REALLY good card if you have scavenging access. — dezzmont · 162 3/10/22
And you are able to trigger it often. So this is a good combo/item for Minh, Rex, Yorik, who all can recur the pick regularly. Also possible investigators who depend on their build are Wendy with lockpicks, Patrice with sixt sense or similar or Ash with a supported Duke. — Tharzax · 1 3/10/22
Although ice pick is equally expensive in the long run, paying in installments is much cheaper than paying 4r upfront for fingerprint kit. — yinwhite · 4 3/13/22
Because you can't scavenge back the [Ice Pick](/card/08107) you just used I made a Minh deck that uses [Fingerprint Kit](/card/05024) and [Ice Pick](/card/08107) so you can cycle between the two [Ice Pick](/card/08107)s. It also gives you a way to discard and replay to refill the [Fingerprint Kit](/card/05024) might be overkill but I am excited to try it. — White Liger · 3 3/28/22
Oops guess the card name thing does work in comments lol — White Liger · 3 3/28/22
0

A couple more synergies not mentioned so far:

I think the real combo would be to pair this along with Well-Maintained. Just infinite recursion for 1 resource, and everything is fast, right? Investigators who can take this: Joe Diamond William Yorick and of course... Lola Hayes

Correction: No infinite recursion at all, as Well-Maintained doesn't return itself to your hand

joster · 33
This is not going to work unfortunately, Well-maintained only returns the attached item and every "other" attachment, meaning well-maintained itself will still be discarded — niklas1meyer · 1 2/13/22
As soon as I wrote the review I realised that Well-Maintained doesn't return to your hand... — joster · 33 2/13/22
Turning Well Maintained into a vicious blow/deducation still a neat use here. — Zerogrim · 262 2/13/22