After an investigator at your location draws 1 or more cards from their deck during the investigation phase: That investigator draws 1 card. (Limit once per round.)

"I have experience dealing with these sorts of horrors."
Aleksander Karcz
Harvey Walters #1. 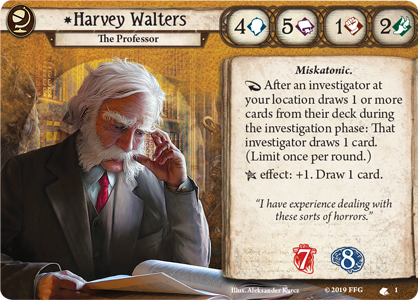 Professor Walters began as a devotee of the archaic and obscure, but over the years he has discovered that his knowledge of ancient languages, profane relics, and strange rituals is vital to addressing dangers in the modern day. He is both an avid collector of prehistoric ephemera and a fount of knowledge regarding the bizarre primordial religions that worshipped nightmarish gods eons ago. There is perhaps no sane person alive who knows more about the occult than Harvey. When a supernatural event occurs, Professor Walters brings his considerable resources and experience to bear.
__Deck Building
Search for cards usable by this investigator
Reviews
6

Disclaimer: I haven't gotten to play Harvey yet, so the following is speculative theory.

I am personally VERY skeptical about Harvey's value for biggest-hand seeker. Having 9 or more cards in hand when he draws his signature weakness will hurt a LOT, and if you go all in on draw, you will likely hit it a couple times. Many of his starting cards and upgrades suggest you should be aiming for a 11+, 12+, or even 15+ card hand, and I think they're an absolute trap for him. There are certainly tricks around it, such as using Mr. "Rook" to bait it out when you have 8 or fewer cards, but in general, I believe he has much better and less dangerous uses for his abilities if you still want to lean into his abilities as an unstoppable draw engine. Here I suggest three options:

Farseer Harvey (hand size 6-8) The biggest hand Harvey that I recommend should aim for the sweet spot of hovering around 6-8 cards, for the spicy Seeker ritual, Farsight. There are many general events that you can happily toss out one or two a turn as free actions that you might not be running in another seeker deck because they don't 'give enough value on their own' for their deck slot. Harvey's 5 means that he can get by on raw investigation tests throughout the scenario, and cheep investigate action events such as Burning the Midnight Oil or Seeking Answers, where most of the 'cost' is the action they take, become the workhorse pieces. Economy from Emergency Cache or Cryptic Writings (even if you draw it out of turn) are easy to slip in. Conditional emergency cards such as Occult Invocation, "I've got a plan!", or Logical Reasoning can comfortably sit in your hand until they're needed. Even Guidance seems pretty sweet when you don't have to pay an action for it. Generally you should expect to draw 3 cards per round (1 in the upkeep and 2 in the investigation phase, ideally from triggering Vault of Knowledge and your ability, so you can get it as an incidental to investigating and just keep trucking. An ideal turn looks like - draw to 8 with upkeep, during your turn, Farsight at the start, investigate to draw back and then use the other Farsight. You can be less paranoid once you've passed Thrice-Damned Curiosity, and there is still a lot of flexibility.

Support Harvey (hand size 4-5) Like Minh, both Harvey's ability and his signature can be used on your allies. Unlike Minh, Harvey doesn't actually need that much help himself. With just a Magnifying Glass, or any other bonus, he can gleefully investigate away, succeeding on -3 for Shroud 3 locations. Old Book of Lore is another fantastic support card that also synergizes with his ability and can pair nicely with the grossly overqualified intern or the derby-rocking badass or both! Crack the Case or Charles Ross, Esq. can help them pay for all the cards you give them. You'll be fairly self sufficient, and really give your team-mates some serious boosts (especially with the insane value compression of New Book of Lore all while hovering around an irrelevant but middling number of cards. Keep some options, but only take 1 damage at some point. Whatever.

Harvey Goes Brrr (hand size 0-3) Okay, this one may not be the best. It's almost certainly not. But it's definitely my favorite. Just lean all into the gas. CHURN through your deck. Almost every card in the deck should draw cards and/or is fast so you can tear through again and again, playing cards as quickly as you draw them. The engine itself is Abigail Foreman holding an Old Book of Lore. Yeah, you're spending an action each turn to use the book (except when you don't), but that's giving you two searches, and your bonus. That's 3 cards, plus a Surprising Find and/or Surprised Rabbi you stumble across in your reading. Add that to the card you're drawing in upkeep and another expected off of Vault of Knowledge - because you should be investigating once or twice every turn with this deck. The Cryptic Writings play themselves, and other assets will just jump out of your hands. Between spin-cycling your deck and Practice Makes Perfect, the Deductions will easily make back your actions spent reading. Any build-up of accidentally drawn can be easily vented by pitching to your own or allies' investigation actions, or burned into your foes. Best of all, Thrice-Damned Curiosity will become literally the softest weakness in the game - often dealing 0 damage and discarding itself!

My man Harvey, finally! The OG of the Arkham universe, ever since his first appearance as a journalist (and eventual Prof) in the original Call of Cthulhu days at Chaosium. Was initially hoping for more of a Norman Withers vibe here, starting as a scholar and ending up as a bad-a** mystic, but this is a very solid, uncompromising seeker who helps pretty much anyone who he comes in contact with. For card draw and surfing through decks, I'd take a course with him anytime. Will consider a real review once we see the cards included in his pack, but for now just have to say, finally good to see you again old friend.

Krysmopompas · 37
In agreement, it's cool to see Harvey still kicking around. I'm enough of a dweeb to be amused that Harvey's got a commendable base Will of 4 when in the character creation walkthrough he was noteworthy (and indeed NAMED, Walters rhymed with "Falters") for his awful POW stat therefore his incredibly low Sanity. — Omnicrom · 1 3/28/20
Ha! Good point on that low POW - oh how our Harvey has grown. — Krysmopompas · 37 3/28/20
2

There’s a reason the individually packaged investigators can only take their color and neutral cards… Because they’re amazing at what they do. Harvey is the epitome of the big hand seeker, with almost every card he can get either helping him gain cards or helping his hand size, or taking advantage and discarding cards for effect. The man is a mobile library, and while you could play him with magnifying glasses and Hawk Eye cameras, he’s designed for books. Piles and piles of books. Celaeno fragments, forbidden Tomes, Occult Lexicons...

What separates Harvey From Daisy or Norman, however, is that he works extremely well with teammates. His ability can trigger off of others. He can gift cards with his signature card while doing actions he already wants to do, or simply be around while Winnifred or Nathaniel handle their business. It’s important to have focus characters you can give to a new player, and if they are playing Professor Harvey, they are going to be able to have fun and contribute to the game.

MrGoldbee · 180
What REALLY seperates Harvey from Norman is his ability to take Seeker cards above level 0! :P — Death by Chocolate · 402 8/29/20
Did I read his ability correctly? Because it does not say group limit per round, if there are 4 investigators in Harvey's location, are all able to draw 1 card? — Lettucefolk · 1 9/18/20
@Lettucefolk, you couldn't trigger it multiple times for different investigators because, while it can be used to make other investigators draw, it's still being triggered by Harvey's controlling player, and the limit applies to that player. — Simonandduncan · 1 10/10/20