Gain 3 resources (4 resources instead if you have 10 or more other cards in hand).

After you draw Cryptic Writings during your turn: Play it.

"...these are few as compared with those in the languages I cannot understand." - H. P. Lovecraft, "The Statement of Randolph Carter"
Anna Christenson
Harvey Walters #24. 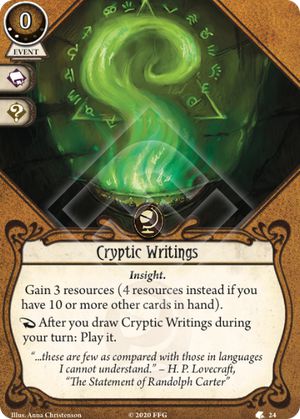 This is very nice, but mostly in Big Hand decks. Harvey probably finds the XP worth it, but I think a lot of other investigators prefer the Level-0 version, unless they find themselves with XP to burn.

On editing (mysteriously, fixing a display error took me under 200 characters): The Reaction ability is a pretty interesting mechanic (as opposed, say, to just making the card Fast), and very thematic for Harvey or any other Big Draw investigator. It's very rare an investigator wouldn't want to get 2-4 resources during their turn, but are their other actions where this would be fun or interesting? Probably not Fight or Evade, but maybe a card that triggers an Investigation, Draw, or Play?

LivefromBenefitSt · 927
Disagree, this is just pure gravy in any deck that has lots of draw, not just big hand, which is basically any Seeker and will definitely include the Rogue 5, Seeker 2 Trish Scarborough. Lucky Cig Case and All In plus this = perfect engine. — StyxTBeuford · 12738 9/7/20
That's assuming that XP ois infinite. 2 XP gets a lot of great stuff in every class, so you want to make sure you are landing 4 resources every time. There are plenty of Seekers who end uo with fairly thin hands. — LivefromBenefitSt · 927 9/7/20
2XP to effectively thin your deck by a card and 3 resources you otherwise wouldnt (actionless!) is ridiculously powerful. I think if you reliably trigger the original, you take the upgrade every time. — StyxTBeuford · 12738 9/7/20
I dunno; do most investigators prefer this to, say, the upgraded version of Deduction? Maybe if you play Solo all the time.... — LivefromBenefitSt · 927 9/7/20
I dont understand why the two are at odds. Deduction 2 is probably taken before this in 3-4 player, probably not 2 and def not 1. — StyxTBeuford · 12738 9/8/20
I think the conflict is with Crack the Case, which is pretty easy for most Seekers to pull off for at least 3 resources and never costs an action. This costs 2 XP and runs the risk of being drawn during upkeep or post-mulligan, turning into an Emergency Cache or couple of icons. I think it's a bit terrible at 2 XP, really. — housh · 141 9/11/20
I'm actually mistaken in thinking it thins your deck since you still draw it instead of another card, so it's not like Astounding Rev. You're right, CtC competes really heavily with this. Still I think a very strong card and worth looking at if CtC gets taboo'd or if you need more resources. — StyxTBeuford · 12738 9/11/20
0