After you draw Cryptic Writings during your turn: Play it.

"...these are few as compared with those in languages I cannot understand." - H. P. Lovecraft, "The Statement of Randolph Carter"
Anna Christenson
Harvey Walters #15. 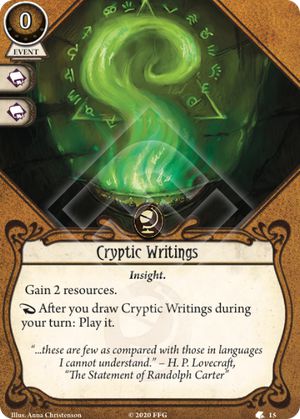 You're just never going to draw it during your turn.

Finding it is nice, but most of the time you will just feel bad and annoyed. It's not important enough to try and search for it with search effects. And the rest of the time it's just a bad Emergency Cache and you'll be cursing it in anger!

The card is quite decent in Norman Withers decks, and I could imagine it in a deck with Scroll of Secrets.

Tsuruki23 · 1916
Heavy disagree. If you build your deck to cycle quickly, you will frequently draw this during your turn. Even Crack the Case require you actually clear a location to get the burst. This is just gas in a draw heavy deck. — StyxTBeuford · 12387 10/6/20
Yeah, a typical draw-heavy deck will draw 2x, 3x, or even 6+x as many cards during their turn as during the upkeep. — Death by Chocolate · 639 10/6/20
And at worst, you've got 2 int symbols, the best non wild symbols to have in the game. It hurts less than accidentally drawing Astounding Rev, which you should still run despite that risk in a search deck. — StyxTBeuford · 12387 10/6/20
I agree with Styx. Harvey with his Vault of Knowledge out has got great odds of drawing this during his turn. If it's early in the game, you'll be glad to have the resources. If it's mid to late game, those icons are beautiful. A great card either way. — Pinchers · 4 1/8/21
@Death by Chocolate, can you link me a deck that draws 6 cards every turn? Curious. — flamebreak · 17 2/3/21
@flamebreak simple example: any Seeker investigates commiting PMP, drawing Perception (2), exhausting Gristly Totem, passing, gaining +4 cards in a single skill test; investigating again commiting the Perception, gaining +2 cards. Exhausts a Taboo'd Scroll for +1 draw. Exhausts Rook for +1 draw. Exhausts Dream-Enhancing Serum for +1 draw. Plays Cryptic Writings for +3 more. Spend 6 secrets from the Necronomican for 6 more cards. Of course, this will be spread out in a few turns to avoid running into the hand size limit...or you might not care becuase you have the Dream Enhancing Sereum in play. — suika · 7374 2/15/21
0

It's a nice adjunct to/replacement for Burning the Midnight Oil. Rather than being 2 Resources for something you would probably be doing anyway, this is fast in a different way. I guess it would not fire if Minh Thi Phan recurred it from her discard pile with Scrounge for Supplies, but why would she do that? NOt flashy, but a nice utility card, especially since Seekers often need to spend resources on Assets to really get going. This might also help Roland Banks with his perennial resource problems.

LivefromBenefitSt · 549
Does Roland draw cards during his turn? Maybe with the new "Draw 2 cards after you defeat an enemy" card — Yenreb · 9 9/8/20
Yeah I dont see how Roland justifies this. Astounding Rev works much better thanks to the Stick to the Plan interaction, though it also works great with Practice Makes Perfect and Calling in Favors. — StyxTBeuford · 12387 9/8/20