Exhaust Scroll of Secrets and spend 1 secret: Look at the bottom 3 cards of any investigator's deck or the encounter deck. You may discard 1 of those cards. You may add 1 of those cards to its owner's hand. Place the rest of those cards on either the top or bottom of their deck, in any order.

Matthew Cowdery
For the Greater Good #188. 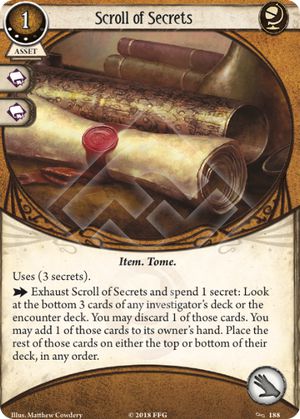 With the 10/15/2020 taboo giving this card icon to activate instead of , the whole cycle is quite a bit more likely to see play.

Truth be told, this much was obvious. But I want to touch on a particular interaction that the Scroll of Secrets has going for it:

It can bury weaknesses in investigator's decks.

Now I don't necessarily mean "if you happen to hit an investigator's weakness in the bottom three, you get to punt it into their discard pile." No, what I mean is "My sick-nasty Winifred Habbamock deck happened to draw Doomed as her basic weakness, while our Rex Murphy player drew Offer You Cannot Refuse and I hate it."

Enter, Scroll of Secrets. Not ONLY do you have the option to dropkick these weaknesses into the Shadow Realm, you ALSO have the ability to effectively negate them by always choosing to put any player cards from the bottom of the deck to the top. In doing so, you end up 'pushing' any weaknesses not drawn closer to the bottom of the deck and away from the top, regardless of whether or not they're necessarily relevant to the scenario at hand. Because if it means you get another scenario out of your 30XP character who is waiting for The Bell Tolls, it's worth it.

Now I just need to convince our Rex player to pick up the second one so I don't hear that damn bell.

TL;DR interesting corner case in flipping cards from the bottom of your deck to the top to avoid being Doomed.

DanPyre · 33
With 3 secrets you can check the last 9 cards of your deck, which may not be enough to find the card in question. So if you always put the 3 cards you checked on top, you can delay drawing unknown cards for about 9 turns. Or add more secrets to the scroll by truth from fiction, eldritch sophist, astounding revelation (though the scroll does not search, it looks),... — Django · 3165 10/27/20
Yup! I didn't bother with the actual math, but if you wanted to actually get a card each time you'd 'draw' 3 and put 6 on top which isn't bad at all. — DanPyre · 33 10/27/20
I played Scroll of Secrets (0) with Ursula this weekend and twice in one scenario she found Leo's weaknesses (29XP standalone so 4 total weakness in the deck). It isn't a natural fit for Ursula but the card is so good after Taboo that most Seekers will use it. Or at least they should. — TWWaterfalls · 703 10/27/20
...Until you shuffle. — MrGoldbee · 586 10/27/20
I don't think you can ever voluntarily discard a weakness, right? So you can't target it with the "discard 1 of those cards" portion of the effect. Your point about burying them by bringing other cards to the top still stands. — FarCryFromHuman · 1 10/27/20
You can't choose to discard a weakness from hand. Discarding from anywhere else is fair game. — TheNameWasTaken · 3 10/27/20
"A player may not optionally choose to discard a weakness card from hand, unless a card explicitly specifies otherwise." You are correct! Thanks! — FarCryFromHuman · 1 10/28/20
Minh could also discard it with Magnifying Glass (1), then Scavenge it. — Zinjanthropus · 155 11/10/20
13

So the 2020 Taboo has been very kind to this card. I've been playing this card in Minh with Scavenging and Charles Ross, Esq.. Free draws that are super easy to recur at 0 cost because of Charles Ross and because Minh can investigate so well with Scavenging. Heheheheh enjoy the combos!

It's fantastic for discarding out weaknesses, discard-synergy cards like Miss Doyle's trikitty, Winging It, items to be scavenged, Yaotl. You name it! Love the new card. It's absolutely a seeker staple for those who have the hand-slot. Even the mystics who have very uncontested hand slots should love the lvl 0 version!

chirubime · 2879
Yes, the L0 card is now playable and the L3 card is really good. It not only looks at a card for an investigator but it also places it into their hand saving an action. The kicker though is the straight up discard of the weakness. So many Mystics have awful signature weaknesses that they would like to get rid of. Or combo it with the Summoned Hound or other bonded card with a weakness. Nice to see the taboo list making some less interesting cards interesting again. — TWWaterfalls · 703 10/20/20
11

We've known what this card's effect was going to be for a little while, and it feels like maybe as a result its slipped under people's radar a little with all the exciting new cards being revealed.

I tend to like to evaluate cards in the context of existing cards that do similar things, or at least fill the same role. In the case of Scroll of Secrets I feel that it kind of demands a comparison to the core set's Old Book of Lore. Both are seeker tomes taking up a hand slot, both give you an action that lets you look at 3 cards and draw 1.

However, Scroll of Secrets costs 3xp to the OBoL's 0, and only has limited uses at that. To make up for these downsides, it costs two fewer resources and gains some pretty interesting additional utility. It's pretty unlikely that most people would consider a 2 resource discount to be worth limiting the uses to 3 and upping the level to 3, so we have to look at what benefits the particulars of the cards effect bring.

First of all, the OBoL lets you choose one card from the three and then shuffles the other two back. The Scroll lets you make a few more choices. It allows you to choose to discard one of the three cards, this lets you get rid of a weakness or a card you dont want to see this scenario. Or even, for example, discard an Insight card to hit with Eidetic Memory. Additionally, the scroll lets you put the card you dont draw or discard back on the top or bottom of the deck. This means that if you see two cards you want, you dont have to shuffle one away. You can draw one now and put the other on top to draw at the end of turn. Putting a card of your choice on top also allows you to dodge drawing a weakness for that turn. I think the power of this effect shouldn't be underestimated, allowing you to actually start to thin out your deck and control what cards you are going to draw is a huge benefit over what is essentially just an upgraded draw action on Old Book of Lore. The power of this effect also clearly justifies the limited uses, otherwise you would be able to delay drawing a weakness indefinitely.

The second option that the Scroll of Secrets provides you is the ability to use it on the encounter deck. This acts similarly to the much maligned Scrying, only with similar benefits to those outlined above. If you see a card you really dont want to deal with such as Ancient Evils you can just get rid of it. It also lets you place a non-enemy card on top, which in solo could be a huge benefit. I think this mode is significantly weaker than using it on an investigator deck however, since in Solo you are unlikely to have the actions to be using this when you most need it (ie when you're already engaged with an enemy or dealing with a tough treachery). While in multiplayer you are only changing the encounter drawn by a single player which is only marginally beneficial in the best case. It is always nice to have this option though.

In terms of investigators, this is obviously good for Daisy Walker for all the same reasons Old Book of Lore is. Given how core that card is to her general strategy, I feel that this would be worth it even if it was just a third or fourth copy to improve her odds of drawing it. As it is, having all the benefits that I outlined above I think this card fills it's own niche in the deck and provides a lot of new potential power. For other investigators I do think this starts to look a little less appealing, Minh Thi Phan already draws enough cards that she doesn't benefit much from an upgraded draw action once per turn. Ursula Downs is good enough at both investigating and dealing with enemies that she can usually profitably use all her actions as it is, similarly for Joe Diamond. I think Rex Murphy is the only other investigator who I might consider taking this in, if only for the fact that it lets you actually get rid of his weakness for good.

It's worth mentioning this does synergize with Enraptured and Truth from Fiction, if the limited uses are getting you down.

Overall, I think this another solid addition to Daisy's library, and an interesting niche pick for investigators that are worried about drawing their weakness.

birdfriender · 195
Excellent review for what I consider an excellent card. You didn't overly touch on the fact that you don't have to use it on your own deck, nor do you have to be at the same location as the target. This is a great way to spread the card draw love around, and add a little more support to Daisy. — cb42 · 26 5/15/19
I actually didnt pick up on the fact that you dont have to be at their location, that's a huge upside that I hadn't considered. — birdfriender · 195 5/15/19
Quick question: does this count as a "draw" for the purposes of Ancient Stone: Knowledge of the Elders, by the way? It doesn't use that language, but Old Book of Lore does — Malgox · 17 5/28/19
You’ve answered your own question. OBL involves drawing a card (because it says a draw occurs) and SoS does not (because it never says a draw occurs). — Death by Chocolate · 581 6/3/19
If Daisy already has better books in play, this combines really well with Knowledge is Power. After you select one card from the bottom three, you can put the rest on top and Knowledge is Power then gives you a free draw, handing you one of the two cards you didn't pick as well! — Dissonant Whispers · 16 4/25/20