Play only if there is a clue on your location.
Place 2 secrets on an asset you control.

“How do you know I’m mad?” said Alice.
“You must be,” said the Cat, “or you wouldn’t have come here.”
- Lewis Carroll, Alice’s Adventures in Wonderland
Maggie Ivy
The Boundary Beyond #152. 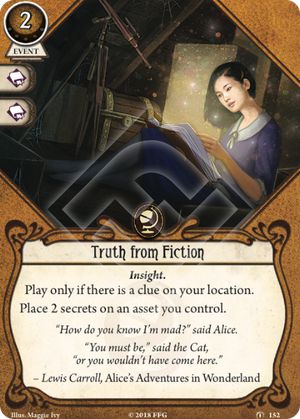 So as of the end of the Forgotten Age cycle there are 6 assets that have Uses (Secrets), though strictly speaking this doesn't actually have to put secrets on a card that can use them I cant think of a reason why you would want to. Of those 6 cards, one of them is a Forbidden Knowledge, which Daisy, Rex, Jim or Norman Withers could play, but spending 2 resources and an action to put two secrets on Forbidden Knowledge to let you spend 2 horror to get 2 resources back seems.... bad. Unfortunately this won't let you refuel it for a friendly Agnes as you have to choose an asset you control.

As for the in faction cards, both versions of upgraded Ancient Stone can be restocked with this. Using two resources and an action to heal two horror, divided amongst investigators and assets, makes Truth from Fiction behave kind of like a better Emergency Aid for horror which is definitely not bad, especially in Carolyn Fern. However, I think a much better use is to combine it with the damage variant, letting you bank two testless damage for a later turn. Just dealt with an enemy on your space that was keeping you from investigating, but used up the last of your ancient stone pings while doing so? Fear not, instead of spending an action investigating right now you can hedge against the encounter deck by reading a children's book. I would say that how good a strategy this is largely depends on how high a number you noted for your ancient stone translation, the greater the number of secrets you start with the less useful a 2 secret recharge will be for you. I dont think this is worth running if you're planning to go for some Double or Nothing 14 secret ancient stone shenanigans, but if you get put in a bad spot and have to note down 5 or so secrets you might look at this as an option.

Another interesting use is In the Know, if you set up camp on a low shroud location and leave a clue there, you can keep using it to save your movements and recharge it with Truth from Fiction, provided a teammate can run around revealing locations and keeping monsters off you. Combined with Disc of Itzamna, Scavenging, Hiding Spot and Analytical Mind out of Minh Thi Phan and you could have a fun deck concept.

Finally, and possibly the most powerful use of this card is the new 5xp Seeker card from Shattered Aeons, Pnakotic Manuscripts. It enters play with only 3 secrets so one copy of Truth from Fiction can nearly double the number of uses you can get from it. Given that each use of it is somewhere between a Ward of Protection and a Will to Survive, doubling up on that is extremely powerful and I think we may see a lot of Seekers, especially in 3 and 4 player games, look into combining these two cards. I do think this is worse in solo or in two player, as actions are generally more pressured at lower player counts and its harder to justify taking the action off investigating to play this, though I still think it will be worth it more often than not.

The biggest downside of all of these strategies is that all of the powerful assets that use secrets cost experience, which means either you are spending exp on swapping this in later in the game or you are putting a dead card in your deck for the first few scenarios. The double books on this card help to mitigate its uselessness in the latter situation somewhat but there isn't a shortage of double int cards with useful effects anymore.

birdfriender · 217
It’s not useless in a 0xp deck if you are using it to quickly complete a level 0 Archaic Glyphs! One question though, why do you specify camping on a low shroud location with In the Know? ItK doesn’t care about the shroud on your current location. — Death by Chocolate · 1251 11/17/18
Excuse me but where exactly can you see the new cards from the pack?? Can you post a link?? — matt88 · 2656 11/18/18
That's a good point about Archaic Glyphs. As for the low shroud location, you dont have to be on a low shroud location, but Truth from Fiction requires a clue on your location. The idea is that you can just leave a clue on a 2 or 3 shroud location to turn TfF on and then be able to reliable scoop it up when you need to move on. — birdfriender · 217 11/23/18
I can confirm, using this on Pnakotic Manuscripts is amazing. On of the guys in our playgroup was using this with Daisy, and he did great things with it during both games. You can also use it for it's icons (he did once). Two intellect icons aren't the most useful thing in the world for Daisy — Schielman · 31 1/6/19
Don’t forget every greedy Seeker’s best friend: Mr Rook — PanicMoon · 2 7/22/20
Works with the new Necronomicon too but I'm not sure how valuable it is for that. Compares decently with the riskier Recharge when you have powerful secret cards — Timlagor · 4 8/29/20