: Investigate. Your location gets +3 shroud for this investigation. If you succeed, discover 1 additional clue at your location, discard Ancient Stone, and record in your Campaign Log that "you have identified the stone." Next to this, in parentheses, record the difficulty of this skill test. 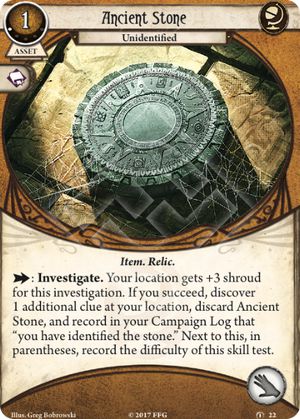 I haven’t had a chance to do this yet, and of course we don’t know what it turns into at the time of this review, but screw it. Go big or go home! This card’s effect records the ‘difficulty’ of the test, not the shroud, which means that Double or Nothing substantially increases this number. (It also records the result twice, although I doubt that will matter.) This means on a shroud 4 location (the highest number you reliably see in scenarios), you can record a whopping 14! The only challenge that leaves is having to actually pass a (14) test. And you have to do it honestly too, as autosuccess effects won’t do you any good since automatic success treat the difficulty as if it were 0 - which is a pretty depressing number to record! No, we need to commit a handful of skills. Or just use Higher Education and call it a day because that card is fair... Plus you get to discover 4 clues in the same action, which ain’t too shabby!

Death by Chocolate · 640
Green Room from Curtain Call has 5 shroud and Another Dimension from Lost in Time and Space has 6 shroud... :) — KptMarchewa · 1 7/3/18
To address the previous commenter: I'd like to point out that when you're playing Lost in Time and Space it doesn't often matter what you're recording in your campaign log considering it's the final scenario. — Swekyde · 48 11/26/18
But are there any investigators that can both use the Ancient Stone and get Double or Nothing? - Rex could have been the one if it was not for his curse — tdctaz · 40 4/28/19
There are also Treachery cards that increase shroud — Timlagor · 1 8/27/20
@KptMarchewa Unfortunately Curtain call is the first scenario (and Ancient Stone costs xp), so it isn't available yet, and Lost in Time and Space is the last in a campaign so you won't get to benefit from it. @tdctaz That doesn't really matter since another investigator can bring Double or Nothing and commit it for you! @Timlagor that's a great point, although hard to line up. Rex or Minh can bring a copy or two of Drawing Thin to up it as well now. — Death by Chocolate · 640 8/28/20
4

I think this card is probably most comparable to Strange Solution. Both require one action to use and some form of test. (Strange Solution has the test built into the card itself, while Ancient Stone requires an investigate action (which is not always a test but usually is)). However, Ancient Stone is much more difficult to use because:

However, if you can pull off the early legwork to get this going, a properly-researched Ancient Stone can be upgraded into some really powerful tools. With a lot of secrets on it, Ancient Stone (Heart of the Elders) can deal a lot of testless damage to monsters, which is amazing in this game. Ancient Stone (Minds In Harmony) is also one of the most efficient ways of healing horror in the game, which makes it a great option for Carolyn Fern (particularly if she has Shrewd Analysis).

There's been some discussion around using Double or Nothing to create an absurdly high skill test. While this is fine, Rogue cards and Seeker cards rarely show up together for the same investigator, so that can take some coordination and it might not be worth the extra effort, since the stars really have to align. However, I have found some success in using 2 copies of Drawing Thin to increase the difficulty by 4, which is still a sizeable amount. Drawing Thin is useable by Minh Thi Phan and Rex Murphy - two investigators that can get a lot of use out of the Ancient Stone - so I think there's good combo potential there. That's to say nothing about how Drawing Thin lets you draw cards before a skill test when you activate it, which means it will be useful even after you use it to boost up the Ancient Stone test number.

Overall, while this is a tough card to play and get set up, I think it is probably worth the investment. I think the new Drawing Thin makes it a lot better, particularly if you are also running Higher Education in non-Taboo scenarios.

ArkhamInvestigator · 241
Technically the test is built into the card for Ancient Stone too, but there are some location effects which may cause it to not be an Int test. — Death by Chocolate · 640 7/3/19
Before the Taboo list it was relatively easy to pull the Double or Nothing combo with Higher Education, atleast in multiplayer. I used to get the stones with 14-16 secrets after the 3rd scenario of a campaign. Since now Higher Ed costs 8 XP you can't pull this off so easily. Now I am satisfied with 12 secrets and I usuallly get it after the 4th scenario and without using Higher Ed. I think the nerfing of Higher Ed and indirect nerf to the stones is good, since having this with 16 secrets after the 3rd scenario was OP. — Alogon · 620 7/3/19
2

With the increasing amount of card draw in , both upgrades to the stone can be used more consistently and both of them have very powerful effects. Some examples:

All this requires a lot of secrets on the stones (yes you could have 2 in play for double the fun). There's also a few cards that add secrets like Astounding Revelation, Truth from Fiction and Enraptured, but i think they are very inefficient. It's much more effective to increase the difficulty as much as possible when identifying the stone and later replaying it, when it's secrets are used up. After all, card draw also has the advantage of going through your deck more than once, if you're not afraid of your weaknesses.

I wonder why no one mentioned this before, but enter Versatile. I think draw and tutoring effects more than make up for the increased deck size. Use 2 of them to add 1x Double or Nothing and 1x Drawing Thin to your deck. If you use both on a shroud 4 location, the difficulty will be 18, resulting in the same amount of secrets:

You might wonder how you could possibly beat that. If you got 1 xp left, take Three Aces or ask your mystic for Seal of the Elder Sign. Otherwise the best strategy I've found, have Mr. "Rook" look for Drawing Thin early and always take 2 ressources when possible, mostly on low shroud locations or encounter cards you're likely to fail anyway (but please don't increase the amount of horror from cards such as Rotting Remains). That should get you enough so you can resolve the stone mid or late game with Hyperawareness or similar cards, also netting you 4 clues. If you draw you won't be able to pull that off during the same scenario again. So asking your mystic to get Time Warp and keeping it for this test would be a good idea.

Alternatively your could pass the stone, maybe Mr. "Rook" and all of the groups ressources to the survivor with 2 Drawing Thin, while the commits his Double or Nothing. The should have Plucky to use the ressources. He could also use Mr. "Rook" to search for missing Drawing Thin or Plucky. So you'd get 22 shroud/ secrets on the stone.

In case your group has no or , use versatile to get missing cards or Teamwork, if there's no .