After you commit a card to a skill test, exhaust Grisly Totem: That card gains another instance of one of its skill icons of your choice. If that skill test is successful, the performing investigator draws 1 card.

We should have thrown it back immediately.
But how could we have known?
Ethan Patrick Harris
For the Greater Good #194. 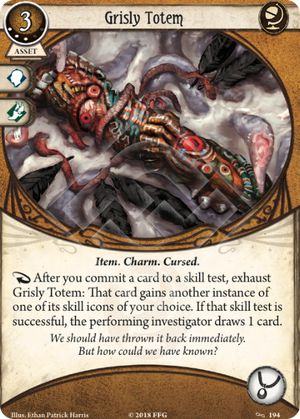 The totem gets better with any upgrade of Dream Diary, as it gives the equivalent of Unexpected Courage or better for free each turn. This fixes seekers (who are not minh) problem that they don't have cards to commit for the totem every turn.

Combining that with Dream-Enhancing Serum means you can hold on the first copy of other cards for longer, having a bigger chance of triggering the serums reaction. The totems draw effect also makes it more likely to trigger the serums draw.

In total these assets are pretty expansive ressource wise. So you should also facter in some economy cards like Emergency Cache, Crack the Case or Astounding Revelation (if you have search effects).

I think a lot of people were overly negative on the level 0 version of this card, which I felt was fairly powerful if not game changing. I think, on the contrary, most people are in agreement that both upgrades to it are strong additions to their respective factions.

In the best case scenario this card draws you an extra card each turn, while giving you +1 to one skill test. This is a reasonably powerful effect, though it comes at the cost of 3xp, 3 resources and an accessory slot. If Grisly Totem always maanaged to deliver on this potential it would be a reasonable if somewhat unexciting spend of 3xp. However, in order to get this effect you have to be comitting a card to a skill test every turn and on top of that you have to pass that skill test. Now, the Totem does help you to pass the skill test so its not overly likely you'll fail and miss out on the card draw, but there's always the . Needing to commit a card every turn however is a little more of a restriction, though the card draw Grisly Totem provides can help to fuel itself in this regard.

Now that is the best case scenario. If you dont draw this in your opening hand then suddenly its looking a lot worse. The big question really is, how many cards do you need to draw for 3 resources and 3xp for it to be worth it? And then, how early does this need to be in play for that to regularly happen. To compare, for 2xp you could include Preposterous Sketches which will draw you a guaranteed 3 cards for 0 resources, no matter when in the game you draw it. So how many cards does the Grisly Totem need to draw on average to be worth an extra 3 resources and an xp? To simplify, lets say that the extra experience and the plus one to a skill test cancel out. So the question is how many cards is 3 resources worth? I feel like a reasonable heuristic would be 2, in line with Emergency Cache. So to recap, we have to regularly be drawing 5 cards per game with the Grisly Totem before its beating Preposterous Sketches for efficiency. If we figure that we're likely to pass 75% of the tests we use this on, that means we have to have this in play for about 7 turns for it to be the better option. Which doesnt seem too tall an ask, though the later you play it the more you are likely risking by doing so.

For a brief aside, I do think this card bears comparison to the fairly medium Tooth of Eztli. Both provide you with bonuses to skill tests, and both reward you with a card draw once per turn for passing them. They both costs 3 and they both take an accessory slot. Now, you have more control over when Grisly Totem triggers, as you can use it on any skill test and not just encounter cards. However, you do need to commit a card to the test so you may not even be netting a card necessarily, whereas Tooth of Eztli only asks you to pass tests you would have to take anyway. I'm not saying that I think Tooth of Eztli is better, but it is 3 fewer xp and fills a similar role, so it bears considering.

All of this adds up to a card that sounds pretty okay, if not hugely exciting. But that's in a vacuum. What are the situations where this card over-performs? Well I think a big thing to consider with Grisly Totem is that since you are adding both a skill icon and a card draw to a test, its going to stack up well with other cards that are relying on you passing big tests. For example, applying this to Deduction isn't just giving you a card draw, its also improving your chances of getting the succeed by two effect on Deduction. In a similar vein, I think if you have a teammate who is using Double or Nothing then you can really help them out with Grisly Totem.

Another case where this card might shine is in a more support focused build. While has a lot of card draw options, the class is definitely a lot lighter on ways to help out other investigators with drawing cards. I think trying to leverage the ability to add card draws to other people's tests could be a fun way to build with this card, particularly if you are co-ordinating with your team on deckbuilding and you know one of your allies is going to be struggling for card draw.

All that said, this does all come with the caveat that you are able to keep committing cards to skill tests. This somewhat limits the usefulness of this card to investigators who already want to be proactively committing cards to their tests. This makes the most obvious use case, by far, Minh Thi Phan. Minh meets the criteria of wanting to proactively commit cards to skill tests, it also stacks with her Analytical Mind to allow her to draw multiple cards per test. Minh is also already incentivized to stack up test rewards in order to best take advantage of her ability, which is a playstyle thats get stronger the more ways you have to stack those benefits up. Outside of Minh, I'm not convinced this is a high priority upgrade. Its biggest advantage is not having much competition for the accessory slot, but even then I feel that for 3xp you can be finding more reliable sources of card draw.

birdfriender · 211
I don't see Grisly Totem 3 as a source of regular card draw to be honest. It is a nice upgrade of its level 0 version that you 'll probably want because if you already have the level 0 version, it means you will be committing cards to tests often anyway, so it gives you a nice boost. Is it worth 3 XP? Not so sure. But it's definitely a fun way to get more card draw or give some card draw to your allies. I personally love this card in Minh and there's a certain build that combos this with Ancient Stone (Knowledge of the Elders) that turns Minh into a cannon. — matt88 · 2503 5/15/19
I think your math on 7 turns is a bit off, I think the +1 bonuses on test attempts is worth something too! I think this card can pay itself off in just 3 successes, and then becomes a bonus and card engine! — Tsuruki23 · 2205 8/14/19
4

The card is amazing for Minh Thi Phan. For a skill-heavy Minh deck, the difference between having Analytical Mind in the opening hand or not is huge. The card basically acts as a 2nd/3rd copy of Analytical Mind, drastically increases the opening hand consistency. Not only is that the case, it can also be played alongside Analytical Mind, and potentially another copy of itself with Relic Hunter (and trust me, it's worth it). With that setup, Minh can draw 4 cards a round extremely consistently. It also means she can commit 4 cards each round consistently, each with 2-3 icons. It's enough to cover every other test the party makes, if not more.

As a side note, the card combos well with Archaic Glyphs and Ancient Stones, which are strong cards you want to include in your decks anyway.

For other , the card is decent. decks naturally include skill cards like Deduction, Eureka!, Inquiring Mind and Perception, so the card will always have some use. However, the upfront cost of 3 resources is steep. It usually is not as critical as -buffing assets like Fingerprint Kit or Dr. Milan Christopher, so you may find yourself delay playing it often enough, making it a low priority upgrade.

ak45 · 401
I think there's a case for this in Daisy as well. If running Old Book of Lore, Daisy can have a ton of card draw, which makes skill cards attractive, which suggests a card for taking this card for even more card draw. It's another kind of engine to Dr Milan/Higher Education, and it's not Taboo. — Katsue · 8 5/25/19
I'm deep in a Return to Carcosa on Hard as Minh and my first 6 EXP was spent on two copies of this card. Regret nothing, intend to include this whenever I can. Icon-heavy decks are kept turning by their ability to draw cards, and this is quite the useful solution to keep your hand flush with options. — Swekyde · 58 10/13/19
1

Take any card and chuck it at an apropriately icon'ed test, give it +1 icon and dþcard draw.

All of a suddent that leftover copy of Magnifying Glass that you dont have slots for reads "Perception", that second Machete reads "Overpower". Actual skill cards? Those get real ridiculous!

Downright amazing card, ALL characters should take a close look at their deckslots and cost curve and try to squeeze this thing in at some point.

That point about cost is it's only detractor, at 3 resources playing this may break your bank if you're in the business of playing weapons, spell assets, Pathfinder and/or some big allies.