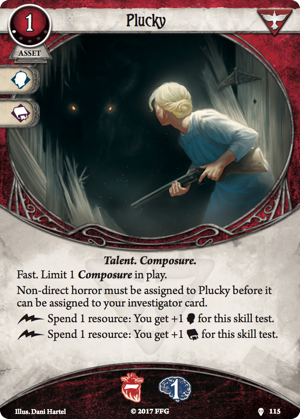 Plucky is arguably the best of the Composure assets released in Echoes of the Past. Like all five Composure cards, it costs 1XP & 1 resource, is Fast, provides stat bonuses for cash as a action, and has 1 sanity. Cheap, Fast, and is always a good combination, and the horror soak is a nice bonus. In particular, the Fast keyword allows it to be played while engaged with an enemy without triggering an attack of opportunity. This is probably more useful with a Composure that boosts or , but Plucky could also help parley or boost "Ashcan" Pete's for Shrivelling. It's also worth noting that, at only 1XP, investigators with access to experienced cards from two classes can choose from two different Composures, though only one may be in play at a time. Thus, William Yorick can choose between Plucky & Combat Training depending on whether he needs to boost & or & , respectively.

Save for Grounded, each Composure boosts 2 stats. In the case of Plucky, these are and --two of the more vital stats in the game. What's more, it pairs well with the otherwise lackluster Scrapper to cover all four stats for Survivors . No other class can cover all four stats with their Dunwich Permanent Talent and Carcosa Composure. Though some investigators can do so with the less efficient Core Talents (e.g., Jenny Barnes with Hard Knocks & Arcane Studies or Streetwise & Physical Training).

What really sets Plucky above the other Composures, though, is the ability of Survivors to recycle it, thus mitigating its main drawback of being discarded when it has taken just 1 horror. William Yorick is best suited to do so with his innate effect, though any Survivor can do so with Resourceful. In fact, William Yorick may, at present, be the best recipient for Plucky. In addition to being able to recycle it, he can use the boost to help investigate with his paltry 2, and Plucky's horror soak (repeatable with his effect) helps shore up his 6 sanity.

It also has my favorite card art from Echoes of the Past. Plucky indeed!