In the Thick of It

When you purchase In the Thick of It, suffer 2 total physical and/or mental trauma. Then, earn 3 experience. 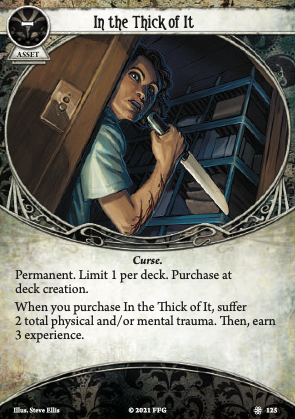 For me the best use is in an "Ashcan" Pete deck:

It's a strong enabler with permanents.

You just start with 1x Charisma. Leo Anderson loves that. Every Seeker loves not having to choose between Dr. Milan Christopher and non*-allies like Research Librarian.

You just start with 1x Another Day, Another Dollar. Money-builds might love that.

You just start with 1x Higher Education. Rex Murphy and many other Seekers with a Dr. Milan Christopher love that.

You just start with 1x Keen Eye. Cops and other guardians with money might love that.

You just start with 1x Streetwise. Rogues with money might love that.

You just start with 1x Studious. Everybody who likes to mulligan hard for special cards might like that. Big handers as well.

You just start with 1x Versatile. Everybody who needs additional cards likes that. E.g. Tommy Muldoon with a Joey "The Rat" Vigil or Harvey Walters who wants a True Grit, a Leather Coat and/or a Deny Existence to counter his Thrice-Damned Curiosity.

GrueneLupenAufheben · 90
Ancestral Knowledge is excepcional — Pawiu14 · 123 9/29/21
It could be interesting to analyse what Mateo and Parallel Roland get out of this card, too. Starting at 8xp lets you, say, start with two copies of Sixth Sense (4) for Mateo or 2 Quickdraw Holsters for Roland. — Prinny_wizzard · 213 9/29/21
For Mateo, 4 traumata seems a bit much. And I think, he will always rather take double AR. Unless of course, if you build him with hardly any spells to upgrade. For parallel Roland, I stand to what I wrote in my review: give him the SttP and EV combo for 7 XP. — Susumu · 271 9/30/21
Stick to the Plan to start with Parallel Roland is pretty lovely. Leaves two to add in versatile and one astounding revelation... — John Keel · 7 11/13/21
Should parallel Roland feel as unable to get started without his friendly surprised rabbi telling him the plan as the original anyway... — John Keel · 7 11/13/21
Deny Existence doesn't counter Harvey's weakness as it only prevents damage from encounter cards or enemies — Josemmb97 · 151 1/19/22
Thirce-damned curiosity is treated as a treachery (i.e. an encounter card) when being resolved, so Deny Existence definitely works. See the rules on "Weakness". — koaexe · 12 1/24/22
6

I'm surprised no-one's mentioned Calvin yet! This card allows you to start with trauma, giving him an instant stat boost. You can also tailor the trauma to how you're playing him.

The experience can be used on staples like Five of Pentacles and Spirit of Humanity. You can also be a bit fancier and buy cards like the new Prophetic, making Dark Horse decks run smoother by using Prophetic to pay for your Spirit events.

MJ Newman has screwed us again!

The uninitiated may think that this is the opening for Rogues or Rogue-secondaries to get more value out of Charon's Obol, but little do they know that this is actually a buff to Ursula Downs!

The first investigator I thought of when I saw this card was Father Mateo, as he'll start the first scenario of a campaign with "Blessed" fully turned on --- 8 XP gives him:

2X Priest of Two Faiths (Great with Calling in Favors! Even if you don't hit another ally you pull the Priest back to your hand, avoiding the token and you'll get to play him again later. If you hit another Priest he'll come in for free!)

2X Favor of the Sun (Your combo piece with Ancient Covenant)

Either 1X Holy Rosary (2) (probably preferred because it adds tokens to the bag) or 2X Radiant Smite (POWEFUL, but it pulls tokens out.)

You can use Book of Psalms (which adds more tokens) or Fearless (which I prefer because I like skills) to deal with the mental trauma you take to purchase this card.

This card creates even more possibilities: In the Thick of It + Versatile +

Down the Rabbit Hole

Vexer · 4
Yeah but is it useful? — MrGoldbee · 1315 9/30/21
I already covered this in my review: I think, it might be useful for the boxer and the rabbit. The reast I don't see. "Underworld Support" is sure terrible, if you counter it with Versatile, similar "First Learning". You dont't want to increase your deck size to 20. Investigators who can't take "Short Supply" also have hardly any cards to provit from the discard and "Geared Up" looks like a terrible card to me, period. — Susumu · 271 9/30/21
As for other guardians: I think, the high amount of upgradable Guardian events and the fact, that Nataniel has several tutor options for his Gloves (I would include "Calling in Favors" to tutor his signature-tutor), and once he has his Gloves good card draw to counter the bigger "versatile" deck, gives him an edge over other guardians. Sure, they will take a couple of these events, too. But your regular "big gun" build relies much more on upgrade cards, that do not exist at level 0. — Susumu · 271 9/30/21
This combo will enable all sorts of wonderful jank! — Gibby · 1 11/22/21
3

This just opened up the game!

From now on every investigator that can and would take Charon's Obol, should take this card! It's a dangerous endeavour but it's fun and totally worth it in my eyes. And more importantly:

Basically, "Ashcan" Pete got the most out of this permanent!

This is such a great tempo bust to the upper mentioned characters. I think, In the Thick of It has become my favourite card out the newest expansion just by existing!

Thank you, the design team, at FFG.

Give this to Parallel Roland (yes, he of the Directives) and you can start a campaign/standalone on 8xp.... making him 7-5 (I would assume, unless you're leaning into immediate Desperate cards)

I'd be interested to see what the community can build, on 8xp starting...

2 traumata for 3 XP don't look great at first. You can trade 5 XP for healing one trauma in the interlude after "Threads of Fate", albeit I think hardly anybody would do this. But XP even before the first scenario are most powerful. You will have the cards you purchase from them for 8 scenarios (not accounting side stories). However, I see options, how to net gain quite more than that from this card.

Like already mentioned by Pawiu14, Calvin might be interested in the traumatas themselves. I'm not sure about that. I have not played him yet, but by experiences from coplayers in "The Forgotten Age", I've seen it can be a clutch to get him through this campaign, so starting right off the bat with additional ones to what you will get from your weakness, might be rewarding at first, but risky later on. But in a campaign, that doesn't dish out traumata in interludes, this should be a whole different thing. Starting Parallel Roland with 8 XP, like suggested by fiatluxia looks interesting, to start a campaign with Stick to the Plan and Ever Vigilant.

, who want to go Down the Rabbit Hole might consider that for the dualclass Spells Brand of Cthugha, Divination, Blur or Earthly Serenity. Taking three of these cards at deck creation effectively gives 6 XP, avoiding the penalty from DtRB to add them later. Not sure if that's worth it. Arcane Research nets likely more than DtRH for most and 4 traumata is a bit much.

Charisma (or for some Relic Hunter) is another solid pick, offsetting the traumata with additional soak options, keeping your allies or Holy Rosary longer in play on top of the additional value from whatever you play with it.

But the combo, I'm most eager to try out, is sending Nathaniel Cho into the rabbit hole. Thanks to this card, he can take Versatile at deck creation and then the Permanent. This is also true for any other investigator with any other of the new "Limit 1 per deck. Purchase at deck creation."-Permanents, they could not take otherwise. But NaCho in Wonderland seems like the most striking combo out of the bunch. He has a lot of events, he might be interested in upgrading. The same goes to Allies like Beat Cop and (to a lesser degree) Grete Wagner, his Boxing Gloves, Safeguard, possibly Backpack or Bandolier. Not all these cards will be great at level 0. You might take On the Hunt just for the rabbit, so your level 0 deck might be worse than without this setup. But I think, the XP acceleration should be worth it. It should be also OK to pay 4 XP for a Charisma or Keen Eye later in the campaign (in particular, if you want to upgrade Grete), or 7 for Stick to the Plan and 2 for Ever Vigilant. The later could also be purchased at deck creation for 1 XP, since Versatile costs only 2, but I think, a Mano a Mano (1) would be the better pick at that time.

Susumu · 271
I know it adds 3xp for you right away but can you spend it right away? I know everyone is leaning that way and I'd certainly think so but does anyone know for sure? — JourneysintoArkham · 5 1/29/22
Bullet point 4 of "Deckbuilding" in RR: "Most investigators have 0 experience to spend at the beginning of a campaign, which means that they may only include level 0 cards in their decks. Some investigators, and/or some campaigns, may provide a player with additional experience at the beginning of a campaign, which can be used immediately to purchase higher level cards." I think, this clarifies that you can. — Susumu · 271 2/12/22
1

For me: card is good, but not for every character. If you have <4exp cards that you need most, take it (Calvin loves it)