Forced - At the start of the investigation phase: Draw 1 card. Discard the card beneath Amanda Sharpe. Choose a card from your hand and place it beneath her.

Forced - At the start of a skill test you are performing: Commit the card beneath Amanda Sharpe, if able. Do not discard it when the test ends.

effect: +0. For this test, you may double the number of skill icons on the card beneath Amanda Sharpe. 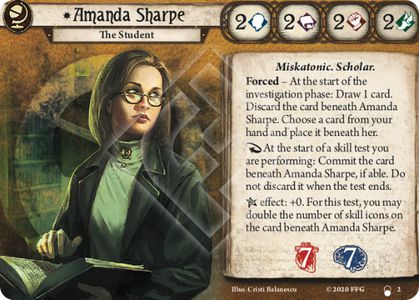 Amanda Sharpe was on track to become one of Miskatonic University's most accomplished graduates. However, ever since she saw a strange painting of an enormous creature's emergence from the depths of the ocean, her classwork has suffered. Her dreams are overwhelmed by images of a vast submerged city and whispers in a language she does not understand. She remains dedicated to her studies, but her goal is no longer to graduate at the top of her class; rather, she seeks to discover the meaning behind the occult secrets concealed between the lines of reality. 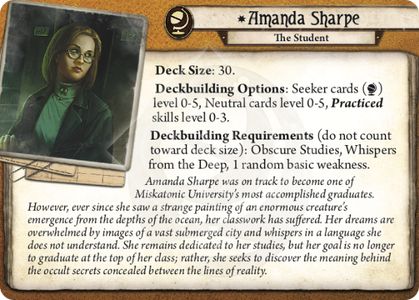 Django‘s review explains many many ways to play Amanda, but doesn’t answer why.

Amanda is the seeker equivalent of Calvin or Preston, with low stats that are accounted for with a special ability. And while Prestons makes a lot of sense (he’s a lazy guy who makes up for it with money), and Calvin’s is a bit more tenuous (looking at rotting remains gives him additional willpower?), Amanda’s is amazing.

For young people, college is a time of unparalleled opportunity. Especially for a woman going to an integrated college in the 1920s, there’s really no archetype to fall back on, how to act, or who to be.

So Amanda gets to choose. If Roland Banks gives her a machine gun, she can lay down brutal attacks. But if she decides to spend her semester in the Orne library, she can equal the card draw of professor Harvey.

Unlike other adaptable characters, like Jenny Barnes, Amanda can be super good at what she needs to be when she needs to be it. No need to be broke to trigger dark horse, no need to flush cash into physical training or hard knocks. So what’s the downside?

Again, it’s like a college. You might run out of options and have to be someone else for a while. That someone else might be an ancient frog person. It could also be hard to prioritize playing assets, compared to using your high skills to just pass checks.

But as a seeker, Amanda is extremely well-positioned to cycle her deck and get her best cards back. She also has better self-preservation through most, able to raise her brawling talents or simply run away.

In solo, Amanda can hoover up clues, then deal with bosses. In multiplayer, she can carry fightier investigators without needing rescuing. And that’s a Major advantage.

This character has a very strong ability and combo potential, though her low stats seem to be the balancing factor. Cards with constant bonuses will work well on her, like Milan, Magnifying glass and Death. Or temporary replacement, like the Red gloved man or Strange Solutions (Acidic).

I think the most powerful combo on her will be Quick thinking (gained through Versatile) + Red gloved man, potentially gaining close to infinite actions. Both stay during next mythos phase, so the combo may go off again if you succeed on an encounter card.

Enraptured targets for secrets and charges

Django · 4112
As a minor point, Markings of Isis only lets you put an asset into play if you succeed by its cost. That means that if you have DoN beneath Amanda, and get the shroud down to 0, but don't commit any cards, and draw a -3 (fairly common) you could only put 2 0 cost assets into play for free, which is only a little better than just making a play action (you do also get a clue, though). You could commit stuff to the test to have a better chance of putting higher cost assets into play. There are also static boosts that make this more effective. — Zinjanthropus · 199 5/24/20
I do really like the Daredevil + Three Aces interaction. That's a cool combo that would be improved by Practice Makes Perfect. Using 2 PMP to try to dig out 2 aces, OTOH is quite risky unless you only have 10 or fewer cards left in your deck, but a much higher ceiling, of course. — Zinjanthropus · 199 5/24/20
What DoN stands for? — Susu · 35 10/3/20
@Susu Double or Nothing — Death by Chocolate · 1105 10/3/20
With the taboo on double or nothing making it costs 3 XP toi car add it with versatile. — Susu · 35 10/4/20
@Susu the taboo on DON just changes the cost, not the level of the card. — mazrim · 1 10/8/20
what if you start investigation phase without any card and you draw a weakness? or an ocult weakness — toriano · 3 1/5/21
I added "rules clarifications" at the top of my review. What do you mean with "occult weakness"? — Django · 4112 2/6/21
11

Having played Amanda, I can safely say that she is one of the most powerful characters in the game, and one of the strongest Seekers as well.

Amanda does both of these, and does them while stationed in the fundamentally strongest class, having access to all of the benefits Seekers have, as well as various powerful Practiced skills such as the new Promise of Power or Three Aces (with experience).

One thing I have noticed when seeing others evaluate Amanda is the belief that she has low stats. She sure doesn't feel like that when she is played. Due to drawing an additional card (or more, if you've got Dream-Enhancing Serum, you will regularly have a card with good, or great, icons to slot underneath you. If your deck is built right, you will often have between four and six to the stats you care about on a given turn, or all of them (Promise of Power is really, really good.)

You can regularly have The Red-Gloved Man, without spending neither resources nor experience, just by playing your gator. You can fight, as Vicious Blow and Overpower are both Practiced skills. You can be pre-Taboo Rex, or better, by putting Deduction or Deduction underneath you.

You can take Amanda Sharpe in a myriad directions, and no matter which direction you take her, you will likely be successful. I'm personally partial to taking the regular Seeker route, abusing such cards as Practice Makes Perfect, Astounding Revelation, and Eureka! in order to draw through a deck incredibly quickly. Putting Eureka! or Perception underneath your investigator means you can fairly easily, comfortably, draw five cards in a single turn, Once you've spent experience, this lets you assemble Pendant of the Queen and Three Aces quite rapidly; without the newest Taboo list, you can quite comfortably play three copies of Three Aces every other turn.

In short, Amanda good. However good you think she is, she's better, and if you are not careful, she can quickly take over an entire game and overshadow other players. Be careful when you play her.

hatfulofbomb · 86
How can you repeatedly commit Three Aces? Once you play them on one skill test, they go to the discard. Even if you have 1 copy under Amanda, the other 2 copies still go into the discard. Can you please explain? Thank you. — VanyelAshke · 164 12/8/20
I would imagine the idea being that you reduce her deck down to about 15 cards by having 8ish in hand and assets out. From there, you are using something like Eureka to potentially draw 3 on top of her normal 2 at the same time you thin the deck by finding Astounding Revelation three times. Then Three Aces causes you to draw three. You play another Eureka the next turn and flip five more in a turn - that's a total of thirteen cards plus three Astounding Revelations for 16 cards drawn in two rounds. On turn three you are back to a fresh deck and using search cards again to dig out your Three Aces. — Time4Tiddy · 187 2/2/21
You can only target one Astounding Revelation per search. — marduk360 · 1 8/2/21
3

When I started playing Amanda, I was so intimidated by her Stat line. Also the concept of placing cards underneath her were confusing. I always found myself wonder what cards to put under her, when was the best time to commit said cards, etc etc.

Djangos review teaches you about how to put out some serious combos. But I wanted a clear cut way to determine what kind of cards needed to be put underneath her. After playing 3 campaign, where she was not only the main cluever, but also a decent fighter. I have divided the cards she has into 3 different groups. And doing this help me prioritize what kind of cards you need to put underneath.

Now, the next question I wonder was, when do I place underneath the above mentioned cards? This is a very obtuse question.the scary thing about this game is that it is ever changing, it is always evolving. You can make plans to do 1 thing, and the game might make you do another, you can't always predict the future. But that's kind of how you play her. You use your current game knowledge and try to be as flexible as you can be. The interesting thing is she is like a river. She is fluid, always changing, always moving. When I play her. I always build for a big hand, and it never fails. Big hands means she is always prepared.

You might have discard assets, or lose resources or health and santy. But she has got one of the best draws, drawing 2 cards for free each round, and that's not ontop of the other draws she can preform. She will cycle her assets, event and skill cards again, ready to be committed, and played again, and once you figure that recipe, she will shoot to the stars.... as long as she doesn't hear an whisper from the deep... :/

Therealestize · 29
Great review. I love that you call out Fodder cards - that's something I came to realise was v important after a couple of campaigns with her. — acotgreave · 334 1/3/22
It's also important not to let your handcards run out or you'll be ofrced to put important assets under her. — Django · 4112 1/4/22