The Tower • XVI
Circumstances Beyond Your Control

You cannot commit cards to skill tests while The Tower • XVI is in your hand. 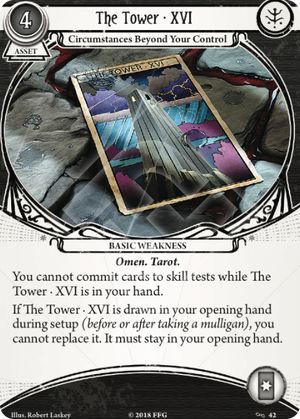 I think this card is very penalizing, as it imposes 3 negative effects that aren't all obvious:

However another tarot card can be played to discard the tower, once it's in play. The rules about weaknesses only prohibit players from discarding weaknesses from their hand, not from play (unless the card itself says so).

Django · 3892
I think a case can be made for The Tower to be the most heavily penalising random basic weakness, including Doomed. This is actually more than twice as bad as Indebted when you take into account the mulligan clause. — The_Wall · 243 2/1/19
The_Wall, I don't entirely agree with it being twice as bad. I agree it is very punishing. However, Indebted is Permanent, so it will hit you every scenario. This only matters if you draw it, so you could dodge it. Of course, never having to worry about drawing Indebted instead of this is also something one could argue about... — Veronica212 · 170 2/8/19
Is there any restrictions agianst shreading it through the Cornered for +2, or through Wendy's and Pete's abilities? — theczarek · 2 2/26/19
Ok, silly my - Review ansered my question :P — theczarek · 2 2/26/19
I think it’s really swingy and heavily dependent on: — carlsonjd11 · 419 4/15/19
The investigator and when it’s drawn. It’d crushing to Silas, Minh, and Calvin (or anyone who heavily relies on committing cards). It’s less so on investigators who rely on assets and events, especially after they’re setup. It’s also most crushing if you get it in your opening hand or in the middle of the game before you’re setup and are maybe still relying on committing cards. — carlsonjd11 · 419 4/15/19
If you are playing a Guardian, Ever Vigilant helps mitigate this weakness. Can save 1 action to play it and 1 resource. — Ezhaeu · 40 8/27/19
You forgot one thing, if in Mulligan, unlike other weaknesses it IS one l'ESS card drawn (and one less redraw). So anyway it is 1 lost draw ans a Mulligan fear, so another penalizing effect., — LeFricC&#39;estChic · 82 1/25/20
Sorry, autocorrect gone wild, *less *and. — LeFricC&#39;estChic · 82 1/25/20
This has been a rough weakness for me and my Joe Diamond. The past few scenarios in TCU I have either started with it or drawn it the first few turns and haven't found Milan until near the end of the game. When combined with Indebted... It has been a sad time for literally poor Joe Diamond. — cooker · 1 2/13/20
Just started a rum with Silas and this weakness is crippling for him. i think couldn't have gotten a worse weakness. — nungunungu · 4 4/3/20
I had two of these in my first deck; as I drew one for my random basic weakness and chose Intro 2 during setup of the Witching Hour. So stuck with two for the whole Campaign! — corbs · 10 5/12/20
In a recent scenario, I played this with ill grace, but then got an asset-eating Treachery, so it became a rather expensive shield. — LivefromBenefitSt · 842 9/18/20
is it even a good idea to buy a tarot card once you get this as your weakness..? — FindetClemo · 1 7/4/21