During your turn, discard an asset you control: Play an asset with a different title from your hand, reducing its cost by 1. (Limit once per round.)

effect: +2. You may return an asset from your play area to your hand. Then, draw 1 card.

"Do you want to see true magic?"
Tony Foti
The Innsmouth Conspiracy #4. 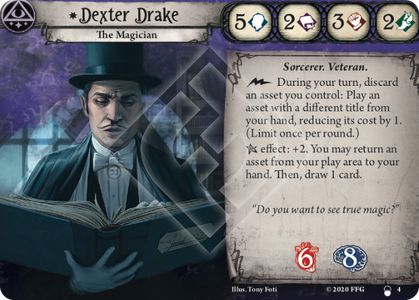 Dexter Drake returned from the Great War to become a successful magician, enthralling audiences with his elaborate illusions and cunning stage tricks. Despite his meteoric success, Dexter longed to discover true magic. He was intrigued by the burnt and torn scraps of occult writing he had found during the war—fragments of the infamous Necronomicon. Dexter used his wealth to search for the truth about this ancient lore, and what he found horrified him. He knows that he may well be the only person with the ability to stop evil from swallowing the entire world. 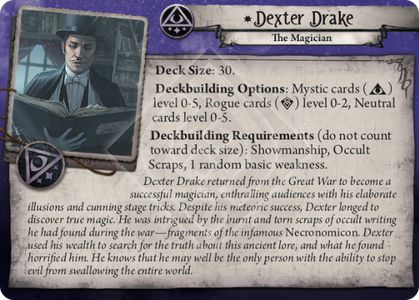 “Take a card. Any card. Shuffle it with the other 34… Don’t let me look at it. Was it illicit? Was your card liquid courage(1)? Your card is in play for zero resources, thank you Molly!”

No one else can give you what you need right in time for the exact situation you’re facing. Amaze friends and loved ones! Gather clues and send enemies to the blazing pit! Read on, I pray you, read on!

Dexter knows that magic makes money. Although his rogue 0–2 pool prevents him from getting the truly game-breaking stuff (Lupara, Lola, Delilah), it gives him access to some cool weapons, some events and momentum. Momentum is useful for when you have to pass parley checks; with your tuxedo (and it would be a tragedy to play Dexter without fine clothes), you can pass a magic check with your superior willpower, and auto succeed on a parley up to difficulty five. Or with a flashlight, an investigation at five shroud haunted location.

Dexter’s ability makes him one of the most flexible people ever released for this game.

He can mitigate and use expertly some of the double edge swords common to the Mystic deck. Use Gregory Gry early on to make money, and replace him with David Renfield to make even more cash. Use an arcane acolyte, and replace them when their doom would be a problem for the team. When you have the charisma to hold multiple companions, you can add a familiar spirit and Haste, letting you use activate four times in a row. (Activate, activate, sixth sense, sixth sense?) Hopefully you have some recharges and/or Twila to help you out.

Molly is a wonderful, wonderful signature. If you build your deck precisely, once she’s out, you get four different chances to get whatever card you want. If you decide to call in favors, you can play it again later. You never need to be unprepared.

The trap you might run into while building for Dexter is that everything looks good. Leather Jackets and robes of endless night. Shriveling and mysts of Ryleh. In solo, you want a little bit of everything. With others, make sure that you’re not trying to cover every single niche. You need skills and events!

The stage magician will succeed as long as you get your lovely assistant and showmanship out. Always take both signatures, the weaknesses may slow you down but they can’t stop you.

Nothing up your sleeve. Pick a card.

MrGoldbee · 253
A good intro to Dexter, who I've jsut started running through TIC. I would add that resources are always an issue for him, because he wants to play, play, play. He has ways to generate economy, as you point out, but everything looks so good! Shning Trapezohedron is attractive, but it's a big chunk of XP.It's also worth stocking singletons -- so one Shrivelling and one Azure Flame, for example, so you can use his ability to trade one for the other. — LivefromBenefitSt · 193 10/14/20
He can also take Rogue econ cards like Lone Wolf, Watch This, and Easy Mark, not to mention the new Faustian Bargain, or Greg, as the review mentions. — Zinjanthropus · 97 10/14/20
0

So Dexter is the only player card that has a May effect that occurs before a Then effect, so now we enter a curious situation, does choosing "no" on a may effect not count as resolving the effect in full. So do you only draw if you return a card to your hard, or do you only draw if you have an asset to return. (and then choose to return it or not)

Yog leads me to believe choosing 0 still leads to the then effect triggers, the effect resolved successfully, you just choose a minimal value.