Exhaust Molly Maxwell and deal her 1 horror: Name any trait. One at a time, reveal cards from the top of your deck until an asset with the named trait is revealed. Draw that asset. Shuffle each other revealed card back into your deck. 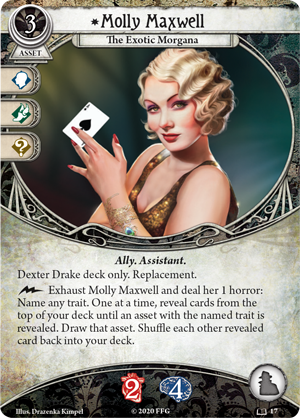 I like Molly. Her cost of 3 is about average for a Ally, she has some decent soak, and can get you 3-4 named card draws if you are careful about the Assets you use. It's worth making a list of their unique traits, so you know if you want combat, you say "firearm," if you want your Shining Trapezohedron, you say "relic," and so on. The only drawback is that most of the spells have only the trait "spell," so Molly is just going to hand you the first one she finds, which isn't great if you wanted Sixth Sense and you get Spectral Razor instead. However, if you are judicious in your selection of Assets, keeping an eye on traits, you can get pretty close to making Molly a four use No Stone Unturned (5), which is not bad. She also does not get in the way of the "box" signature Showmanship, which puts Dexter in a pretty good place to take both sets of signatures, if you dont't mind a thicker deck.

the only dual trait spells available to Dexter are: Blood Pact (pact), Eye of Chaos (cursed), Seal of the Seventh Sign (ritual), and Song of the Dead (song), none of which particularly scream "Dexter!"

LivefromBenefitSt · 910
She gets better when she's healed by solemn vow (moving horror to peter sylvestre) or ancient stone (minds in harmony) — Django · 4246 10/7/20
A minor clarification: you won't draw Spectral Razor with Molly, because it's not an asset. But your point still stands. If you need Sixth Sense and name "spell", you could end up with a Shrivelling (or other spell asset) instead. — Csys · 1 10/8/20
Ah, good catch, thanks. — LivefromBenefitSt · 910 10/8/20
Fantastic card. She is a great tank for the price, her ability matches well with Dexter's signature action and usually there are plenty of assets you want to have in play, besides spells which can be found by other means. I usually put two Calling in favors in my deck, to either find her reliably or to milk more uses out of her ability. — jcdenton · 4 1/8/21