: Investigate. Investigate using instead of . If a , , , or symbol is revealed during this test, you may choose a revealed location connected to your location; you are now investigating as if you were at the chosen location instead of your location (you may use either shroud value).

Brian Valenzuela
The Wages of Sin #158. 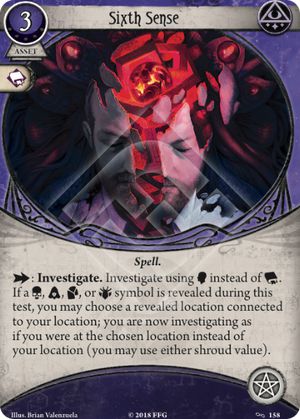 Sixth Sense competes with tried-and-true Rite of Seeking. They are both level 0 Mystic Spell assets that let you investigate with willpower in place of intellect, which can be a crucial ability for low intellect investigators such as Agnes and Akachi. Let's compare these two Spells:

The reward Sixth Sense offers you for drawing a funky token is worth talking about in more detail because there's a lot going on there. It will allow you to sometimes investigate at dangerous or high shroud locations that you might otherwise be locked out of. It can also protect you from token effects, large negative modifiers, and the Haunted keyword by lowering the shroud of a location you are investigating (although you must change the location you are investigating at in order to use this effect).

Unless you're willing to use Dark Prophecy this effect isn't reliable, but it is a kind of insurance against the chaos bag. Finally, a location must be revealed for Sixth Sense to let you investigate at it instead or use its shroud, meaning it pays to follow another player around, investigating to pick up clues left behind with the added possibility that you sometimes get a clue from a location they just revealed instead.

To conclude: Rite of Seeking is still the premier level 0 Spell for picking up lots of clues quickly, but Sixth Sense offers a persistent and highly reliable way to investigate using willpower. Having played a little with it at this point, its definitely a strong card for allowing Mystics to consistently contribute to investigating, so try it out!

Trinity_ · 192
Great review! 2 thoughts: First Sixth Sense might be better in solo than Rite of Seeking, second I don't see Sixth Sense as much as a competition than an additional option if you want your my stic to investigate reliably. — mogwen · 250 5/19/19
I didn't go into a lot of detail about why I think Sixth Sense competes with Rite of Seeking because I wanted to focus on comparing it to the older spell, but basically I think it isn't worth giving up two Arcane slots to both investigate with when Mystic combat spells are so powerful, and because Sixth Sense persists and doesn't deplete charges, I don't think you want to play both it and Rite of Seeking in the same deck. — Trinity_ · 192 6/21/19
If you're going for dedicated clue-gathering, it's actually pretty viable to run both, especially since you can replace Rite of Seeking once it's empty. Grotesque statue and Eldritch Inspiration help with using Rite of Seeking quickly, though. — Chitinid · 14 6/22/19
Good review! I'dd like to mention that the infinite nature of Sixth sense, a high stat isnt quite so crucial. Unlike Rite of seeking youre willing to make half-assed attepts at 4 or 5 willpower since there is no risk of loosing the charge — Tsuruki23 · 2350 8/22/19
How do this interact with Eldritch Inspiration? Do I get to investigate again either in my location or a connected (with the same token from the bag)? — Old_Man_in_the_Mist · 1 11/24/19
You would get again the choice to "choose a revealed location connected to your location; you are now investigating as if you were at the chosen location instead of your location (you may use either shroud value)." Now, since you were already investigating as though you were at the first location you picked, you might have the choice now of locations adjacent to that one. But you'd still only end up investigating at one location total. — Yenreb · 15 1/6/20
1

Do all parts of that "as if" from the FAQ apply here?

Don't attacks of opportunity occur before you reveal the chaos token? ("An attack of opportunity is made immediately after all costs of initiating the action that provoked the attack have been paid, but before the application of that action's effect upon the game state.")

This card specifically says "You are now investigating as if you were at the chosen location", so surely the attacks of opportunity don't happen here?

Phoenixbadger · 180
Critical question for this card: if I am at a location with 1 shroud and no clue and a connecting location has shroud 7 and a clue and I investigate using this card and draw a skull, do I get to collect the clue on the high shroud location? I don’t see a reason why this shouldn’t be allowed, just like Burglary, and makes this card even more valuable for clearing high shroud spots, Obscuring Fog, etc. — mbooradley · 6 5/12/20
@Phoenixbadger I'm nearly certain you are correct, though I'd have to read the "as if" entry again to say why. @mbooradley You are also correct; you're investigating the high shroud location but using the low shroud value. — SGPrometheus · 688 5/13/20
even if you are investigating "as if" on another location, it does make you engaged with enemies on that location — Adny · 1 5/13/20
I'm no kind of authority or anything , but I think Attacks of Opportunity happen the way the OP describes. "Immediately after all costs ...are paid" defines the timing point of AOOs right? And since the only cost of initiating a Sixth Sense investigation is the action itself, AOOs should be pretty much the first thing to resolve in the timing sequence, so you'd get them at your original location but by the time the "as if" kicked in the timing point for AOOs there has been and gone. Conversely though, the "as if" stuff is in effect when you actually discover the clue so you wouldn't be able to e.g discover a clue at a location with an enemy with doom were Words of Power in your threat area. That's my take, at any rate.. — bee123 · 24 5/13/20
everything as you wrote, except AOO is not tied to enemies at your location, but to enemies engaged with you — Adny · 1 5/13/20
Does this mean that unenganged ready enemies at the other location engage you? — Django · 4428 5/13/20
(my previous comment was missing an important word O:-) ) even if you are investigating "as if" on another location, it does NOT make you engaged with enemies on that location — Adny · 1 5/13/20