When you would pay the cost of a Spell card, exhaust Shining Trapezohedron: Instead, test (X), where X is the card's resource cost. If you succeed, its resource cost is considered paid. If you fail, cancel the playing of that card without paying any of its costs (including its action cost). For the remainder of the round, you cannot play copies of that card.

David Demaret
Weaver of the Cosmos #329. 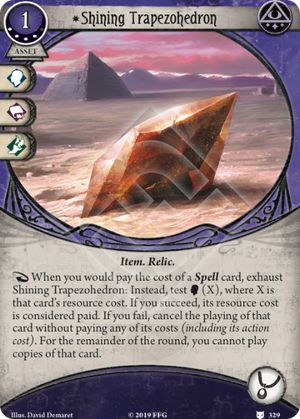 Quote from Appendix I: Initiation Sequence: Determine the cost (or costs, if multiple costs are required) to play the card or initiate the ability. If it is established that the cost (taking modifiers into account) can be paid, proceed with the remaining steps of this sequence.

So you must have the ressources to pay the spell, even if you ignore them with this card.

Django · 4434
I'm pretty sure that isn't actually the case - note "taking modifiers into account". It's possible to pay the cost as modified by the Trapezohedron, so you continue. — Thatwasademo · 44 5/11/20
So which is it then? Do we need to have the resources to play the spell or can we attempt to get it out onto the field with our pockets empty. While I usually grim rule, in this case, I personally think you can attempt to play it even if you don't have the resources for it. The reason being is if you fail the skill check, you are blocked from playing the spell or any other spell of the same name that turn. Meaning you can't just default to paying the resource cost if you fail so there's no point to having the resources other than to satisfy some weird video game logic. — LaRoix · 1608 7/7/20
"Instead" is also part of the rules reference: The word "instead" is indicative of a replacement effect. A replacement effect is an effect that replaces the resolution of a triggering condition with an alternate means of resolution. — Susumu · 271 11/17/20
So the resource cost is replaced by the test. You can and should consider it zero, when activating this card and therefore can "pay" it's cost regardless. — Susumu · 271 11/17/20
On the contrary, the fact that it's a replacement effect means that there must be an effect initiated to begin with. The card explicitly says, "When you would pay the cost of a Spell card," before you can activate the card whatsoever, meaning that, in very cut-and-dry words, you can't activate the card if you aren't initially "paying the cost" because THAT'S the effect that you're replacing. In response to LaRoix's "there's no point in having the resources [since you can't play the card for the rest of that turn after a failure]: why even add the clause where "you cannot play copies of that card" if you couldn't even afford it in the first place? Like, what a waste of text. If anything, that should support the idea that you have to be able to pay for the card to begin with: it's a gamble that has consequences should you fail (you can't just decide to play the card as usual). — TheDoc37 · 462 7/15/21
^ "you cannot play copies of that card" is not a waste of words, since of course you can still have a situation where you have the necessary resources but want to trigger ST, but a failed ST trigger prevents you from playing it afterwards. I'm fairly convinced that this card can be used even if you have no resources. The Initiation Sequence clearly states "If it established that the cost can be paid, proceed with the remaining steps of this sequence." (Answer: Yes the cost can be paid, by triggering ST) — flamebreak · 19 11/30/21
Also if you only think about the intention of the card from how it is written, it is obvious that you should be able to play spells with ST even if you don't have the resources. There wasn't a doubt in my mind this is how it works, until someone dug out the rulebook and started reading it word by word. Chuck Fergus has a similar issue with the wording of the card when it comes to picking the "Fast option" out of the three options. If you went by the initiation sequence, the Fast option can not be picked at all, since then you're taking a play action to play a Fast card, while the rules clearly state "A fast card is not played using the "Play" action." — flamebreak · 19 11/30/21
Sorry in advance for making this a reddit post haha: 1st comment.) I mean, I think we agree how the effect would work should that scenario be the case, but using that interpretation, you're actually being punished for having the resources to pay for it, as opposed to being poor, failing the test, then not having to worry about any backlash whatsoever. That....doesn't make sense balance-wise; they should have just left that line out entirely. 2nd comment.) I would agree with your Chuck example (and actually thank you for making me look up that interaction because I didn't understand it previously but now I do :) ) if not for the trigger difference: "When you PLAY", which the comment thread on the top review seems to be in consensus that that would occur when declaring intent, vs. the very very specific wording of "When you would PAY THE COST". Not DETERMINE the cost. PAY it. Based on that wording, this occurs while you are in the process of paying it, well after initiation. Also, sidenote, you can't just present the card's "intention" as a supporting point; the intention is the very thing being deliberated on right now <__< — TheDoc37 · 462 3/11/22
What steps would have to be taken to get an official ruling on this? It's certainly been out long enough. — TheDoc37 · 462 3/11/22
"If you succeed, its resource cost is considered paid" is not the same as "its resource cost is 0." Which means you still need to be able to pay the cost notwithstanding ST's effect in order to initiate playing it. In addition, Appendix says that paying the costs doesn't happen until after it is determined that the cost can be paid, so ST's reaction ability cannot have fired yet when you check whether the cost can be paid. — Signum · 14 1/31/23
5

Not quite a review this is, I am rather pointing out an interesting synergy with the Survivor card suite. Take for example Drawing Thin. When you use Shining Trapezohedron to try to pay for a spell, use Drawing Thin to reap resources or a card and increase the difficulty. This is beneficial if you:

You can add Take Heart and Rabbit's Foot (Relic Hunter is needed for this though) for extra free cards and resources.

Ofcourse, the above 'fail' scenario does not count in the disadvantages of chaos tokens with additional effects.

Lateralis · 6
There’s also synergy with the Rogue card suite because you can take a test with a controllable target number - even as low as 0. Lucky Cigarette Case, most Rogue skills, etc. lots of value. You can also use this to set up another test using Momentum. Dexter Drake our main man for this, and his ability synergizes by lowering the cost of the assets becomes plays with it. This puts Scrying and Alchemical Transmutation down to 0 cost spells as well. As a bonus, Alchemical Transmutation also has similar synergy with Rogue’s suite, and gets a lot of value in Drake where you don’t have to pay an action to play it, and can get value from it once depleted or no longer useful. — Death by Chocolate · 1258 8/22/20
2

Not a review - may do that later, but if you ever hear about a card being referred to as "Rhydon", as in, the Pokemon Rhydon, it is this card. The name comes from a joke made in the Mythos Busters Discord and it stuck, so that's the nickname I'm pushing for it now. I mean, the name of this card is frankly very long and hard to say, so of course, it needs a nickname and Rhydon is as good as any. It sounds vaguely like Shining Trapezohedron, if you pronounced it wrong, which let's be real, you probably did at least once.

This in theory looks like good Mystic card. As a Mystic you already want to stack willpower boosts. This lets you willpower not only to cast spells, but also pay for them. If you get to 6-7 willpower, you are almost guaranteed to be able to play 2-3 resources spell each turn for free. I'd say this pairs well with Jewel of Aureolus, allowing you to reveal more tokens and generate more resources and cards, but they both cost XP, and use same slot. But I can see funny Agnes 2x Relic Hunter build, where you want to use this,Jewel of Aureolus and Heirloom of Hyperborea and play as many spells as possible, while drawing insane number of cards while doing this. This would be deck with pretty large ramp up, but after getting set up, you should cycle through your deck at insane speed.

Combine it with Dayana Esperence and low cost powerfull spell like Deny Existence. Shining Trapezohedron will cancel the additional cost (spend secret and exhaust Dayana) and allows you to play Deny Existence each round after passing 0 test.

Śliski · 25
It says "resource cost", though. So you still pay the secret if you succesfully perform the test. — trazoM · 9 9/16/20
Ah... i have misread the card... I have mixed the success part with failure "any cost" part... — Śliski · 25 9/16/20
Wroooong, additional cost cant be canceled. — yarhma · 1 9/16/20
This still feels good in a Mystic/Seeker deck, as Seekers have access to Truth from Fiction and Eldritch Sophist for putting additional secrets on. I might try it with honorary Mystic Norman Withers. — BlankedyBlank · 18 10/5/20
This card is still good with Dayana, since then you have plenty of targets to use Shining Trapezohedron on. Attach something like Read the Signs on dayana, and you have a good chance of finding 2 clues with a 0-cost event. — flamebreak · 19 2/6/21