When you reveal an chaos token, shuffle an attached Dream Parasite into your deck: Cancel that token. 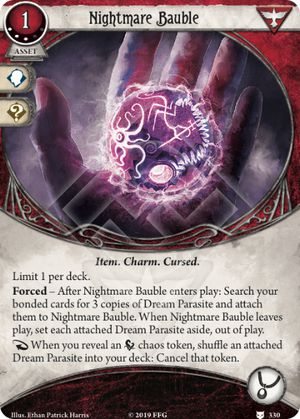 It might just be me, but I never invested too heavily in the various -canceling options in this game. "It's just 1/17 of a chance," I always said. "Sure, I'll draw the tentacle a couple of times in each scenario, but them's the breaks. You're just gonna have to realize you'll fail a few skill tests in the scenario, and that's not worth investing a lot of XP and deckslots to guard against." (This goes double for the class, with all of its fail-forward schemes. You'll often be glad to see the . I wonder if that's why the token is red...)

And in truth, I largely still hold to that philosophy. My XP always goes to action-compression tools and testless autosuccesses before I spend anything on an insurance policy against failure. And let's face it, Nightmare Bauble has a hefty price to pay--3 XP and the forfeiture of powerhouses like Rabbit's Foot and Cherished Keepsake. But then I made a Rita Young deck based on Old Hunting Rifle and Ornate Bow, and in that particular case at least, my mind began to change.

When Rita's set up with Boyfriend and Adidas, she fires the Bow at a skill of 9. Depending on your difficulty, that's either an almost-guaranteed success, or at least some pretty damn good odds in your favor. The problem is that using Ornate Bow is a very action-hungry and unforgiving playstyle--if you miss a single shot, you're in a bad spot, and in this case, removing that from the equation does have real value. Similarly, the OHR can be your best friend, or leave you high and dry at the worst possible moment, so any way to prevent one of those worst-case tokens becomes almost mandatory.

So, to sum up: Nightmare Bauble could be considered when you have a specific reason to fear the , but I wouldn't find it worthwhile as blanket insurance against failure on general, ordinary skill tests.

You might have guessed that I'm speaking from experience here. Picture this: with the above-mentioned setup, I was engaged with a resilient enemy who dishes out some serious pain. But it's fine, right? I'm testing my 9 with the Bow against its 2. And.... Fortunately my evade and reload worked--but still, that's a whole turn basically lost from one nasty, extremely unlucky pull.

The problem is, I didn't have Nightmare Bauble on the table, since I typically mulligan for things like Bow, OHR, Peter, and Track Shoes. It's a "Limit 1" card, and Rita isn't strong on the card draw. It turned out to be the next card I drew for upkeep, but by then it was too late--I'm engaged with a boss, and can't spare the action to play it. So that's another hidden drawback: if you don't have this out from the beginning--which is easier said than done--you almost shouldn't bother, because you won't get repeated uses out of the Bauble, and canceling a single is the province of Eucatastrophe.

Pinchers · 95
I can relate to that last paragraph. Drew like 3-4 autofails once (it was a particully unlucky day) only to later put the Bauble into play and never drawing Autofail again --' — Nenananas · 207 7/3/21
I am preparing a Calvin Wright deck and I'm looking at this card to prevent the nasty autofail on a retaliate enemy for example, while running at 1-2 health and sanity. I am looking at mitigating the possibility of dying because of an unlucky pull mid-scenario. My other options are Third time's a charm, Against all odds. Both help me against -8 tokens for example, but are all preemptive, when the Nightmare Bauble is reactive. It also matters less that you may get it later in the scenario as it's only after a little while that dodging autofail matters. I am also betting on the fact that by the end of the campaign, I will have enough trauma to not need the Rabbit's foot at all anymore. — Valentin1331 · 8284 7/4/21
@Valentin Good thoughts. I generally skip the Rabbit's Foot with Calvin, too--but I always go heavy on the Cherished Keepsake and its upgrade. Let me know how it goes! — Pinchers · 95 7/4/21
The only use for this really is if you want a Pet Oozeling and you aren't Father Mateo. — Apologised · 3 12/30/21
I've got a question for this card: Via black market you could play a second copy of this. If you have relic hunter and the first one is still in game, are you allowed to play another one? It would be blank and kind of wasted but I thought the rules prohibt you from playing it since you cannot execute the forced effect in that case. — Scythe · 1 2/21/22
2

Once you get your XP going, you just don't really fear the autofail token as much anymore. How useful that will be depends on the rest of what you have going on, but dang, that can certainly open a lot more options.