Revelation - Put Yaztaroth into play in your threat area.

You cannot put assests into play. 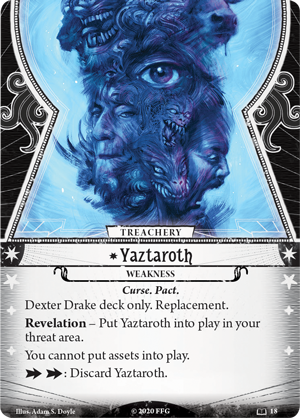 This is a very situational weakness. While you are never happy to see your demonic "friend" show up, sometimes it absolutely wrecks you, while other times you can limp to the end of the scenario without too many regrets. In some ways, it the exact opposite of Searching for Izzie or Cover Up, in that, if you have to draw it, the last turn or two is when you want to do do so. As usual with the to remove weaknesses, this has much greater impact in solo than multiplayer.

While this weakness is probably less annoying overall than Occult Scraps, the "box" signature weakness, neither is too terrible, making Dexter one of the investigators who should think seriously about including both sets of signature cards in one deck.

LivefromBenefitSt · 167
Pretty harmless most of the time, espcially with leo de luca and haste. But you know, when you're swarmed by enemies, your shriveling has run out and azur flame in hand... — Django · 2808 10/7/20
I have a friend who is adamant that "putting into play" does not affect the play action, and that this doesn't stop you playing assets but simply stop you from using your ability... — The_Wall · 176 10/10/20
Hmmmm. Technically... your friend is half right. "put into play" is a specific term that speciifcally excludes "playing" cards. However, Dexter's ability is also "playing" a card, so this Weakness doesn't do much but keep Anna Kaslow and Sleight of Hand from working as written. I think the intent of the card is to block you from playing assets, but the text is a bit more murky. — LivefromBenefitSt · 167 10/14/20