While Occult Scraps is in your hand, you get -2 .

While Occult Scraps is in play, you get -1 . 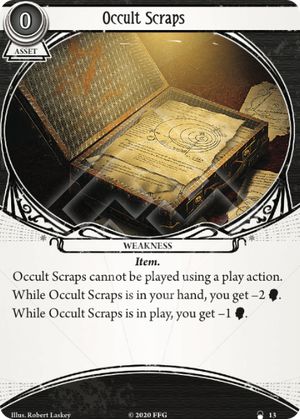 That's a great way to attack his play style. I really like this design.

DavidRyanAndersson · 46
I agree, the design here is very cool, and also lets him get a bit of value returned in the second turn. If you're willing to use other tricks, you can deal with it even faster - such as putting it in play with Sleight of Hand and immediately using his special ability on it to play another card. "Watch as I make these dangerously incomplete notes disappear!!!" — Death by Chocolate · 1170 10/3/20
4

Just in case anybody else has rules questions...

While Weaknesses are generally not allowed to be discarded from a player's hand, it's perfectly legal to discard a Weakness from play... assuming, of course, that the card doesn't say otherwise. And wouldn't you know it, this is the first Investigator Weakness asset that doesn't explicitly say "This can't leave play because reasons"!

Note that you still need to have an effect that discards it; you can never just remove cards in play because you feel like it. So yes, it works with Drake's ability, but you are also allowed to pitch it to Crypt Chill if you get so lucky.

Hylianpuffball · 20
Yeah, like the Tower, it can serve as an annoying shield with the right encounter stes, but it's not too hard to get rid of with Dexter's ability (unless Yaztaroth is in play, too, in which case, you did that to yourself). One quibble: most weaknesses tell you how to discard them, which is not quite "This can't leave play because reasons." Occult Scraps is kind of unique in that you have to intuit how to get it ff the table rather than spending actions or cards or something to do it. — LivefromBenefitSt · 908 10/8/20
"This can't leave play because reasons" is in reference to the first line of each of the linked cards, which all literally say "this can't leave play while [condition]" — Thatwasademo · 43 10/9/20
2

Another flavorful, specific-to this investigator's abilities, signature weakness. Looking at the two elements, the effect and the discard condition, we get:

The effect: One of the few weaknesses you can just hold onto, although -2 is a steep price. More likely, you will use Dexter Drake's special ability ASAP, kicking out another Asset (with luck a spent Flashlight or a Switchblade or something else cheap and useless) and suffer through a turn at -1 while waiting to ditch it for something else. if you get it during upkeep, that can make for an unpleasant Mythos phase, but what else is new? Dexter has enough options to take a -1 hit on tests for his abilities for a few actions, either by using other options like cards, testless stuff like moving and playing, or just powering through with various boosts. He's never going to want to see this, but it's hardly the most taxing in the game.

The discard condition: Use Dexter's special ability to replace this with any other Asset. Probably the turn after you play it.

All in all, this is a way below average signature weakness.

Box vs book The Scraps are paired with a fairly useful signature asset, Showmanship, and it doesn't compete with the "book" signature set, so players can easily chose to use either of both sets of options, with no clear winner.

LivefromBenefitSt · 908
I guess you can also use someone like Joey "The Rat" Vigil to play assets? or possibly even Sleight of hand? that way you'd be able to discard it the same turn? — Phoenixbadger · 177 3/8/21
There is one wacky scenario where this weakness is horrible, because you can't get rid of it unless you have a support card like Mr. Rat or get "lucky" from a certain enemy's attack. — MindControlMouse · 12 3/31/22
0

-Discard an Asset you control. For one round you get -1 willpower. -On the next round, discard occult scraps and play an asset for -1 resource cost.

It's a unique weakness that can actually be helpful in some circumstances. If you have a fully tapped spell, this is a way to clear it. Coupled with showmanship, you can possibly have a super turn on your next turn.