Revelation - Put Cover Up into play in your threat area, with 3 clues on it.

When you would discover 1 or more clues at your location: Discard that many clues from Cover Up instead.

Forced - When the game ends, if there are any clues on Cover Up: You suffer 1 mental trauma. 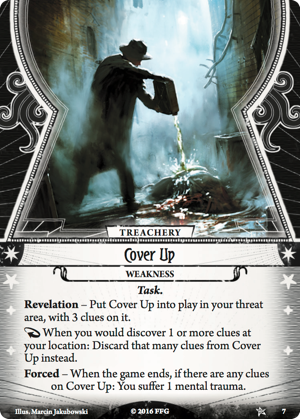 Playing Weakness cards in agreement with the rules is no trivial task. There are already some reviews regarding this especially complex card, Cover Up, but none so far that puts all pieces together to one whole image. In my review i will try to explain how this card is played according to the rules.

When a treachery card, like Cover Up, is drawn by an investigator, that investigator must resolve its effects. Please note the wording. Some cards only let you search or look at cards from your deck, in these cases the effect does not resolve!

The effect is initiated by the keyword Revelation, which means "When a weakness card enters an investigator's hand, that investigator must immediately resolve all revelation abilities on the card as if it were just drawn."

So you follow all the steps in the rulebook under "Appendix I: Initiation Sequence".

No play restriction, cost is zero.

Step 3. The card commences being played, or the effects of the ability attempt to initiate. This means the card Cover Up leaves your hand at this point.

Step 4. The effects of the ability (if not canceled in step 3) complete their initiation, and resolve. The card is regarded as played, but not placed in its owner's discard pile, because the text states "Put Cover Up into play in your threat area, with 3 clues on it."

So Cover Up lands in it's bearer's threat area. But unlike other card types there, it is a treachery card, which is a subtype of of an encounter card. And because of that, other players can interact with it. You will find the corresponding rule under "Weaknesses": Weaknesses with an encounter cardtype are, like other encounter cards, not controlled by any player.

The text of the ability states to "When you would discover 1 or more clues at your location: Discard that many clues from Cover Up instead." This should be broken down into two parts. First, the "When"-clause. You can only trigger that reaction if the trigger condition is met, meaning there has to be at least one clue present at that location. (I continue to speak in the singular form, because the rules do not differ if multiple clues are gathered at once.) The way in which you aquired that clue, does not matter. Now the clue remains at the location, because of the keyword "instead", this interrupts the resolving process and the replacement resolves, "a clue from Cover Up is discarded." Second, the "you" keyword is important. As clarified in the FAQ [V1.0, section 2.1], the "you" and "at your location" within this triggered ability, refer to the investigator triggering the ability. And other investigators beside the bearer are allowed to trigger it, as already explained, because the card is not controlled by any player.

Irrespective of the clue count on Cover Up, the card stays in Roland's threat area until the end of the game(=scenario). It can not be discarded and luckily can not be reshuffled into the investigator's deck during the game. Of course it remains being a part of the deck for the rest of the campaign.

If Roland is eliminated (by being defeated or taking a resign action) while Cover Up is in play, Cover Up's Forced effect triggers, as per the FAQ [V1.0, section 'Rulebook errata', topic "Elimination"]: For the purpose of resolving weakness cards, the game has ended for the eliminated investigator. Trigger any “when the game ends” abilities on each weakness the eliminated investigator owns that is in play. Then, remove those weaknesses from the game.”

This weakness makes Roland the most difficult to play character from the Core Set. He has a low base Sanity value and a low Willpower, which makes him vulnerable to horrifying events from the Encounter deck. I would advise new players to put some means to prevent or heal horror from Roland into their deck.

Synisill · 775
Interesting situation that occurred during Blood on the Altar: with Cover Up out, I reached the point that says to put all clues in play on (spoiler) - seemed like that included the clues on Cover Up as it is in play, clearing it on one side, while increasing the difficulty of the scenario task on the other. — jd9000 · 69 7/11/17
Funny!!! — Synisill · 775 7/11/17
Another funny situation I had: drawing the Mob Enforcer weakness during the first stage of House Always Wins - he is a criminal! — jd9000 · 69 7/11/17
I don't think this game has so far used the term "reveal from your deck" (instead using "looking" at a card or "searching" your deck), and probably with good reason, as it would be rather strange to not trigger the "Revelation:" effect when revealing a card. The only cards that are ever "revealed" are locations. — Scheckel · 101 7/12/17
I am sorry for this mistake, Scheckel, i am apologetic, because i am a non-native speaker. It is not easy to use the right terms all the time. I corrected my mistake in the review. — Synisill · 775 7/12/17
69
DadouXIII · 9695
At least others can help Roland investigate — bullettrang · 13 3/2/17
69

Poor Roland Banks. Out of all the Investigators seen so far in the Core Set and the Dunwich Legacy, Roland Banks is the investigator who suffers from an innate weakness which causes trauma to his lowest statistic (Sanity of just 5). Whereas others, like Jenny Barnes or Zoey Samaras have a bit more leeway to play with, Cover Up really emphasizes Roland Banks's pitiful Sanity.

Cover Up is one of the tougher Weaknesses to account for. As you need 3 clues on Cover Up, that's effectively 3 actions spent Investigating and not working towards advancing the Act Deck. There is also not a guarantee that you will succeed in Investigating; which would cause you to waste actions, and it may be especially hard to do so if there are only clues left in high Shroud locations. It's also quite possible that you might empty out all the available clues, and THEN draw Cover Up. If that is the case, you are out of luck, as with no clues on the board, it is impossible to trigger the Reaction ability of Cover Up.

As per the rules of cards in your threat area, fellow investigators at your location (and therefore, at the location of Cover Up), can help to contribute to adding clues to Cover Up by Investigating. This makes Cover Up less dangerous in multiplayer games, where other high Intellect investigators (like Daisy or Rex Murphy) can take care of Cover Up with less chance of failure. Additionally, cards that immediately discover clues like Working a Hunch, Evidence!, and Art Student can add clues to Cover Up. When it comes to deckbuilding Roland, you'll certainly want some of these clue-gathering cards to help him complete the Cover Up.

Since the FAQ1.0, if Roland is eliminated (defeated or resigned), Cover Up inflict mental trauma normaly :

This may seem obvious, but as someone that doesn't play standalone mode often and prefers campaign play instead this fact had escaped my notice: Cover Up really has no effect in standalone mode. And perhaps I'm being petty, but it feels pretty good to draw it and not have to pay any sort of attention to its presence. I think the word I'm looking for is empowered. It is is a wasted draw, but other than that its harmless. Heck, The Necronomicon is worse to pull in standalone. So spread the Good News! There are times when Roland just doesn't care about his weakness. (If only he had more Sanity...)

Everyone seems to think that this is a really bad weakness, and everyone is right. Looking at the two elements, the effect and the discard condition, we get:

The effect: Roland needs to discover 3 extra clues at a location that has clues. This seems fairly easy, since Roland is pretty good at getting clues with his off-class access and special ability, plus cards like Evidence! and Scene of the Crime. So it's handleable, if it goes down early, and the fact that any investigator can trigger the action, and a dedicated clue-getter can clear this tout de suite (as someone more Francophonic than Roland might say), but, if it goes down late or in a scenario where there aren't clues in the normal way or after they've been discovered, Roland is in for a world of trauma. Roland can hedge his bets by reserving a clue until the last moment and using cards like Dr. William T. Maleson and Forewarned to get it back on a location, lessening that late-scenario "clue desert" problem. Remember that, if Roland gets defeated with this thing out, he gets 2 trauma for his pains. And with a low starting Sanity, this weakness can be campaign-ending.

The discard condition: Discover an extra 3 clues from a location with at least 1 clue. At least it stays in your threat area, so it's a once per scenario problem.

All in all, this is a way above average signature weakness.

Box vs book You need to ask yourself if the pretty pistol is worth the pain of this card. If no, consider the "book" signatures, which are less nice but also less awful. If yes, maybe use the "box" set or both for some extra Roland-ness.

LivefromBenefitSt · 937
It seems odd that a clue is required to be at the location, when the rules do not state that a clue needs to be at a location to investigate. It only states that you investigate against a shroud value, then you discover a clue. Given that plenty of cards let you discover two clues, it follows that you can discover less clues than are available, but they simply go to waste. — eskimoform · 77 10/12/20
Given that it's so easy to draw this card with absolutely no clues available, its the natural expectation based on the games design and the actual text in the rules. — eskimoform · 77 10/12/20
Cover Up does not require you to Investigate, though; it requires you to "discover 1 or more clues at your location." You can investigate a location without any clues; Ursula's Weakness would be much worse and at least one Basic Weakness impossible if you couldn't. However, to discover a clue, there has to be a clue to discover. The Rules Reference under "Clues" makes it clear that clues "at a location" specifically means "undiscovered clues at that location." — LivefromBenefitSt · 937 10/14/20